Book review: Deterrence in the 21st Century – Insights from Theory and Practice 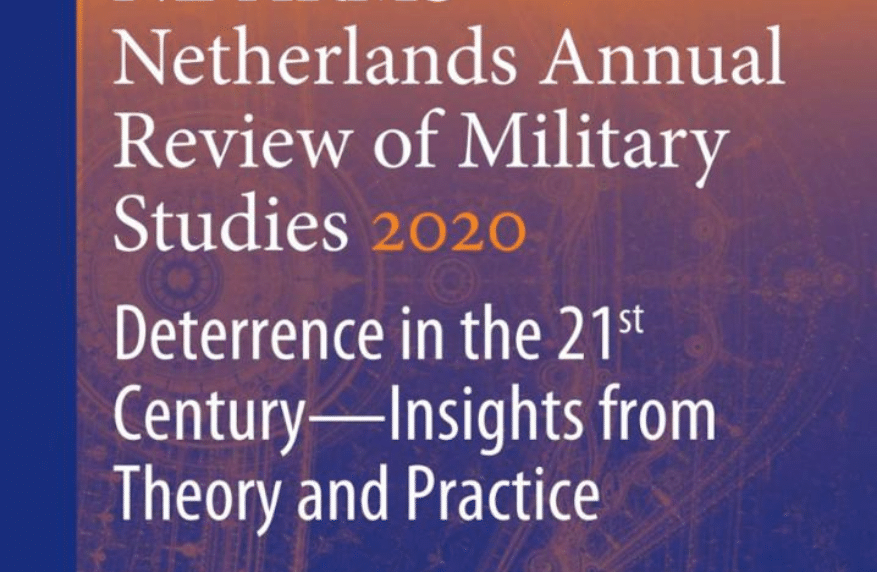 This is a most timely book. After the end of the Cold War, interest in deterrence waned, yet a more volatile security environment has brought it back with a vengeance. But what is deterrence really about?

Edited by Frans Osinga and Tim Sweijs, Deterrence in the 21st Century – Insights from Theory and Practice (free download) is the 2020 edition of the Netherlands Annual Review of Military Studies. In 26 chapters and over 500 pages, the contributors examine the concept of deterrence from every conceivable – and occasionally inconceivable – angle. Given the size and scope of this volume, this review will focus on those contributions that may be most relevant from a NATO perspective.

In his lucid introduction, Sir Lawrence Freedman, the doyen of deterrence research, argues that deterrence works best when clear red lines exist, when vital interests are at stake, and when capabilities are known. By contrast, even if deterrence “will continue to be seen as the ideal response to most types of security threats”, Freedman is much less confident when it comes to deterrence in the “grey area”.

Undeterred by this warning, the editors, claiming to lay the groundwork for a new wave of deterrence research, set out to explore deterrence from its core to its outer limits – and, by and large, they succeed.

In the first chapter, Michael Mazarr of the RAND Corporation explains the basics of deterrence, highlighting the need to understand the viewpoint of one’s opponent, and not just to focus on making threats but also on offering assurances.

Sten Rynning of the University of Southern Denmark analyses NATO’s post-Crimea reorientation towards deterring Russia – a reorientation that, due to NATO’s rather moderate force deployments in Eastern Europe, focuses on deterrence by punishment rather than by denial. Rynning is less worried about NATO’s deterrence posture than about what he sees as NATO’s limited ability to read the “character and intent of its rival”. In Rynning’s view, NATO continues – wrongly – to cultivate an image of Russia as a difficult partner rather than a threat.

Alexey Arbatov of the Institute of World Economy and International Relations in Moscow worries about the “self-destructive tendencies” inherent in nuclear deterrence, such as the continuous quest for new technologies like hypersonic missiles, which shorten warning times and thus could erode strategic stability. He is equally critical of concepts of limited nuclear war, which seek to control damage even after the start of a nuclear exchange.

Arbatov is also concerned that new nuclear and non-nuclear weapons systems will become indistinguishable, leading the other side to assume the worst, that is, a nuclear payload, and react accordingly. He also notes emerging parallels between US and Russian thinking on the continued importance of nuclear weapons. He makes a plea for a new approach to arms control that would take account of potentially destabilising new technologies.

MIT analyst Paul van Hooft dissects “extended deterrence”, namely the “nuclear umbrella” that the United States provides for its allies. His comparison of the different nuclear requirements for the European and Asian theatres is particularly insightful, as is his analysis of the credibility problems of the very concept of extended deterrence. However, his focus on military capabilities over politics makes his analysis overly alarmist, all the more so as he struggles to come up with viable alternatives. Extended nuclear deterrence may look precarious in theory, yet it appears to work pretty well in practice.

They use the concept of “strategic culture” to show “why Estonia and Latvia at first sight appear to be content with NATO’s recent strategy, but ‘secretly’ tending towards deterrence by denial and why Lithuania perceives NATO’s and its own strategy much more as deterrence by denial.”

The reader may wonder whether these differences should matter much in practice, as the key issue is what deters Russia, yet the authors believe that they do matter: “… NATO … needs to define its strategy more clearly. Different perceptions, not only in the host countries, point to a divide within NATO. It jeopardizes the alliance’s solidarity and commitment.” This is a non-conclusion deriving from a non-analysis. It confirms the warnings by the very inventor of the term “strategic culture”, Jack Snyder, that this concept should only be regarded as an “explanation of last resort”.

A new wave of deterrence research?

In a contribution that clearly forms the centrepiece of this volume, Tim Sweijs of The Hague Centre for Strategic Studies and Samuel Zilincik of the Masaryk University offer a comprehensive overview of cross domain deterrence — that is, the use of threats in one domain to deter activities in another. Arguing that a new wave of deterrence research has arrived, they state that “deterrence is no longer only about fear nor about convincing opponents to refrain from certain behaviour.”

Instead, they seek to reconceptualise deterrence “by making it about dissuading but also persuading instead of deterring.” This expanded concept of dissuasion “implies a more diverse range of instruments, both military and non-military, which can be used both as a stick and a carrot, both to compel and to deter, both to persuade and to dissuade, which brings it back to the broader coercive diplomacy literature from which it originally emerged.”

Alas, the authors offer no indications that any of these conceptual refinements actually work. To simply list the myriad of actions or combinations of actions – such as attribution, sanctions and cyberattacks – that a state could potentially undertake to dissuade an adversary from doing unwelcome things does not equal effective deterrence or dissuasion. Quite the contrary, in the real world, determined hybrid aggressors have proven fairly immune to the defender’s dissuasion measures. Why? Because their cost-benefit calculus does not correspond to Western expectations, and because many dissuasion measures that the authors enumerate are next to impossible to apply coherently in practice.

In his chapter on Russia, Dmitry Adamsky of Herzliya University notes that Russia’s understanding of deterrence is much broader than the West’s. “Deterrence à la Ruse stands for the use of threats, sometimes accompanied by limited use of force, to preserve the status quo (“to deter” in Western parlance), to change it (“to compel” in Western parlance), to shape the strategic environment within which the interaction occurs, to prevent escalation and to de-escalate during actual fighting.”

Adamsky argues that, after the collapse of the Soviet Union 1991, Russia developed a theory of achieving regional deterrence by nuclear means. This was followed by a phase in the early to mid-2000s, when Russian experts focused on non-nuclear deterrence. The third and current stage of theory development – which seeks to amalgamate the previous two stages – has been associated with the notion of “strategic deterrence”.

According to Adamsky, it is “a repertoire of interrelated influence efforts across all domains in accordance with the current understanding of the nature of war in Russia.” It implies not only the “demonstration of capability and resolve to use it … but also the actual employment of limited force to shape the strategic behaviour of the adversary.”

Adamsky explains the evolution of Russia’s deterrence thinking through the lens of that country’s “strategic culture”. He thus warns of the misperceptions that will occur should one try to apply the Western terminological framework to explain Russian concepts. Since Russia sees itself in a permanent struggle with its adversaries – and given the Kremlin’s sensitivity to the non-kinetic challenge of political subversion – Russia may opt for the use of force even in cases that the West would not consider worth doing so.

Dean Cheng of the Heritage Foundation notes that the Chinese deterrence terminology embodies both dissuasion and compellence. Nuclear weapons play an important part in this strategy. Although China’s nuclear arsenal is smaller than those of the United States and Russia, it is more than mere minimal deterrence. Cheng also explains “space deterrence”, economic means of deterrence and “information deterrence”, that is, compelling the adversary to abandon his resistance through the display of information advantage or the expression of deterrent/coercive information.

Eitan Shamir of the Begin-Sadat Centre looks at the challenge of deterring violent non-state actors, concluding that unlike in the case of nuclear deterrence, practice led theory. Deterring violent non-state actors was “like deterring crime and, after trial and error, successful practices [such as targeting the groups’ leadership or cash flow, or launching covert operations] have been developed and improved upon before being conceptualized as such.”

Some contributions in this volume sit uneasily with the others. For example, Cees van Doorn of the NL Army Reserve and Theo Brinkel of Leiden University analyse deterrence in the context of the downing of the Malaysian airliner MH17 over Ukraine in July 2014. Their interesting case study concludes that The Netherlands, although subject to a massive Russian disinformation campaign, handled the situation well, and that the Dutch population was resilient against Russian propaganda.

Their conclusion, however, that the case of flight MH17 offered “a prime example of how a resilient society can deter an actor from conducting effective disruptive campaigns” is a clear example of analytical overstretch. Not falling for a rather clumsy Russian disinformation campaign does not equal successful deterrence of the next campaign. Societal resilience is important, but if a similar tragedy were to happen again, would Moscow really be deterred from trying to lie its way through?

While some overly complex contributions in “Deterrence in the 21st century” bring to mind the warning expressed in an American country song – “don’t outsmart your common sense” – this volume is both a solid primer on the subject and a thought-provoking contribution to the evolution of deterrence research.

This review by Michael Rühle was originally published in NATO Review.

The book is now available in open access or as hardcover.