Deterrence in the 21st Century – “Conclusion: Insights from Theory and Practice” 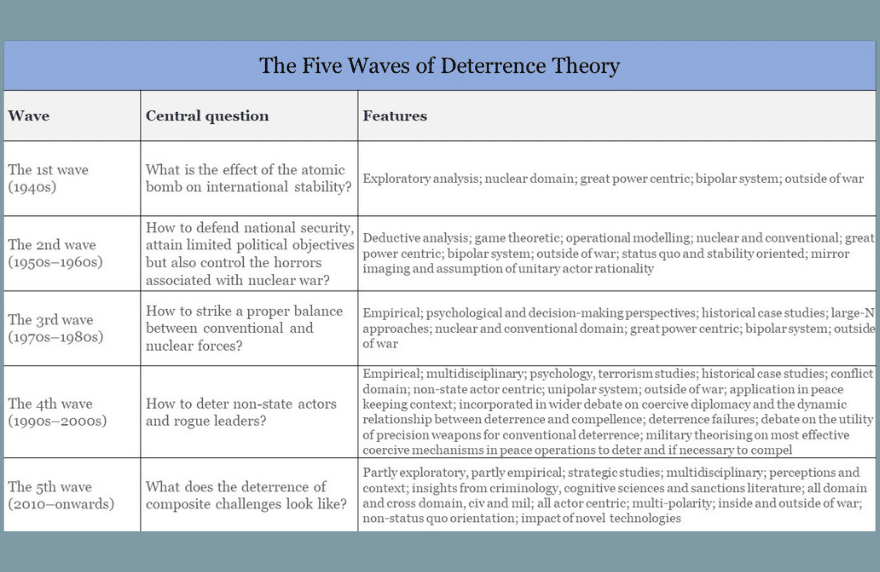 “Strategists are fond of saying that the nature of war is immutable, but its character is not. Even Von Clausewitz, whose very objective was to develop a general theory of war, held that every age has “its own kind of war, its own limiting conditions, and its own peculiar preconceptions.” The same can be said for strategy. History offers ample examples of strategic concepts that guide how means are to be connected to political ends in order to defeat adversaries in particular historical contexts. Warfighting concepts have included dislocation and exhaustion to target the adversary’s will, and attrition and annihilation to deal with its capabilities. In times of relative peace such concepts have included containment, assurance and most famously deterrence. The use and utility as well as the practical application—the character—of such concepts are context bound as they are determined by a range of social, economic, (geo-)political and technological factors. Some strategic concepts wither away and are consigned to the dustbin of history; other concepts persist and are updated to address the challenges of today’s world. Deterrence belongs to that latter category. It continues to feature as a prominent concept in contemporary strategic thinking and practice.

On the basis of 26 Chapters in the volume Deterrence in the 21st Century – Insights from Theory and Practice from some of the foremost authors from three continents, this Conclusion examines whether a fifth wave of deterrence theory is emerging. It reviews the assortment of military-strategic, technological, and socio-political developments that pose a variety of challenges to deterrence. Great powers are modernizing their nuclear arsenals. Long-range missile systems are proliferating rapidly. Offensive cyber capabilities pose a direct threat to the integrity of nuclear C2 structures. Sensor technology and algorithms are undermining old Cold War concepts such as Mutually Assured Destruction. Non-state groups are gaining ever greater clout. And new integrated deterrence concepts from countries like Iran, China and Russia make no distinction between war and peace, military and civil, and defensive and offensive.”

The War of Tomorrow: How are novel military technologies changing modern co...
Scroll to top