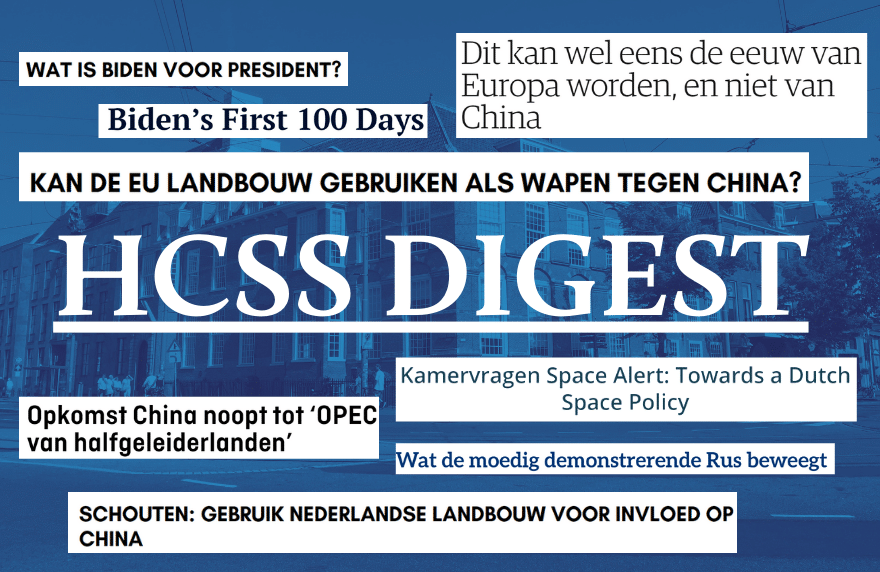 Can the Netherlands use it strong agricultural position for geopolitics? Should Dutch politicians pay more attention to a space policy? And just what kind of president is Joe Biden, 100 days into his term? Find out in a fresh HCSS Digest!

How does the Netherlands position itself worldwide as an agricultural powerhouse? Can we use our strong agricultural position to influence China? Is the Netherlands too dependent on other countries? In short, what will our foreign food policy be? Listen to outgoing Minister of Agriculture, Nature and Food Quality Carola Schouten in the BNR/HCSS podcast De Strateeg.

Responding to the podcast on BNR Nieuwsradio, HCSS Deputy Director Michel Rademaker stated he’s also in favor of using agriculture as a means of pressure. ‘The trick is to link a European or Dutch interest to a Chinese interest. We can use agricultural goods in exchange for, for example, raw materials that we need for the energy transition.’

The Netherlands can play a major geopolitical role and limit Chinese power on the world market, by setting up an OPEC for semiconductor producing countries together with other countries, Paul Verhagen wrote in an op-ed for Elsevier Weekblad.

The EU is increasingly becoming the protector of our prosperity and way of life against emerging superpowers, which, according to Rob de Wijk, is due to the increased regulatory power in Brussels, he writes in an op-ed in NRC this week. Xi has been overplaying his hand for over a year now. The European Union can no longer be run over. In fact, the 21st century may well become the century of Europe and not that of China.

Biden promised a radical change of course from Trump under the guise of “America is Back”. The US would return as a leader on the world stage under Biden’s presidency. Does the world look different under the new President, or is he still continuing some of his predecessor’s policies? In NPO Radio 1’s Fris, HCSS very own Paul Verhagen looks back.

What role does soft power play in contemporary conflict dynamics? Find out on May 3rd in a presentation by HCSS Strategic Analyst Dorith Kool for the SIB (Dutch United Student Association in Amsterdam).

PODCAST: Analyzing the first 100 days of the Biden administration: listen to HCSS data scientist Paul Verhagen in the final US Special podcast by Jonge Atlantici.

Many Russians took to the streets for opposition leader Navalny, and 1500 people were arrested. On NPO Radio 1’s Nieuwsweekend, Helga Salemon, HCSS Russia expert, analyzed what drives these citizens to risk their lives for Navalny, who decided to return to Russia went on a hunger strike.

“The speed with which Biden is demolishing Trump’s legacy is something to think about. Because his successor could do the same,” Rob de Wijk wrote in his weekly column in Trouw, about the change in American foreign policy and the consequences for transatlantic relations.

And in other news… did you notice HCSS has a new website?

Book review: Deterrence in the 21st Century – Insights from Theory and Pr...
Scroll to top