Teer and Sweijs in The Diplomat: If China Attacks Taiwan, What Will Europe Do? 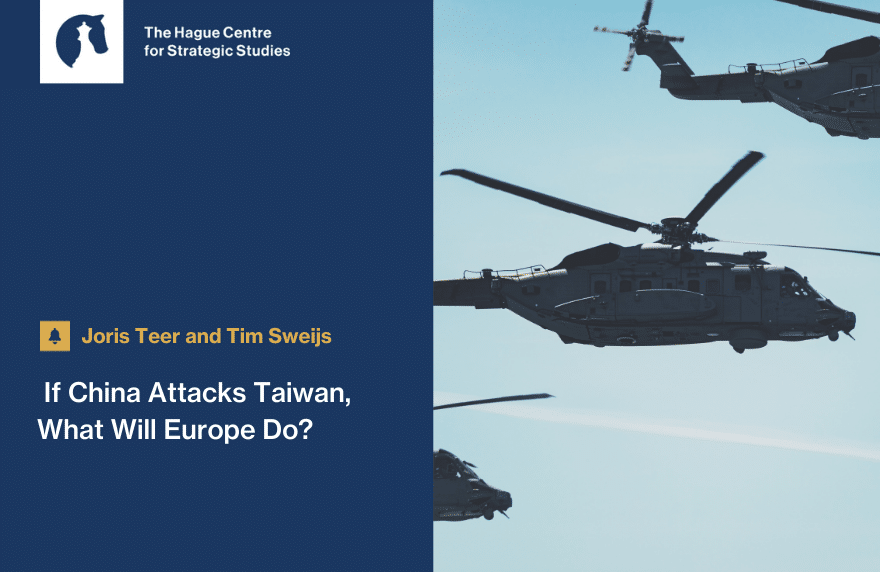 The risks are great. The situation is different from the crisis in 1996, when Bill Clinton ordered two carrier battle groups – at the time, the symbol of U.S. military dominance – sail through the Taiwan Strait to deter China. Beijing could do nothing but watch from the sidelines. This time, China has a home game advantage with its sophisticated missile arsenal threatening to sink U.S. aircraft carriers.

The United States invokes the AUKUS Pact, the three-year-old defense treaty between the United States, United Kingdom, and Australia. Biden asks the British aircraft carrier group to execute a relatively low-risk operation: a blockade of the Malacca Strait to throttle China’s oil supply and trade. The Dutch air defense frigate Zr.Ms. Evertsen is part of the British squadron. A nearby French aircraft carrier group and a German frigate receive the same request.

The British join in. Do the Dutch, French, and Germans follow?

Rutte speaks with relevant ministers and security advisers and tries to reach the leaders of France and Germany. Beijing is expected to consider a blockade to be an act of war. Can European ports and gas network withstand massive cyberattacks in retaliation? Are European ships sailing in the combat range of the Chinese army base in Djibouti and/or ships of the People’s Liberation Army Navy? Will Dutch, German, and French nationals in China stay safe? How will the Netherlands and Europe still get rare earth metals and essential goods from China?

On the other hand, if the Dutch, French, and Germans deny the request, the American reaction will not be kind. Will Biden maintain the U.S. security guarantee to Europe? Will the more than 60,000 American soldiers remain on the European continent? Given the deplorable state of European forces, there are concerns that Russian President Vladimir Putin could pounce on the discord within NATO to again create a fait accompli on Europe’s eastern borders, like Russia did with the annexation of Crimea in 2014.

In short: the decisions that The Hague, Paris, and Berlin take in the event of a Chinese attack on Taiwan are likely to determine Europe’s place in the world for decades to come.

The Taiwan Scenario: Capabilities and Intentions

A direct confrontation between two nuclear great powers is the geopolitical doomsday scenario of our time. It is uncertain whether China will attempt to use force to annex Taiwan, warnings from U.S. Admiral Philip Davidson that this threat will manifest sometime in “the next six years” notwithstanding. It is also not entirely clear that the Americans would intervene.

Wars, however, seldom appear as thunderbolts from a clear sky; they are usually preceded by expressed intentions to use force if necessary, combined with the steady build-up of military capabilities. There is no question that China is becoming increasingly assertive on the global stage and increasingly aggressive in its own region, while the U.S. is increasingly taking initiatives to counter China.

Both sides place a special emphasis on the fate of Taiwan. “Reunification” with Taiwan is Xi’s top priority, directly linked to his mission to achieve the “great rejuvenation of the Chinese nation.” During the chaotic retreat from Afghanistan, Biden spoke of the United States’ “sacred commitment” to Taiwan, in the same breath as the United States’ security guarantees to NATO, South Korea, and Japan. Last week, Biden explicitly said the United States would intervene if Taiwan came under attack.

Then there are China’s rapidly expanding military capabilities. Faced with U.S. military dominance during the 1991 Gulf War and the Taiwan Strait crisis in 1996, China began to modernize its military apparatus. At the 19th National Party Congress in 2017, 2035 was officially established as the moment to achieve this goal, with China to be a “world leading military power” by 2050. The main goal: to be able to win a war in China’s own backyard.

In the last 10 years in particular, this process has taken off. Beijing invested heavily in the mechanization and mobility of its ground forces and developed the most sophisticated missile arsenal in the world. China now has a robust anti-access and area denial capability, which is military jargon for the ability to deny adversaries (read: the United States and its allies) access to a region (read: the Taiwan Strait). Finally, China’s unparalleled industry provides the foundation for rapid further expansion of its capabilities. In 2020, China built 40 percent of all ships worldwide, while the U.S., U.K., France, and Germany together accounted for less than 1 percent.

How can Europe prepare for this diabolical dilemma? First of all, its leaders must recognize that hard competition between the great powers is again one, if not the most important, characteristic of the international system, just as it was during the Cold War.

Europe must define what collective defense would look like without the United States, especially now that the U.S. is no longer able to carry out a “Two-War Strategy,” the simultaneous waging and winning of wars against two great powers on different continents. A two-track policy should be pursued with regard to Russia. On the one hand, investments must be made in conventional deterrence of Russia. In concrete terms, this involves increasing the military preparedness of units, accelerating troop movement initiatives, purchasing long-range artillery, and strengthening command and coordination structures to direct operations even without the Americans. On the other hand, another European effort should be made to ease tensions with Russia, as French President Emmanuel Macron also suggested. Ultimately, conflict can only be resolved through political means.

Unlike in the Cold War, the world is economically and technologically intertwined. Europe cannot change China’s intentions. Xi’s levers of influence over Europe can, however, be reduced. Expanding export controls and investment screening regimes targeting dual-use goods and new technologies will help prevent the People’s Liberation Army from filling fundamental flaws in its capabilities using European resources, such as anti-submarine warfare and fighter jet technology. Dependencies on China in strategic sectors must be reduced. Caps, trousers, and sofas can still be imported from China in 2024. Nuclear technology, 5G networks, and police drones cannot. In addition, Europe must also prevent a next generation of dependencies within critical infrastructure from coming into being through the energy transition. Geopolitical analysts should participate in climate policymaking to prevent generating such dependencies.

Even if the Netherlands and Europe take all these measures, the choice between either supporting the United States or staying away from confrontation will affect Europe’s security and prosperity for decades. A decision on this must therefore be taken long before a crisis erupts, with broad political and social support, and should be coordinated by European states. As a first step, this subject must be included on the European Council agenda in the near future. A decision of this magnitude is too important to be left to politicians in the middle of the night.

This op-ed was published by The Diplomat on October 28, 2021; it is an extended version of an article originally published in NRC (in Dutch).

Dr. Tim Sweijs is director of research at HCSS.

Together, they are co-authors of the upcoming report “China’s Military Rise and the Implications for European Security,” which the Hague Centre for Strategic Studies wrote in collaboration with the Australian Strategic Policy Institute (ASPI).