Jagannath Panda in The National Interest: How Will the 20th National Congress Change China? 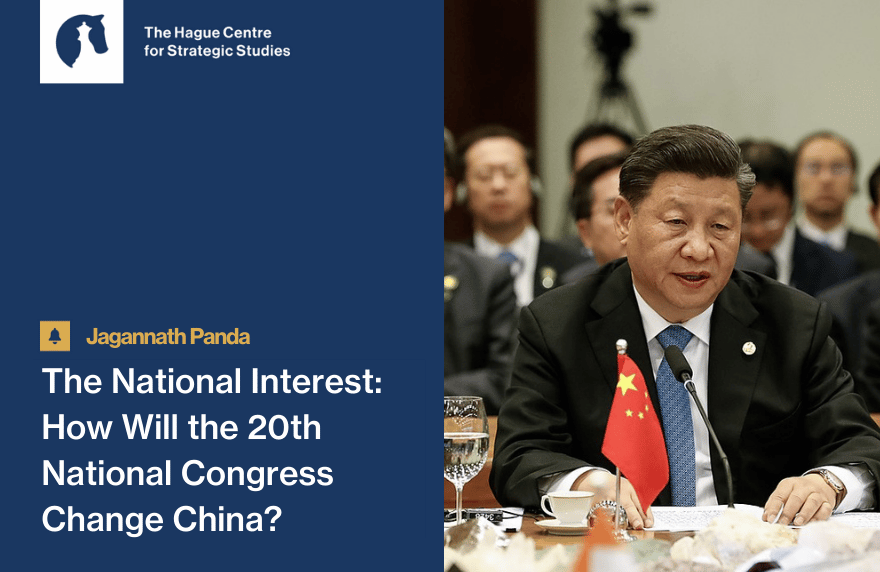 It may be a forgone conclusion that Chinese president Xi Jinping will be coronated for the third time since he assumed power in 2013 at the upcoming 20th National Congress of the Chinese Communist Party (CCP). Indeed, some would say that the sixty-nine-year-old “core” leader’s future path was set in 2018 when the National People’s Congress voted to abolish term limits for the presidency. However, at home, the cumulative effects of the sluggish economy, including energy and property crises, and public disenchantment with the CCP’s uncompromising “dynamic zero COVID” policy are taking a toll.

In the global arena, too, China faces new challenges—from growing transatlantic agreement that China is a “strategic threat” to uneasy ties with neighbors such as Japan and India. Moreover, the collapse of debt-ridden economies (e.g., Sri Lanka) has compounded concerns about Xi’s prized Belt and Road Initiative (BRI), while China’s escalating crisis with the United States over Taiwan has disturbed Xi’s path to the coronation.

Consequently, although Xi has consolidated enough power and crushed domestic dissent, his “China dream” of rejuvenation, prosperity, and modernization is cluttered with ideological hogwash—China is shifting further inward toward totalitarianism and fast losing its carefully built competitive edge.

With the CCP’s 20th National Congress set to delineate priorities for China’s political, economic, and diplomatic rejuvenation to revive its “Peking Model,” one can identify some critical characteristics going forward.

This congress is taking place against the backdrop of a looming succession crisis. As far as China’s next-generation leadership is concerned, Xi’s quest for continued power has not allowed political consensus for future leadership to flourish, in contrast to the system of “peaceful” transfer of power in the post-Mao era. For example, Hu Jintao’s tenure as president witnessed the rise of the “institutionalization” in civilian and military spheres that helped in identifying the next generation brass, which Xi’s ascent to power has systematically diminished. In fact, Xi’s political and, especially, military purges along with his repeated rhetorical assertions of absolute loyalty to the party indicate the insecurities inherent in his precarious future, especially as a de facto “leader for life.” This is a return to an orthodox ideological worldview evidenced in Xi’s economic and foreign policy approaches (e.g., wolf-warrior diplomacy and continued support to rogue states of Russia and North Korea)—which the majority of Chinese elites, who are “fence-sitters,” as well as a sizable proportion of the younger demographic that is used to the consumerism and comforts of a rising China, may not subscribe to. The longer the delay in identifying potential successors (by 2027, only officials born in the 1970s would satisfy the age requirement, and hence likely be political neophytes), the greater will be the impact of the power vacuum created by Xi’s departure, sudden or otherwise. Notably, the effects of the instability, if there is no succession plan, would be felt globally.

Further, a deeper symbiosis between the People’s Liberation Army (PLA) and CCP will reflect the much-needed chemistry that the civilian and military apparatus should have in China. However, as the leaner and more modernized PLA acts to defend the CCP’s national sovereignty, security, and development interests (“active defense”), Xi will maintain total control. For example, the military—without any representation in the top-echelon standing committee immediately under Xi (and only two members in the twenty-five-member politburo)—has been content to exert little power over Chinese diplomatic and defense policy decision-making. Moreover, the Central Military Commission (CMC), the highest military decision-making body that oversees the PLA and was downsized in the nineteenth CCP National Congress, is headed by Xi (who has operational control as commander-in-chief) and his loyalists. Thus, Xi’s decision to downsize the CMC and purge the military aimed to ensure total party loyalty (i.e., to Xi) and reflect his absolute control over military affairs. With four of the six CMC members set to retire after the 2022 session, the new set of leaders is unlikely to veer away from Xi’s agenda. It only reasserts the weakening of the party’s institutional character (which was at its peak during Hu’s tenure) in deference to Xi’s personalistic centralized control, which is here to stay.

As the national congress congregates, the BRI, Xi’s multi-million-dollar flagship political-economic project, will also complete nearly a decade in action. The results have been mixed. On the one hand, the West has had to initiate multiple infrastructure projects (e.g., Build Better World and Global Gateway) to counter the BRI’s influence. Yet, on the other, the program has been increasingly mired in controversy in recent years, because its humongous scale and China’s hard-nosed policies have made it unviable—and China has been widely criticized for plunging weak economies into “debt traps.” As seen in the recent case of Sri Lanka, even though the debt crises are often a result of internal mismanagement, the developing world has come to recognize that China’s diplomacy is more “ruthlessly self-interested” than benevolent.

Since Xi is wary of the unchecked growth of private capital and desires greater state control over private enterprises amid the rising centrality of new technologies in today’s geopolitics, the 20th Central Committee, elected by the national congress, is likely to expand the number of technocrats in CCP strategic circles. One study estimates a 32.5 percent representation in 2022 as compared to 17.6 percent in 2017.

However, China is currently stuck in a regressing economic narrative; the severe lockdowns have compounded the effects on both industry and the public at large. In addition, Xi’s adoption of “forceful” measures to achieve socio-economic goals (e.g., his earlier crackdown on big tech companies) has reduced foreign investors’ trust and made appear China less predictable. Yet, a more insular path to China’s economy is unlikely to be opposed in the 20th National Congress—neither will Xi’s rather questionable leadership in the recent past.

Despite China’s present domestic troubles, Xi and the CCP are united in their inflexibility on restive regions such as Tibet, Xinjiang, and Hong Kong. To bolster his domestic credentials, Xi has visited all three regions in the last year: Tibet, the first presidential visit in thirty years (July 2021); Hong Kong, Xi’s first trip outside of mainland China in about two years (June 2022); and Xinjiang, his first visit to the restive province in eight years (July 2022). Notably, Xi’s speech in Hong Kong to mark the twenty-fifth anniversary of its return to Chinese rule highlighted the successful application of the “one country, two systems” governance model and the rejection of anyone “unpatriotic,” which is more than a nod to the Taiwan crisis. Thus, Xi’s campaign to reunify with Taiwan will likely receive a renewed mandate.

Further, Beijing is likely to double down on building its own global axis. For example, China’s tacit support for Russia’s war in Ukraine has continued despite that it has weakened Beijing’s position in Europe. This is also evidenced by China’s defense of North Korea, an internationally isolated and self-declared nuclear state, even though Beijing retains long-standing concerns about Pyongyang’s possession of nuclear weapons. Yet, Pyongyang’s stability and the U.S. influence on the Korean Peninsula are overriding concerns. In this regard, China’s push to coalesce the Global South via forums like the Shanghai Cooperation Organization (SCO) to counter the U.S.-instigated “exclusive cliques” (e.g., the Quad) and “color revolution,” especially in the Indo-Pacific, will support Xi’s efforts to upend the existing order, as laid out in the Russia-China joint statement earlier this year.

To be sure, even though the last decade has highlighted how global geopolitics are rapidly changing, Xi Jinping and the CCP would not have anticipated that the 20th National Congress would be in the midst of an era-defining year, especially one that would complicate China’s “national rejuvenation” and global dominance ambitions. The wide-ranging tribulations and ramifications of the ongoing Russia-Ukraine war, India’s defiance to place border disputes above “practical cooperation” with China, and the clear-cut U.S. shift toward a reconfiguration of its Taiwan policy—in concert with the domestic economic instability—will certainly influence the mindset of the broadly representative 2,296 delegates, even if they are “elected” for their “correct” political stance or importantly, even if for the CCP under Xi, it will be business as usual for the coming years.