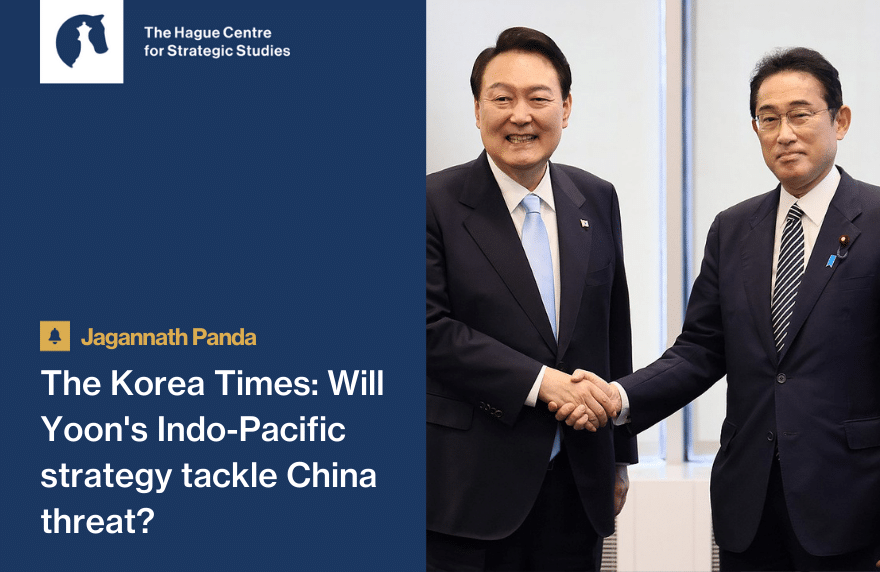 By Jagannath Panda and Mitch Shin

In late December 2022, South Korea, under the relatively new presidency of Yoon Suk Yeol effectively concluded its policy shift from strategic ambiguity by releasing the “Strategy for a Free, Peaceful and Prosperous Indo-Pacific Region.”

One of the most important features is its focus on “future-oriented” diplomacy, namely the centrality of “collective” partnerships with Indo-Pacific allies to build a sustainable and resilient regional order. The strategy envisions the ultimate goal of developing the Republic of Korea (ROK) as a “Global Pivotal State” ― which has been the mainstay of Yoon’s doctrine.

Until Yoon took office in March, South Korea’s regional strategy involved hedging its bets. As a state that is highly reliant on China for its economic sustenance and the United States ― its principal ally ― for its security considerations, South Korea has long avoided siding with either great power.

The difficulty of managing bilateral relations with both China and the U.S. pre-dates the Yoon administration; different governments have sought to manage the country’s security versus trade dilemma, which is always influenced by the U.S.-China rivalry through various strategies ― and with varying degrees of success.

To some extent, Yoon’s Indo-Pacific policy is the present administration’s response to the geopolitical complexities that have arisen with the intensifying great power competition and ever-widening divergence between the U.S. and China.

In line with South Korea’s cautious (yet bold) positioning of itself between its two indispensable major partners, Beijing and Washington, Seoul’s Indo-Pacific strategy is prudent, pragmatic and a way to enhance systematic flexibility. It also contributes to creating a balancing act against great power politics.

It highlights South Korea’s plans to pursue deeper partnerships beyond China and the U.S., through Indo-Pacific partners like the Association of Southeast Asian Nations (ASEAN), Japan, Canada, Mongolia, India, Australia and New Zealand, as well as like-minded states in the Middle East, Africa (on the Indian Ocean coast), Europe and Latin America.

In other words, by expanding the country’s trade, investment and security relationships beyond China and the U.S., the Yoon government is looking to preserve national and regional prosperity and stability and enhance South Korean leadership in the region.

At the same time, the strategy barely mentions China, which in itself is evidence of Seoul’s determination to continue seeking a carefully calibrated balance between its largest trade partner and military ally, China and the U.S., respectively. In fact, China is recognized as a “key partner for achieving prosperity and peace in the Indo-Pacific” as Seoul aims to “nurture a sounder and more mature relationship” with Beijing that is built upon “mutual respect and reciprocity” and “guided by international norms and rules.”

Although Yoon indicated he would take a tough line on China during his presidential campaign, South Korea’s interdependence with China makes any outright alignment with the U.S. and against China unsustainable. While the U.S. and its allies like Japan and Australia (and to some extent India) have openly criticized China’s attempts to assert its maritime and territorial claims and unilaterally change the status quo, plus, its actions of violating human rights in Hong Kong and Xinjiang, South Korea has taken a more muted stance so as to avoid antagonizing China.

In other words, South Korea’s Indo-Pacific strategy is constrained by the country’s high export dependency, which demonstrates the limitations and risks that it faces in totally transforming its regional geopolitics and its struggle to formulate a long-term sustainable radical vision.

However, South Korea’s Indo-Pacific policy does indirectly feature the China threat and Seoul’s commitment to countering it. For instance, the strategy raises concerns over Chinese military actions in the Taiwan Strait and reaffirms Seoul’s commitment to peace and security in the Taiwan Strait, as a factor critical to maintaining stability on the Korean Peninsula and the Indo-Pacific at large.

At the same time, the policy highlights the importance of peace, stability, and freedom of navigation in the South China Sea, especially due to its strategic significance for sea lines of communication and trade routes.

North Korea, on the other hand, has been clearly labeled as a “serious threat to peace and stability” not just in East Asia but globally. The heightened trilateral cooperation measures with the U.S. and Japan ― with which relations have been historically fraught ― highlight that deterrence will remain the favored method over dialogue vis-a-vis North Korea. In that respect, the dependence on China, which has been a critical stakeholder in the negotiations between the two Koreas, will be considerably reduced.

Notably, South Korea’s announcement of its Indo-Pacific policy and declaration of gradually building cooperation with the increasingly relevant Quadrilateral Security Dialogue or Quad ― comprising the U.S., Japan, Australia and India ― demonstrates a marked shift toward internalizing the Indo-Pacific concept. It solidifies South Korea’s intent to acquire greater strategic and foreign policy autonomy, as well as to transform from a peripheral player to a central one by capitalizing on its as yet underutilized middle power status and capabilities.

Therefore, even though South Korea’s strategy for a free, peaceful and prosperous Indo-Pacific region seems at the outset, only mildly concerned with the threat posed by China, it has taken a non-confrontational but reasonable approach. However, whether the strategy’s implementation to address the North Korean and Chinese threats will be effective in practice will depend on not only geopolitical headwinds but also how well the Yoon government is able to manage the South’s bilateral relationship with China and the U.S., as well as the potential contradictions between economic growth, supply chain resiliency and security.

Jagannath Panda in The Diplomat: The Tawang Effect: Forecasting China-India...