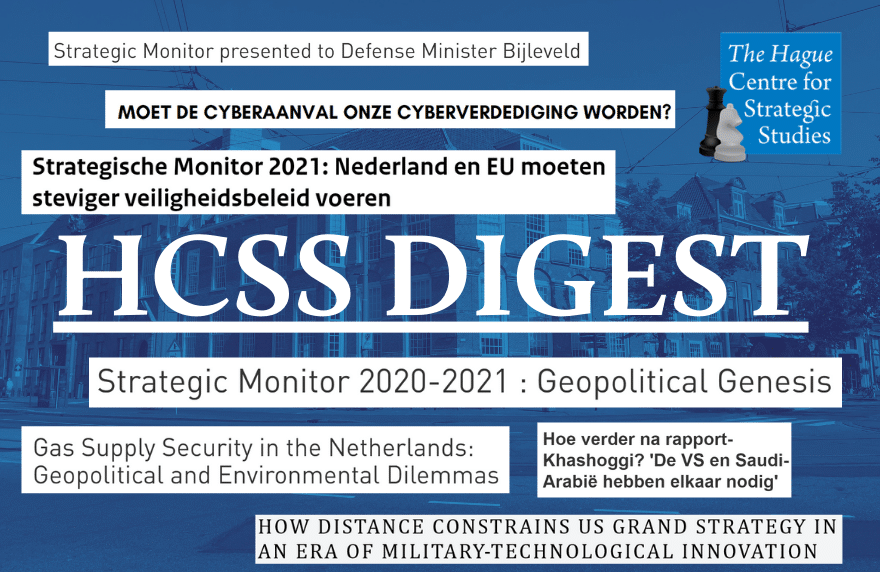 It is time for the geopolitical genesis of the Netherlands? Should offensive cyber actions become part of our cyber strategy? Is our gas supply security at risk? And what is the fifth wave of deterrence theory?

Your weekly HCSS Digest is here to give you the answers!

Yesterday, HCSS and the Clingendael Institute presented their Strategic Monitor, “Geopolitical Genesis: Dutch Foreign and Security Policy in a Post-COVID World”. The two Dutch think tanks stress that the time is now for Europe to adopt a more assertive geopolitical stance as a nascent world power, this being the only way to safeguard the Dutch and European interests and values.

Clingendael researcher Danny Pronk and our very own Jack Thompson presented the Strategic Monitor to the Minister of Defense, Ank Bijleveld, who also received it on behalf of the Minister of Foreign Affairs.

“This Strategic Monitor underlines our own analysis and makes the need for Dutch investments in security and therefore also in defense crystal clear,” Minister Bijleveld commented. “This cabinet has taken a good first step, but more is needed. We must not look away from the growing threats and changing relationships in the world. We must face it and act accordingly.”

Offensive cyber actions are now part of the US cyber strategy. Does it discourage potential adversaries? And should the Netherlands and the EU do the same? Paul van Liempt discusses this hot topic with ‘Cyber Kees’ Verhoeven  in a new episode of De Strateeg on BNR Nieuwsradio, with contributions from HCSS Strategic Analyst Louk Faesen, who recently wrote an article about Persistent Engagement in the Cyber Domain.

Growing dependence on Russian natural gas and foreign LNG poses significant geopolitical and environmental risks for the Dutch gas supply security. Find out more in the latest paper on Gas Supply Security in the Netherlands by Irina Patrahau and Lucia van Geuns.

The sanctions Washington imposed on Saudi-Arabia for the murder of journalist Khashoggi are largely symbolic, Rob de Wijk explained on the NOS Radio 1 news. Biden’s focus will be on maintaining balance in the Middle East, so the US needs to strike a balance between keeping warm ties at a higher strategic level and reprimanding at a lower level.

Your old road is rapidly agin’, for the times they are a-changin’. Read all about the emerging fifth wave of deterrence theory in the conclusion of Tim Sweijs and Frans Osinga’s “Deterrence in the 21st Century”.

The “tyranny of distance” means the US is both safe from attack, but also militarily overextends itself overseas. Next Tuesday, March 9th, HCSS Senior Strategic Analyst Paul van Hooft will give an online seminar for the Changing Character of War Centre (CCW), where he explains how this distance constrains US grand strategy in its competition with China.

Quantum computing is revolutionizing encryption and cybersecurity. In the latest EYpodcast on Spotify, HCSS Data Scientist Paul Verhagen  discusses the implications of the global race for quantum supremacy on Europe’s security & strategic autonomy.

“The Gulf War wouldn’t have been so successful if the space domain hadn’t been used”, HCSS Strategic Analyst Patrick Bolder commented during the Webinar on Military Space organized by SpaceNed and NIDV. Military conflict is constantly changing, he added, and defense and industry need to cooperate more in a European context.