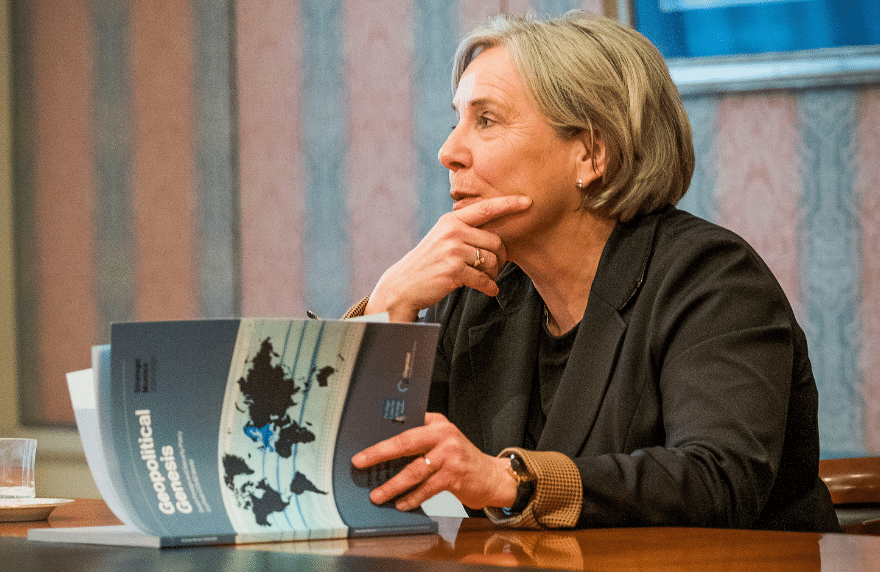 The Hague, March 3, 2021 – Researchers Danny Pronk and Jack Thompson from the Clingendael Institute and The Hague Centre for Strategic Studies (HCSS) presented the Strategic Monitor “Geopolitical Genesis: Dutch Foreign and Security Policy in a Post-COVID World” to the Minister of Defense, Ank Bijleveld, who also received it on behalf of the Ministry of Foreign Affairs.

With their annual report, both think tanks provide insight into trends and developments in world politics. The main theme of this report is that now is the time for the European Union to consolidate its status as a nascent world power, and the Netherlands must play an active role in this.

“This conclusion in the Strategic Monitor underlines our own analysis and makes the need for Dutch investments in security and therefore also in Defense crystal clear,” says Minister Ank Bijleveld-Schouten. “With 1.7 billion in structural investments and 1.7 billion incidentally, this cabinet has taken a good first step, but more is needed. We must not look away from the growing threats and changing relationships in the world. We must face it and act accordingly. And be a reliable ally as well.”

The Strategic Monitor can be consulted here.

The report describes six major challenges that the Netherlands and the EU will face in the post-corona world over the next ten years:

No “return to normal”

The researchers argue that there will be no “return to normal” of trans-Atlantic relations, not even under President Biden. Europe will have to take more responsibility for its own defense and pursue an independent foreign policy. The Netherlands can play a bridging role here, but that requires more European cooperation. This is necessary in order to increase the influence of a relatively small country like the Netherlands, but also to form a united front against the divide and rule tactics of China. While China remains an important economic partner, it is necessary to come up with a unified European response to the increasingly aggressive stance of both China and Russia.

The Strategic Monitor provides recommendations for Dutch foreign and security policy to meet these varied challenges:

These recommendations are not exhaustive, but provide a global blueprint for future Dutch foreign and security policy, both to help strengthen the EU’s status as a burgeoning global power and to effectively tackle the complex challenges of today and the next decade. From the point of view of this report, this is indispensable to the geopolitical genesis of the Netherlands.

About the Clingendael Institute

The Netherlands Institute for International Relations ‘Clingendael’ is an independent think tank and academy in the field of international relations. We want to inspire and equip governments, businesses, NGOs and society in a broader sense with research and analyses, training courses and public debate. In this way we contribute to a safe, sustainable and just world. Clingendael is in the global ranking of think tanks in 25th place in the world and in the top 5 in Western Europe. For more information see their website.

About The Hague Centre for Strategic Studies (HCSS)

The Hague Centre for Strategic Studies is engaged in strategic research in the field of peace and security. The HCSS provides advice on international and national defense and security issues, geopolitical developments and trends, conflict management, defense transformation and terrorism to the government, international institutions and the business community. For more information, see their website.  ​