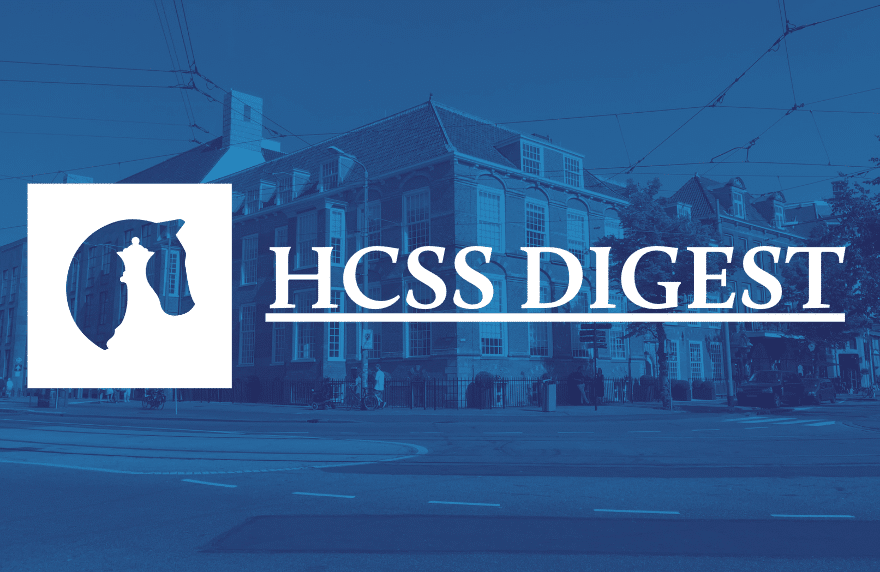 It was Destination Europe for the POTUS this week, raising two important questions:

– Would would blink first, Biden or Putin?

– What to do with China?

Find out what our analysts and experts had to say in the latest HCSS Digest!

How can a small country such as the Netherlands benefit from the increasing importance of space? Find out on July 1, during an online HCSS Expert Session on the Dutch footprint in space organized by HCSS, with experts, politicians and representatives of the Dutch space industry, such as Eelco van der Eijk, Frank Meiboom and Hugo van Manen, moderated by Tim Sweijs.

“China wants to become the most powerful country on earth. But that also includes space. This is a step in that direction,” strategic analyst Patrick Bolder commented on RTL Nieuws about the launch of a Chinese crew to space station Tiangong.

HCSS is proud to welcome Frederick S. Pardee Center for International Futures research associate Collin Meisel as our new subject matter expert. Be on the lookout in the coming months and beyond as we take HCSS & Pardee research to new heights!

As the cafés open up again, so does a vacancy in the HCSS internship program. Are you a student interested in applying your knowledge of geopolitics, climate security, global trends, and geo-economics at an international think tank in the centre of The Hague? Apply now for the General Internship – or the Cyber Program Internship – and don’t miss out!

Europe is being attacked from all sides. Nevertheless, Rob de Wijk draws a positive conclusion about “the battle for Europe” in his column for the Montesquieu Institute: European regulatory power, based on European values of free trade, democracy and individual freedoms, protects European citizens and makes it impossible for leaders like Xi, Putin and Trump to control this part of the continent politically or exploit it economically.

It was Destination Europe for President Biden this week, and his Grand Tour dominated the international news – as did our HCSS analysts and experts called upon by the media.

Key on the agenda: Biden meeting Putin, and the question was, “who will be the first to blink?” Will they keep their cool or will it degenerate into a mud-slinging contest? HCSS Russia expert Helga Salemon looked ahead at the meeting in VPRO’s Bureau Buitenland on NPO Radio 1.

In a world that is so interconnected, you sometimes have to deal with countries that have very different standards, Han ten Broeke commented on the Biden/Putin meet at WNL’s Goedemorgen Nederland. Restoring the Iran deal, climate change and the distribution of vaccines: these are all matters in which both countries have an interest.

“Whether you treat Putin kindly or call him a murderer, as Biden has done, it doesn’t matter much”, Helga Salemon continued on podcast De Dag: Putin does business from a completely different perspective.

But Putin wasn’t the only thing on Biden’s mind this week.

One thing seemed to be running through his head during the trip: what to do with China? In VPRO’s Bureau Buitenland on NPO Radio 1, the dynamic duo of Han ten Broeke, HCSS director of political affairs, and Paul Verhagen, data scientist and expert on US politics, analyzed Biden’s diplomatic roadtrip.

Will President Biden get Europe to join him in his fight against China? In their latest BNR podcast, Arend-Jan Boekestijn and Rob de Wijk talked to former NATO Secretary General Jaap de Hoop Scheffer.

“China wants to win countries over by means of economic power,” Rob de Wijk commented on RTL Nieuws. “This could ultimately lead to a split in Europe. China is an emerging world power, but it has very different ideas about democracy, the economy and human rights. The US needs allies from Europe to counter that.” Because, De Wijk continued, if China were to have too much influence, the EU would fall apart. “Their politics and economics are based on self-interest. My gain is your loss. Small countries like the Netherlands will not survive that.”

“If the raw power politics towards China continues, the Netherlands can also count on continuous friction with the Chinese”, Rob de Wijk said in an interview on NOS about the G7 summit. The Netherlands benefits enormously from a level playing field, but ultimately, we have no choice: “Welcome to a new world dominated by superpower politics.”

Biden has managed to put China at the top of the international agenda. But do the Netherlands and other EU countries want to go along on this collision course, Rob de Wijk wonders in his column for Trouw. The raw American power politics clashes with the European liberal politics of engagement.

Competition or cooperation with China on climate change: what will save the planet? To answer this question (and more), HCSS strategic analyst Joris Teer spoke to David Rennie, Beijing Bureau Chief at The Economist <- click here for the full interview!

What are the consequences of the ruling against Shell? Will the energy transition lead to even greater dependencies? Remco de Boer discusses these hot topics in his Studio Energie podcast with HCSS energy expert Jilles van den Beukel, and his recent HCSS paper on Internationale ontwikkelingen en de Nederlandse energietransitie.

The IMCCS World Climate and Security Report 2021 reveals that the increasing pace and intensity of climate hazards will strain military and security services around the world. Watch the webinar on the compound security threats posed by climate change on our website.

What exactly are the emissions of greenhouse gases by oil and gas companies? What can companies do about them? And what are the consequences of the recent court ruling against Shell? HCSS energy expert Jilles van den Beukel explains all in his article for Energeia.