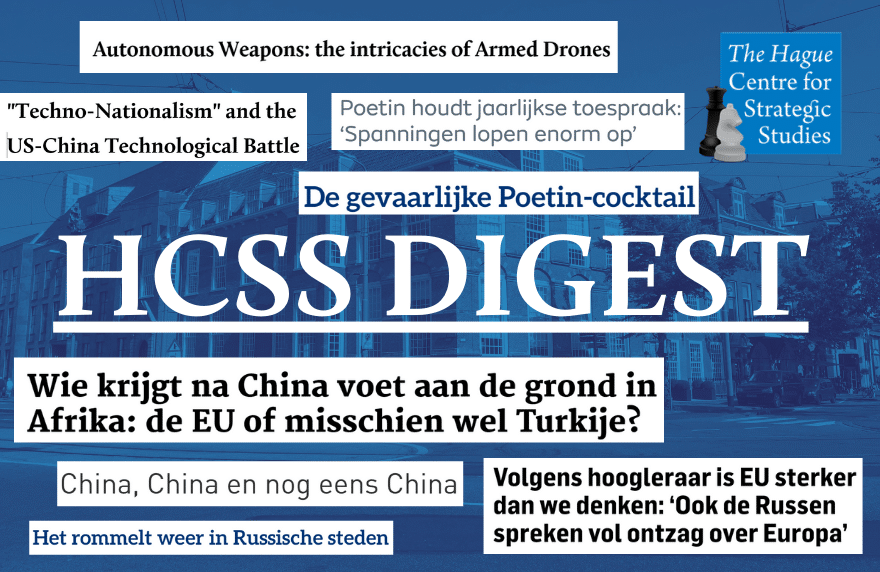 Is Africa more important than many people in Europe think? What’s going on in Putin’s mind? What are the opportunities for the Netherlands in space? And why am I seeing ads for the Sputnik vaccine on Twitter? Find out in the new HCSS Digest!

“Africa is much more important than many people in Europe think,” HCSS Senior Strategic Analyst Jack Thompson remarked in an interview with Nederlands Dagblad. “There are many reasons for the EU to pay attention to Africa. Many raw materials come from there and European countries and companies invest significantly. Meanwhile, the presence of China and Russia is growing, making it even more important for the EU to assert its presence in Africa.”

Europe is stronger than we think, Rob de Wijk said in an extensive interview in Algemeen Dagblad this week. Europe’s strength lies in “regulatory power” and economic influence. There, Europe is the number 1 internationally, and the Russians, Chinese and Americans know that too. Apart from Algemeen Dagblad, the interview was also published in BN De Stem, the Eindhovens Dagblad and Tubantia.

President Putin addressed the Russian people this week, with the whole world waiting in anticipation as international tensions mount. HCSS Director of Political Affairs Han ten Broeke commented on the situation in WNL’s Goedemorgen Nederland. “The faith of the Russian people in Putin as a strong leader is faltering,” said Ten Broeke. “A foreign adventure is often the way out. That is why we look at that speech with great anticipation.”

It’s wasn’t just about Russia though; jack of all trades Han ten Broeke also shared his opinions on the Super League, the strength of Queen Elisabeth and of course Henk Krol’s bed & breakfast real life soap.

What’s going on in Putin’s mind? How is he trying to regain his popularity? Trouble was brewing in and around Russia this week, which means HCSS Russia expert Helga Salemon was a much desired commentator for the media. It’s a dangerous ‘Putin cocktail’, she commented on Podcast De Dag, while also appearing in EenVandaag and on Radio 1’s Met Het Oog Op Morgen.

“You can show your dissatisfaction by imposing sanctions, but know that in practice it changes little for Navalry’s situation“, Rob de Wijk commented on RTL Nieuws. “Russia has never been impressed by sanctions.” According to De Wijk, the west can only make a fist if it pulls the plug from, for example, the Russian gas pipeline Nordstream 2.

Is “Space” far away? There are many opportunities for the Netherlands in the space, says HCSS Strategic Analyst Patrick Bolder, who urges the government to come up with a vision on the space domain, in newspaper Tubantia. The Netherlands has a lot of expertise, but we have to capitalize on it.

As China is rapidly emerging from the covid crisis and engaging in vaccine diplomacy, corona-skeptic populists are being exposed and Europe finally has a chance to engage in geopolitics. Read the new column by Han ten Broeke in the Militaire Courant.

In newspaper Trouw, Helga Salemon explained that the ads for the Sputnik vaccine that Twitterers all over Europe are seeing have a political purpose: to speed up EMA approval and ignite discussion on other vaccines.

“By turning off the gas valve, the last vestige of independence that the Netherlands had disappeared,” Rob de Wijk wrote this week about the geopolitical consequences of the Dutch gas policy in his column for EnergiePodium.

What is the real story behind the discovery of the Groningen gas field? In an article for Energeia, HCSS Energy Expert Jilles van den Beukel dispels the myths about the gas field and what it means for the Netherlands.

It would take a hundred years to turn early medieval Uruzgan into a beautiful province, Rob de Wijk writes in his weekly column for Trouw about the withdrawal of Western troops from Afghanistan. Internal security is now a problem for the Afghans themselves, and will only become our problem again when terrorists return to using Afghanistan as a training camp and base for attacks against the West.

PODCAST: Drone strikes may pose a fundamental challenge to the international legal standards and lawful limitations on the permissible use of force. In the JASON Institute’s latest podcast episode, HCSS Strategic Analyst Patrick Bolder discusses the intricate humanitarian issues behind drone warfare.

PODCAST: The rise of “techno nationalism” can clearly be observed in the ongoing technological race between China and the United States, Rob de Wijk explained in the podcast “In Retrospect” about the US-China tech race (also on Apple Podcasts).

PODCAST: Hear all about  China’s coal machine, the search for gas in the Southern North Sea and the real story behind the discovery of the Groningen gas field, in the latest episode of podcast Blik op Olie en Gas with HCSS Energy Expert Jilles van den Beukel.

HCSS Subject Matter Expert Heiko Borchert published a piece on a (possible) transatlantic geo-economic agenda, arguing that supply chain management should become a key transatlantic priority as supply chain interoperability is the geo-economic equivalent to defense interoperability. In addition, Borchert was recently appointed as Senior Research Fellow at the German Institute for Defence and Strategic Studies.

Should we use our agriculture as a strategic resource? Listen to the Minister of Agriculture Carola Schouten in our BNR podcast De Strateeg, online this Sunday morning, on the BNR app, website and on Spotify and Apple Podcasts.