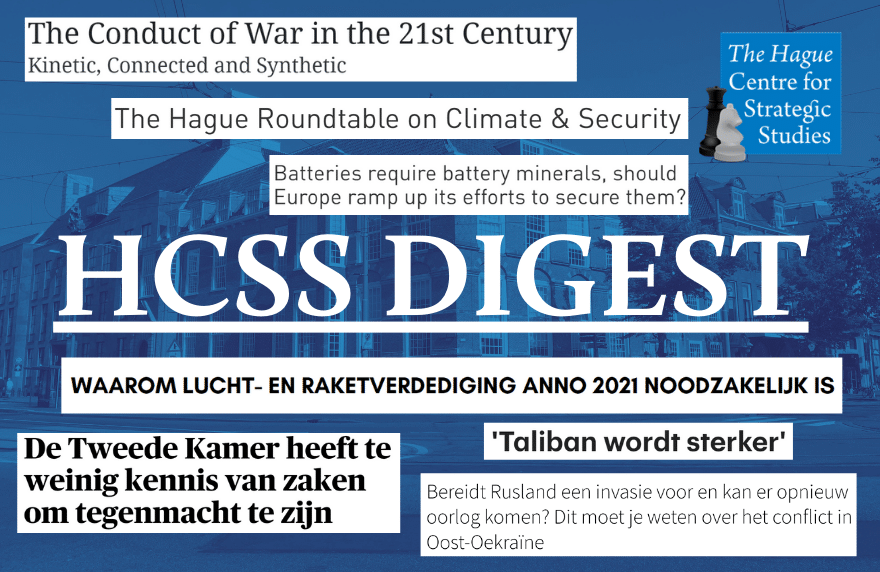 Is Russia preparing for an invasion of Eastern Ukraine? Will all efforts have been in vain, now that NATO troops are withdrawing from Afghanistan? What’s the status of our air and missile defense? And what exactly is panda diplomacy? Find out in the latest HCSS Digest.

With a little ingenuity, you can make a weapon from a drone bought on Amazon for €200. But the West has neglected its air and missile defense systems. In a new episode of our BNR podcast De Strateeg, HCSS Strategic Analysts Lotje Boswinkel and Paul van Hooft dive into the topic and discuss their upcoming report.

If the EU is to meet its goal of selling 10 million electric vehicles by 2030, it must ramp up its efforts to secure the rare earth minerals required for batteries. In our latest paper, HCSS guest author Jeff Amrish Ritoe details the geo-economics behind battery minerals.

“Panda diplomacy is a way for China to shape its relations with the Western world,” Han ten Broeke explained on Tim Hofman’s new tv show Pak De Macht, about the long arm of China.

What is happening in Eastern Ukraine? Is Russia preparing for an invasion? Could there be another war? Russia wants to send a signal, Rob de Wijk commented on RTL Nieuws. “The Russians are afraid of one thing, and that is that Ukraine will defect to the West. Putin is trying to create unrest.” Putin’s popularity has been declining. “Nothing strengthens the position of a leader as much as a threat from outside.”

Commenting on EenVandaag television, HCSS Russia expert Helga Salemon agreed: “Neither country is looking for a new war. This has to do directly with the parliamentary elections in Russia. Putin needs a success, and he seems to want to use the conflict in Ukraine for that.”

“This is very incriminating evidence”, Han ten Broeke commented on WNL’s Goedemorgen Nederland on NPO 1, about new audio tapes that have surfaced in the MH17 process, containing tapped telephone conversations from one of the main suspects in the investigation – implicating Russia’s involvement in the tragedy more and more.

“The study of that past, as shown in these pages, is the best guide against dangerous speculation and strategic confusion about the future,” writes Frank Hoffman, in the foreword to the new book edited by Tim Sweijs, Rob Johnson and Martijn Kitzen. The “Conduct of War in the 21st Century: Kinetic, Connected & Synthetic” is now available at Routledge Advances in Defence Studies, with Chapters 1, 2, 5, and 19 freely available as a downloadable Open Access PDF.

Following the Americans, NATO is withdrawing troops from Afghanistan after 20 years of war. The US says it has achieved its goals. But the country is still not safe and the Taliban have not been defeated. Is it wise to leave now? Or will all efforts have been in vain and should we have stayed longer? Spraakmakers op 1 discussed the painful issue with HCSS defense expert Peter Wijninga.

“The Taliban are only getting stronger”, Peter Wijninga also commented on RTL Nieuws about the departure of US troops from Afganistan. There is a chance that after the departure of the Americans, all achievements in the country since 2001 – such as the right to vote for women, girls going to school and the new constitution – will be brushed aside. In the end, they abandon the Afghan people again.”

The withdrawal of all NATO troops from Afghanistan, and what the Netherlands had achieved during twenty years of war, was also the topic of a discussion on late night television show Op 1 between Dutch Minister of Defense Ank Bijleveld and HCSS director of political affairs Han ten Broeke (or watch the entire episode here).

Building a transatlantic coalition for climate action on water and security challenges: the Water, Peace and Security (WPS) partnership, in collaboration with the Dutch Ministry of Foreign Affairs, organizes the 11th meeting of the series “The Hague Roundtable on Climate and Security” next week, on Earth Day 2021 – click the link for more info and registration for this online meeting.

In his latest column for newspaper Trouw, Rob de Wijk doesn’t mince words about our “cool country” and its inability to effectively handle the pandemic: the Netherlands is barely capable of crisis management, because the organization is too complex, too bureaucratic, there are too many players, and our preference for “poldering” and aversion to authority makes central control impossible.

Relations between Turkey and its NATO partners from the West are not at their best. In an op-ed for newspaper De Telegraaf, HCSS Strategic Analysts Dorith Kool and Patrick Bolder, together with Murat Dogan, argue that NATO must determine what to do with ally Turkey – based on their recent paper, Turkey’s Recalcitrance and NATO’s Nuisance, in which they explore the complexity of NATO-Turkey relationship.

The attack on an Iranian nuclear reactor was another strike in the shadow war between Iran and Israel. Are these kinds of attacks the new way of waging war? On BNR De Wereld, Bernard Hammelburg talks about it with HCSS defense expert Peter Wijninga.

Chinese President Xi, Russian President Putin and US President Trump have all tried to increase their influence on the European Union. According to Rob de Wijk in his latest bestseller, they have all failed to do so. On the contrary, thanks to these leaders, Brexit and the corona crisis, the EU has developed into a superpower that could actually turn the 21st century into the Century of Europe. Read a preview of “De Slag om Europa” now in the Clingendael Spectator.

Trailer: The Conduct of War in the 21st Century