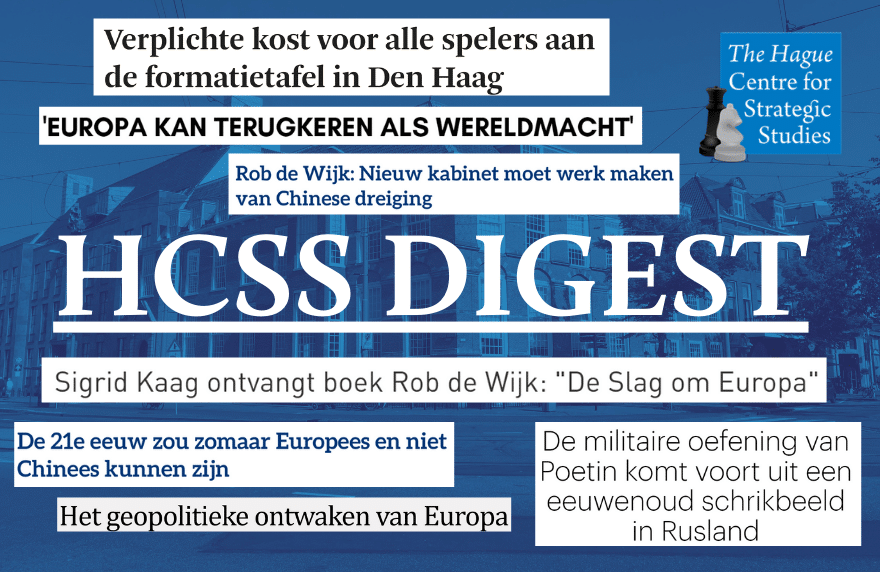 We don’t say this too often, but… Rob de Wijk is surprisingly optimistic about the future in his new book – and this week’s HCSS Digest. The Battle for Europe is on, but China and Russia may be biting off more than they can chew.

One thing is made clear in the book: Europe is under attack from all sides. From the outside by Xi Jinping, who has been trying to buy influence through his New Silk Road for years, and by Putin who is trying to disrupt NATO through covert operations. Recently, these leaders received help from the White House as well. But there are also threats from within, such as Brexit and the undermining of the rule of law in Poland and Hungary. Yet, despite all of this, Rob de Wijk draws a positive conclusion and predicts that this could well become the Century of Europe.

…it’s not just a De Wijk Digest though, we do have other HCSS news, media mentions, podcasts and research…

The delivery of humanitarian aid remains a fragile operation in armed conflict, requiring constant negotiation with armed actors. Find out more about the complex management of humanitarian spaces in Syria in this article by HCSS Strategic Analyst Dorith Kool, and the security sector’s role in stability.

In case you missed it: Rob de Wijk’s new book was released this week, and the first reviews are jubilant: in his latest book, de Wijk convincingly shows how China and Russia are trying, by any means, to undermine Europe’s strength, het Financieele Dagblad wrote, calling it “mandatory reading for all players at the formation table”.

Fresh from those formation tables: “It is now or never for Europe”, said Minister Sigrid Kaag when she was presented the first copy of the book, “to show how important Europe is and what we can really do with it, not only for ourselves but also on the world stage.”

Can orthodox thinking about war be brought up to date? Commander of the Armed Forces Rob Bauer received the first copy of the book “The Conduct of War in the 21st Century” this week, from two of its authors, Martijn Kitzen (Nederlandse Defensie Academie) and HCSS Director of Research Tim Sweijs. The book will be available available for (open access) download next week.

Europe is under attack from all sides, both from the outside as well as from the inside. Yet in his “De Slag om Europa”, de Wijk is remarkably optimistic – much to his own surprise – about the future, he  explained on Nieuwsweekendradio.

When writing his new book, Rob initially thought that things were going in the wrong direction for Europe, that the continent would not be able to withstand Chinese money and Russian machinations, he added on BNR Nieuwsradio. But during the process, he had to conclude that it wasn’t as bad as he thought: “China, Russia and Trump all get stuck on European Community policy, which is what Brussels is all about, trade policy.”

Today’s youth did not experience the historical events that made NATO necessary, but new developments in areas like cyber security and geopolitics have reinvigorated the relevance of the Alliance. Organized by Jonge Atlantici and featuring General David Petraeus, Admiral Rob Bauer and HCSS research fellow Bianca Torossian, amongst others, NATO Night 2021 explored NATO’s future prospects and how it should develop in the coming decades. Rewatch the livestream here.

“Putin is committed to disrupting decision-making in Europe, especially within NATO,” according to Rob de Wijk in conversation with Sven Kockelmann on NPO Radio 1’s 1 Op 1, where he talked about his new book, which describes in detail how Putin is trying to disrupt NATO through covert operations.

Fears of NATO expansion are still at the heart of Russia’s foreign policy. Putin knows that by consciously creating tensions, he can keep more countries from joining NATO, Rob analyzes in his weekly column for Trouw.

What is Integrated Air Missile Defense? Why is this so urgent now? What should it look like if a country is to withstand attacks? Isn’t it very old school – we  fight online with each other now, right? Do the Netherlands have air and missile defense? Find out everything you want to know this Sunday morning on our BNR podcast De Strateeg, with HCSS analysts Paul van Hooft and Lotje Boswinkel, also on Spotify and Apple Podcasts.

“Trump was bad for the world, but his presidency was a good thing for Europe.” In an extensive interview with Apache, Rob de Wijk discusses how the 21st century could well become the century of Europe.

To which extent is Covid reducing conflicts across the developing world? In Turkey, Iraq and Iran, the Global Early Warning Tool March 2021 Quarterly Update of the Water, Peace & Security (WPS) project forecasts more regions with peace than last quarter. The same goes for India, Bangladesh and South East Asia.

Many thanks to departing Assistant Analyst Joris van Schiefor his impressive work at HCSS over the past few months – we wish you all the best in your future career!