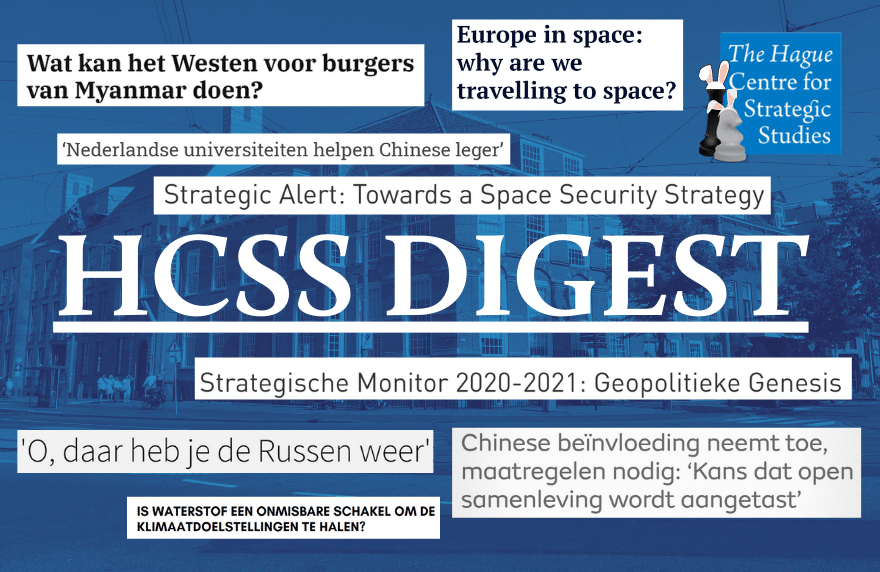 How are China and Russia trying to divide our continent? You can read all about it in Rob de Wijk’s new book next week, but for now, this latest HCSS Digest brings you up to speed with all the insights from our experts faster than you can pass through the Suez Canal.

From increased risk of collisions, to competition for extra-terrestrial resources and the militarization of space: find out more about the strategic challenges – and opportunities – of the Space Age for the Netherlands in our new Strategic Alert, Towards a Space Security Strategy, by Hugo van Manen, Tim Sweijs and Patrick Bolder, with contributions from Jens Emmers and Benedetta Girardi.

Now is the time for Europe to adopt a more assertive geopolitical stance as a nascent world power –  and the Netherlands should play an active role in this. That is the main message of Strategic Analysts Jack Thompson and Hugo van Manen in our Strategic Monitor 2020-2021 trend report, developed in cooperation with the Clingendael Institute and published last month –  the Dutch translation is available now as well.

China has been flexing its muscles more and more, but just how far does the long arm of Beijing’s reach? How is China trying to influence the West? Well, for example through covid vaccines, HCSS Director of Political Affairs Han ten Broeke explained on WNL Op Zondag.

Why doesn’t the UN intervene to stop the bloody violence in Myanmar? There is division within the security council, Rob de Wijk explains in EenVandaag: China and Russia in particular are uncooperative. And China’s influence within the UN will only increase, its vision of sovereignty will become more and more important.”

Deterrence is a concept from the Cold War era, but since 2014 there has been rekindled attention for this subject. Where does this renewed interest in deterrence come from? What does non-Western thinking about deterrence entail? And what are the consequences for Dutch security and defense policy? In episode 1 of the new podcast series Pallas Athena, Tim Sweijs and Frans Osinga discuss the topic at length.

Is hydrogen an indispensable step to achieve the climate goals? Just how far is the Netherlands in the use of hydrogen? And what’s in it for the consumer? You can hear all about it in this episode of De Strateeg, with Ad van Wijk, Professor of Future Energy Systems at the TU Delft.

Why did two Russian bombers approach Dutch airspace this week? First, to show they’re there, HCSS defense specialist Peter Wijninga explained to EenVandaag. But they also want to know how quickly we respond. In doing so, they derive information about our level of preparedness.

Chinese influence in the Netherlands is increasing. We have to be vigilant, if we do nothing, we run the risk of our open society being affected, Han ten Broeke commented on WNL Vandaag “China has increasingly become a system rival to us. While they have embraced capitalism, they don’t accept the open democracy that comes with it “

“Unfortunately, there is no vaccine against Putin’s destabilization policy…” New Spotify podcast tip: HCSS Subject Matter Expert Helga Salemon guides you through the bizarre conditions in Russia and the former Soviet countries, and their influence on us. Hear all about the Kremlin’s jubilant stories about the Sputnik vaccine in the latest episode – is it true, should we really want it and can Russia actually supply it?

Rob de Wijk is skeptical about what the West can do for Myanmar citizens, characterizing sanctions as “symbolic measures” in het Reformatorisch Dagblad. Values and power are two sides of the same coin, says De Wijk. “The West has values, but less and less power to do anything with them.” Pointing to China’s growing influence: “They won’t allow the UN Security Council to interfere in another country, because they wouldn’t accept foreign interference themselves.”

President Biden’s ambitious plans to reform the US economy, also popular among many Republicans, are often compared to Roosevelt’s “New Deal”, which fundamentally changed America in the 1930’s. A fair comparison? VPRO Bureau Buitenland discussed the initiative with our US politics expert and swivel chair champ Paul Verhagen.

Space travel is booming, and with it the militarization of space. Find out more about Europe’s role in the final frontier in this presentation by HCSS Strategic Analyst Patrick Bolder on the military space race in a webinar by the Atlantische Commissie.

How are China and Russia trying to divide our continent? And to what extent is it working? Only a few more days until the livestream of Haagsch College, where Rob de Wijk will talk about his new book The Battle for Europe in an enlightening – and surprisingly optimistic – mini lecture. Is the 21st Century really going to be the century of Europe?

Speaking of Haagsch College… we can’t wait to receive your selfies with influencer Rob de Wijk on one of the many digital advertising screens in the center of The Hague!

Rounding up, on behalf of all of us here at HCSS, we wish a you a sunny, peaceful and happy Easter Weekend!