The United States may be willing, but no longer always able: The need for transatlantic burden sharing in the Pacific Century 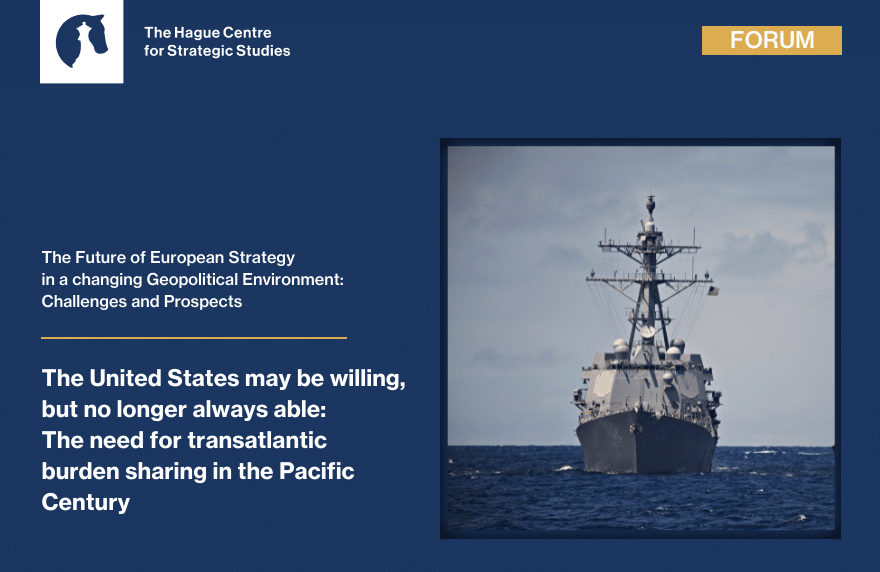 Strategic autonomy is not a luxury; it is a necessity for Europe as the United States shifts focus to the Indo-Pacific. What passes for discussions about European autonomy tend to revolve around institution-building, percentages, and capability shortfalls. Only the shock of the Trump presidency revived a debate that had been dormant for more than a decade. This rude awakening for Europeans led to some blunt language from EU policymakers: German Chancellor Angela Merkel declared that Europe could no longer fully rely on the United States and French President Emmanuel Macron called NATO “braindead.”[1]

The recent European reappraisal of autonomy was triggered less by an assessment of the shifting strategic environment than it was by the actions of one man. As memories of the Donald Trump presidency recede, the risk increases that we overlook what happened to the transatlantic relationship because of the idiosyncrasies of Trump as a president. Obviously, Trump was uniquely abrasive and dismissive towards U.S. allies: “NATO was as bad as NAFTA,” the “EU is worse than China,” the Europeans were “ripping us off.”[2]

It was difficult to assess how real the threat of U.S. abandonment was. On the one hand, U.S. deterrence and reassurance initiatives in the Baltics continued; on the other, for four years Trump continued to use inflammatory rhetoric and explored ways to implement his most extreme policy proposals, up to and during the transition to the Biden presidency.[3] It is not inconceivable that – had he won a second term – Trump would have so damaged the transatlantic relationship, and specifically NATO, that a formal U.S. departure would not have been necessary. The Trump presidency worried Europeans to the extent that they revived questions about nuclear weapons that had been dormant for half a century.[4]

In contrast, Joe Biden has promised to reinvigorate U.S. alliances, declaring the United States to be back because it simply “must lead.”[5] It is tempting to embrace a reversion back to the imagined normal. The same amnesia took place in the wake of the transatlantic bust-up over Iraq. However, Europeans should not become complacent; not only because the voices in favor of restraint or offshore balancing in U.S. grand strategy have grown in influence across the political spectrum,[6] but for more structural reasons. After all, the Biden administration immediately underlined that China is the “pacing threat” and the clear priority within U.S. grand strategy.[7]

At the core of the changes in the transatlantic relationship is the loss of the advantages the United States held in the unipolar era and, with them, the ability to maintain the role it played in Europe for decades. Those advantages may have been massive and unlikely to endure, even without the draining detour of the so-called war on terror, but U.S. competitors have also actively sought to counter the United States with technologies that undermine the very advantages the United States relied on during the previous quarter century – unimpeded power projection through its command of the global commons.[8] At the same time, during the era of unipolarity it expanded and deepened its commitments in Europe, Asia, and the Middle East. Current force planning constructs anticipate the ability to win against one near-peer power while deterring a second in another region until reinforcements can be sent. This is less ambitious – in some regards – than in previous decades.[9] Yet current U.S. capabilities still may not suffice to offer credible offers of protection to both European and Asian allies.[10]

The rise of China, and the challenge this poses to the U.S. interest in regional stability in the Western Pacific, represents a significant problem for Europe. China may not have the resources to challenge the United States globally,[11] it may not be able to compete with U.S. military-technological superiority,[12] but it can drastically raise the costs for U.S. projection in its region by targeting ships, airbases, and ports.[13] China has gained advantages locally that the United States is unlikely to overcome with investments in military-technological means alone. Given the limits on U.S. maritime capabilities – both ships and shipyards[14] – the United States will be forced to make uncomfortable decisions.[15]

Europe will not be the first priority for the United States. For Europeans, accustomed to ruling the world for centuries – even when that role had ended, Europe still served as the focus of geopolitical competition – this is a novel situation. The United States will be forced into choosing between flashpoints in various regions, and with Europe no longer the primary concern, it is less likely to be the priority. Bluntly stated, if it had to choose, the United States is more likely to act on behalf of Taiwan than of Tallinn. Moreover, as U.S. focus shifts to Asia and the Indo-Pacific, and away from the Middle East, more regional instability is likely to land on Europe’s doorstep, above and beyond what has been the case for the past two decades.

The real case for building European military capabilities that can be used autonomously from those of the United States is not based on objectionable rhetoric, a pernicious individual, or a single crisis – it is a matter of a shifting structural context for, and growing demands on, U.S. power.

What to do: greater European responsibility within the transatlantic relationship

What should Europeans do, given these new structural realities? Unsurprisingly, I argue doing more to ensure their own security, specifically in ways which strengthen the transatlantic commitment. European states should take more responsibility for their own security in a manner that ensures they have an alternative in the unlikely event that the United States is unwilling to quickly reinforce Europe, but especially for the increasingly more plausible scenarios in which the U.S. lacks the ability to do so. The latter is the real problem: without a large forward presence of conventional forces in Europe, U.S. extended deterrence guarantees rely on increasing the flexibility of the U.S. nuclear arsenal and on the relative ease of reinforcing Europe during a crisis. U.S. promises to use low-yield nuclear weapons within the European theatre do not reassure European allies. The same is true for a policy that hinges on access to the European theatre, because this would require precisely the kind of naval capabilities that are likely to be in demand in the Pacific.

Fortunately, Europeans have more manageable security problems now than during the pre-1991 period. Russia is the primary threat to Eastern European member states of NATO and the European Union and can destabilize the Middle East. European investments in conventional deterrence would buy time to deal with the Russian threat. These capabilities would include air-and missile defense, anti-submarine warfare, and mobility initiatives.[16] Much of this would make a Russian attack on command and control, transport ships, and transport nodes less effective,[17] while enhancing the ability to move forces from Western Europe. These European efforts could be bolstered by restoring and improving the readiness of heavy and light armored forces. This would require substantial investments, but would still represent relatively low-hanging fruit when compared to the cost of developing next-generation fighters, expeditionary power projection, or other high-end military capabilities associated with great powers. The latter projects should not be the key priority or even the benchmark of what strategic autonomy means; Europe is not and does not have to be a leading military power to become more autonomous. Rather, European states need to generate a minimal level of security, one that can buy them time while the United States is otherwise engaged, to ensure that deterrence remains credible. Finally, investing in capabilities focused on the European theater would sustain a European defense industry, which would in turn produce positive spillover effects in other security domains relevant to autonomy, and make it easier to justify such investments to European publics that are frequently wary of spending on defense.

Rather than undermine the transatlantic relationship, strategic autonomy, conceived as such, would strengthen it. Europeans should therefore look beyond Trump, but so should Americans. The United States is not able to fulfill its multiregional commitments to the same degree as before. It may be impolitic to state this outright, given D.C.’s belief in the indispensability of U.S. leadership; it is certainly unwise to do so for reasons of effective deterrence in the European theatre, when it is a near-certainty that the Asian theatre will be prioritized. However, it is the reality both sides of the Atlantic should come to terms with.

Offloading security costs to U.S. allies is more likely to sustain long-held U.S. interests in Europe and elsewhere than attempting to unilaterally maintain global primacy. As Barry R.  Posen, a U.S. scholar on grand strategy and prominent proponent of greater U.S. restraint, points out elsewhere in this forum,[18] the United States should re-examine its strategic interests in Europe and elsewhere. An honest assessment would highlight the benefits of redistributing some of the security burden. Instead of ignoring calls to rethink the U.S. strategy of primacy, as they have in the past,[19] Americans and Europeans should embrace such efforts. Scenarios in which it is overextended and unable to fulfill its commitments are bad for the United States, just as they are problematic for its European and Asian allies.

[1] Jon Henley, “Angela Merkel: EU cannot completely rely on US and Britain any more,” The Guardian, 28 May (2017), https://www.theguardian.com/world/2017/may/28/merkel-says-eu-cannot-completely-rely-on-us-and-britain-any-more-g7-talks; “Transcript – Emmanuel Macron in His Own Words (English),” The Economist, 7 November (2019), https://www.economist.com/europe/2019/11/07/emmanuel-macron-in-his-own-words-english.

[12] Andrea Gilli and Mauro Gilli, “Why China Has Not Caught Up Yet: Military-Technological Superiority and the Limits of Imitation, Reverse Engineering, and Cyber Espionage,” International Security, 43:3 (2019).

[15] Paul van Hooft, “All-In or All-Out: Why Insularity Pushes and Pulls American Grand Strategy to Extremes,” Security Studies, 29:4 (2020); Paul van Hooft, “Don’t Knock Yourself Out: How America Can Turn the Tables on China by Giving up the Fight for Command of the Seas,” War on the Rocks, Commentary (23 February 2021), https://warontherocks.com/2021/02/dont-knock-yourself-out-how-america-can-turn-the-tables-on-china-by-giving-up-the-fight-for-command-of-the-seas/.

European trade strategy: Striking a balance between liberalism and national...
Scroll to top