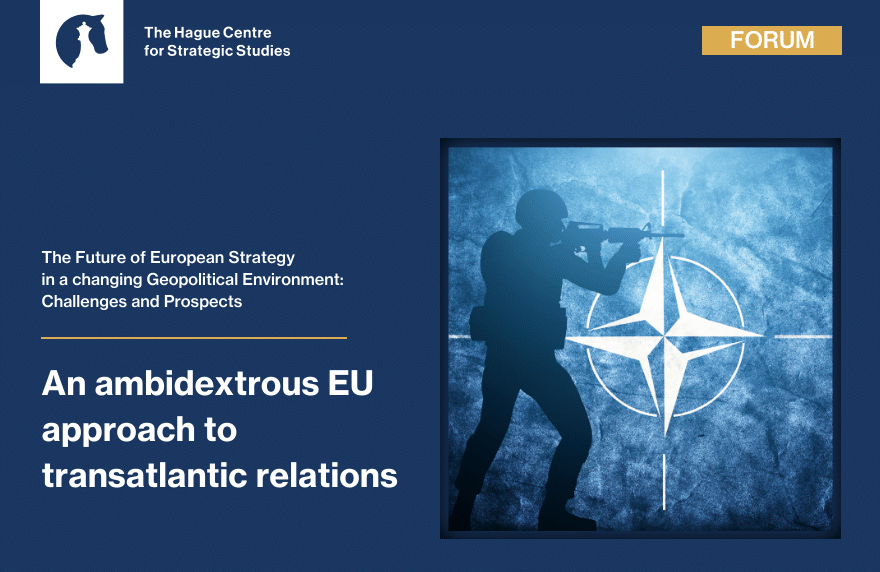 European debates about the future of US foreign policy tend to anticipate two interrelated types of behavior: that the US will become more nationalistic and will implement some degree of retrenchment – what US scholar Barry R. Posen calls “restraint.” The prospect that Europe will have to provide more for its own security as a consequence of changing US behavior has been a key factor in intensifying European discussions about strategic autonomy.[1]

This expectation about US foreign policy is, to an extent, accurate. US behavior abroad will, partly as a result of domestic economic and political challenges, be more nationalistic. Furthermore, as Washington focuses on competition with China, and to a lesser extent Russia, it will expect allies in Europe and Asia to assume more responsibility for their own security. The US withdrawal from Afghanistan in August 2021 is the latest data point in another trend: reduced US willingness to sustain long-term military interventions and troop deployments. All of this means that US foreign policy and its role in the transatlantic relationship will be less consistent than in the past.

At the same time, even as it retrenches and pivots to Asia, the US will remain the most important security actor in Europe for the foreseeable future. And the US will remain a crucial facilitator for international cooperation and trade. It will continue what some in the academic world, like G. John Ikenberry, call the US’ role as “owner and operator” of the liberal international system. Or, more precisely, it will remain a central player in those elements of the liberal international system that persist in an era of relative US decline and growing influence for illiberal powers such as China.[2]

An ambidextrous strategy: the ability to act with and apart from the US

This inconsistency in US foreign policy will be an important consideration for European strategy in the coming years. Europeans need to maintain a close partnership with the United States, but they also need to protect themselves when US policies run counter to their interests and values. In other words, when it comes to the transatlantic relationship, Europe will need to be ambidextrous: it will need to be able to pursue two different types of strategies vis-à-vis the United States and external challenges, depending on how the US operates in domains such as cyber, trade, or defense.

This means that European efforts to develop more independent and effective capabilities in security and foreign policy – strategic autonomy – will need to strike a careful balance between the two prongs of its ambidextrous strategy. On one hand, Europeans should remain prepared to cooperate with the United States. Partly, this will be a matter of need. Europe lacks the ability to fully provide for its own security, though it has sufficient economic resources and should plan to do so in the long run.[3] But working with the US is also in Europe’s interest. Even as Donald Trump’s presidency accelerated certain long-term trends in US policy – placing more importance on the Indo-Pacific and less on Europe – the United States remains Europe’s global power partner of choice. And, in spite of the unilateralism that characterized Trump’s tenure, the US remains the top funder for many vital international institutions and initiatives.[4] It is also the only other global power that has an interest in defending democratic norms and values. Finally, Europe and the United States have many strategic interests in common, including deterring Russia in Eastern Europe and maintaining an open and free multilateral maritime order in the Indo-Pacific.

On the other hand, Europe will not be able to fully depend on the US, because Washington will oscillate between internationalist-multilateralist and nationalist-unilateralistphases. Domestic support for protectionism, unilateralism, and nativism, especially among Republican voters, is stronger than at any point since the 1930s and will remain so for the foreseeable future.[5] Hence, there will be times when US foreign policy runs counter to EU interests and values.

In addition, even when the US is predisposed to an internationalist-multilateralist approach, China is likely to be a crucial issue on which US and EU agendas differ. Though both sides are increasingly inclined to view China as a competitor and are exploring potential avenues for cooperation in the Indo-Pacific, Europe will probably pursue a less confrontational relationship with Beijing. Europe will need to balance pursuing its economic and political interests vis-à-vis China, on one hand, and partnering with the US to curb Beijing’s problematic behavior, on the other.[6]

Guiding principles for the future of transatlantic relations

Even as it seeks to maintain close and constructive ties, Europe should stop allowing Washington to dictate the terms of the relationship. In the last few years, European policymakers have begun to show signs of more self-assurance when dealing with the United States; this needs to be sustained. In addition, Europe should focus on developing capabilities that, in the long run, will allow it to both act independently, when necessary, and be a more capable partner for Washington, when possible. A key advantage of developing more proactive and capable foreign and security policies is that this will make it easier to partner effectively with the US in maintaining those components of the liberal international system that are most important to Europe – and to fight for them during the US’ nationalist-unilateralist phases. Finally, policymakers at the national and EU level should prioritize fostering greater inter-EU cohesion – a difficult and long-term undertaking, to be sure. This will make it easier to resist tactics designed to divide European states that US officials will sometimes be tempted to employ. Enhanced unity will also come in handy when dealing with other major powers, such as China and Russia.

One way to boost Europe’s resilience would be to cooperate with the United States on trade and economic policy. Europe should seek a compromise with Washington on reforming the World Trade Organization, specifically, and more broadly in promoting an international trading system that is conducive to liberal democratic values.[7] One goal of such an effort should be to discourage the growing trend toward what the Information Technology and Innovation Foundation calls “innovation mercantilism.” Innovation mercantilism is a trade strategy employed by (often illiberal) states designed to protect and promote domestic firms focusing on key emerging technologies, and to discriminate against those of competitors.[8]

When it comes to defense, Europe should prioritize developing the ability to deter Russia and to defend itself in the event of hostilities. The US can no longer simultaneously play the leading role in providing security for Europe and, at the same time, effectively compete in East Asia. Hence, Europe should invest in conventional precision strike capabilities and integrated air and missile defense systems in order to develop fully formed anti-access/area-denial (A2/AD) capabilities.[9]

Finally, Europe and the United States share an interest in boosting their resilience to gray zone operations and should act in concert to address common areas of weakness. This would include taking steps to prevent unfriendly countries from exploiting domestic problems, such as anti-globalization sentiment and political radicalization. One step European states could take on this front would be to augment funding for anti-disinformation – though such initiatives are at best a partial solution.[10]

Hence, boosting European resilience will also entail deterring hostile countries. US and especially EU policymakers will need to do more than implement targeted sanctions, as the EU did in 2020 against state-backed hackers.[11] There is reason to doubt the deterrence value of these sanctions, at least in their current incarnation, which often do not affect the officials ultimately responsible. New measures against some of the worst offenders – China, North Korea, and Russia – could include broader sanctions or exclusion from international meetings.[12] This is another area in which coordinated responses, involving both the US and EU, would serve the interests of both sides.

[3] There is an ongoing debate about Europe’s ability to defend itself. I tend to agree with the argument that Europe’s shortcomings are primarily a matter of political will and not a lack of resources. See for example Posen, “Europe can Defend Itself”.

[4] Two examples are: UN peacekeeping and the WHO, see United Nations, “How We Are Funded” (2021), https://peacekeeping.un.org/en/how-we-are-funded; World Health Organization, “United States of America: Partner in Global Health” (2021), https://www.who.int/about/funding/contributors/usa.

The United States may be willing, but no longer always able: The need for transatlantic...
Scroll to top