European trade strategy: Striking a balance between liberalism and nationalism 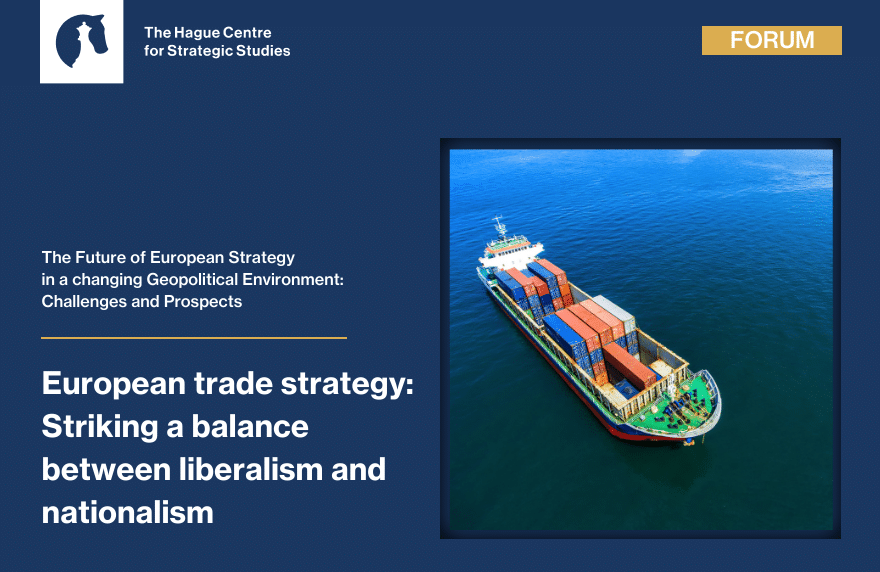 Most observers agree that the US, with its historical advocacy of free trade, is in relative decline, while China, with its mercantilist economic model, is on the rise. Some in Europe view China’s trade practices as unfair. Meanwhile, the US embraced a degree of economic nationalism under President Donald Trump that was unprecedented since the end of World War II. Whilst the Biden administration operates more through the means of the multilateral trade system, Biden also prioritises protecting the US economy from the negative effects of international free trade.

Overall, this has strengthened economic nationalist forces within the EU, even as economic nationalism manifests in different European states to different degrees. Key voices in the Netherlands, for example, are concerned that economic nationalism in Europe will harm the advantages the country reaps from its position as a trade powerhouse. In contrast, France and Germany are more inclined to take stronger state measures to stand up against the intensifying economic competition with the US and China.[1]

The empowerment of economic nationalists inclines governments to pursue more protectionist policies, even as economic nationalists’ view of what constitutes their state’s security interest differs from that of EU policy makers. Germany’s National Industrial Strategy 2030 advocates state support for important EU sectors and keeping value chains within the EU.[2] And the European Commission has been influenced by the economic nationalist turn. For instance, in its Strategic Plan 2020-2024, it advocates a trade policy that “helps the Union to protect the EU market from unfair practices and to promote EU values and standards.”[3] China’s rise, along with increasing US protectionism and its decline as the leading advocate of free trade, have played a major role in the growing acceptance within the EU of a less liberal trade system.

Against this backdrop, the challenge facing EU foreign trade strategy is clear: how can the EU preserve a version of the liberal order, which remains in its overall interest, while also integrating the concerns of economic nationalists, some of which have merit and some of which are necessary to address for domestic political reasons?

Incrementally adjusting the processes of the rules-based trade system should allow Europeans to protect key material trade sectors. This would help EU policy makers to limit the negative consequences of free trade, like the disappearance of manufacturing jobs, and thus to prevent further disintegration of the Union in the future.

On the one hand, the threat posed by the nature of illiberal states’ economic systems and trade practices necessitates some protectionism in EU trade policy. A prominent example of the challenges facing Europe is China’s use of subsidies to support domestic industries. The US, too, is pursuing increasingly nationalist economic and trade policies, to the detriment of the open international trade system. The Trump administration prioritised the protection of US jobs but so does the Biden administration, even as the latter seeks to work within the rules of the liberal international trade system.[4] Europeans should be ready to protect crucial domains of trade policy including jobs, critical infrastructure, and emerging technologies like 5G.

EU foreign policy makers should not respond to the structural impetus toward a less liberal international order by ignoring economic nationalism: ignoring it would be undemocratic and would likely backfire. Economic nationalists’ concerns include sharing sensitive technology; job losses and income distribution within their respective states; and amassing trade deficits that could leave them at a disadvantage vis-a-vis economic rivals. The gradual acceptance of more protectionist views in academia and think tanks, especially since Brexit and the Trump Presidency, increases the credibility of arguments for economic nationalism. It is not a coincidence that we are increasingly seeing elements of economic nationalism in Europe’s external trade policy.

At the same time, Europe should resist the urge to fully embrace economic nationalism. Specifically, too much economic nationalism would deprive Europeans of the benefits of obvious comparative advantages. For example, not all manufacturing, like electronics, should be moved back to Europe when such products can be produced more efficiently elsewhere. After all, EU consumers are unlikely to be willing to pay the (possibly much) higher prices that would accompany Europe’s higher wages in the manufacturing sector. Furthermore, if Europe were to go too far down the road of economic nationalism, it would undermine the EU’s status as a leading advocate of the liberal trade order. “[T]he problem is,” a Peterson Institute for International Economics report states, “that in their eagerness to push back against economic nationalism in China and the United States, EU politicians have begun to advance their own brand of economic nationalism.”[5]

Instead, EU trade policy should mix a limited embrace of economic nationalism, where necessary, with incremental revisions to the existing trading order to defend Europe’s interests: the best way to safeguard European jobs and industries is through a revised and reinvigorated international rules-based trade system.

Though important, these process issues are valuable only to the extent they allow Europeans to protect key material trade issues such as goods and services that immediately affect industries’ competitiveness and employment. For example, imports of agricultural produce have long been a contentious issue for the EU. This was demonstrated by the EU-US trade dispute over beef, which the WTO adjudicated, and during the (failed) EU-US negotiations for a Transatlantic Trade and Investment Partnership. Imports of steel from non-EU member states have long plagued the steel industry in European states like Germany and Belgium. And the use of subsidies in the civil aircraft industry has challenged EU-US trade collaboration for years.

To address these trade issues, the EU would benefit from renewing collaboration with the US. US support for the liberal international order is less strong than it was during and immediately after the end of the Cold War. And the US is different from what the EU wants it to be. The European Commission has proposed a plan to foster renewed EU-US trade cooperation under the Biden administration. This EU plan should be taken further, and President Biden’s meeting with European Council President Charles Michel and European Commission President Ursula von der Leyen in June 2021 was a step in the right direction. Whilst trade in technology is not the only issue driving economic nationalist forces, the EU and the US would benefit from collaboration to set and modernise standards for trade and the use of emerging technologies like 5G[6] and for investment in European and American companies.

Ultimately, a trade policy that safeguards European interests, jobs, and industries should be central to European grand strategy. And yet, the EU will be unable to protect its interests without a revised rules-based trade system that will allow the EU to benefit from its comparative advantages and to strengthen the EU’s internal market.

The US may be willing, but no longer always able: The need for transatlantic...