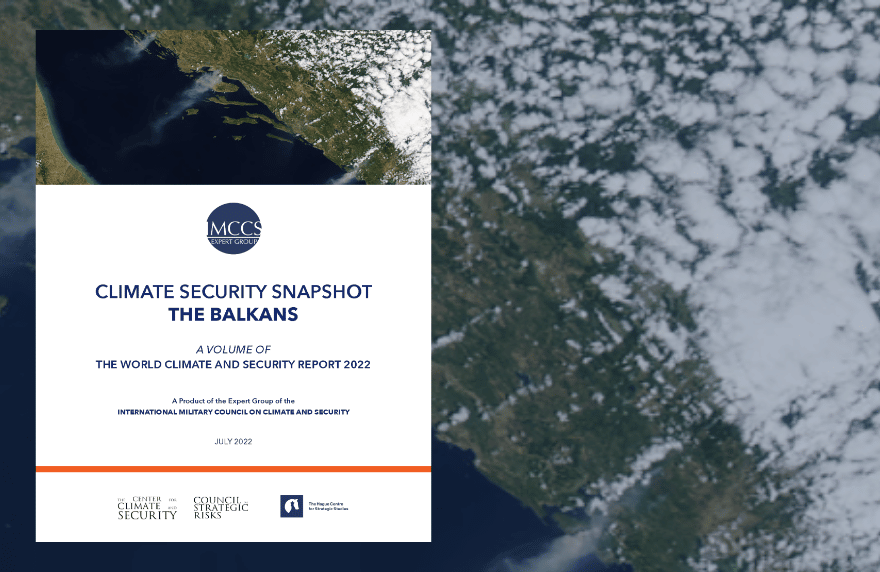 The report warns that the Balkans face serious climate security risks. Intensifying climate change impacts such as drought, heatwaves (as witnessed this summer), and tropical storms may heighten existing post-conflict tensions, threaten Europe’s broader climate goals, and increase the region’s susceptibility to influence from the Russian and Chinese governments. Additionally, climate-induced migration flows from the Middle East and Africa through the region may be exploited by far right extremists. The ongoing conflict in neighboring Ukraine only further heightens these concerns.

According to the CSRI, when compared to other regions of Europe, the Balkans face some of the most severe climate risks. Globally, climate risks in the Balkans fall slightly below average, and its resilience falls almost exactly in the middle of the global standard (though it is a standard which is dropping due to accelerating climate change). All nations in the region except Albania at least slightly outperform in resilience when compared to risk. However, those relative measures do not minimize the region’s significant vulnerability to increasing climate disasters, especially when compared to other parts of Europe, not least given a recent history of ethnic and sectarian conflict, which studies have shown increases the likelihood of climate-driven conflict.

Additionally, the report asserts that engaged climate security action—at a scale commensurate to the rapidly-increasing risks—can offer positive opportunities for post-conflict peacebuilding and cooperation in the Balkans, and can build a strong framework of human security for the region. Such efforts will be critical to continuing to mitigate and adapt to climate change and build peace, security, and climate resilience.

Iraqi Marshland Women: The True Guardians of the Marshes