Preventing conflict in the Indo-Pacific: Opportunities for cooperation between Japan and Europe 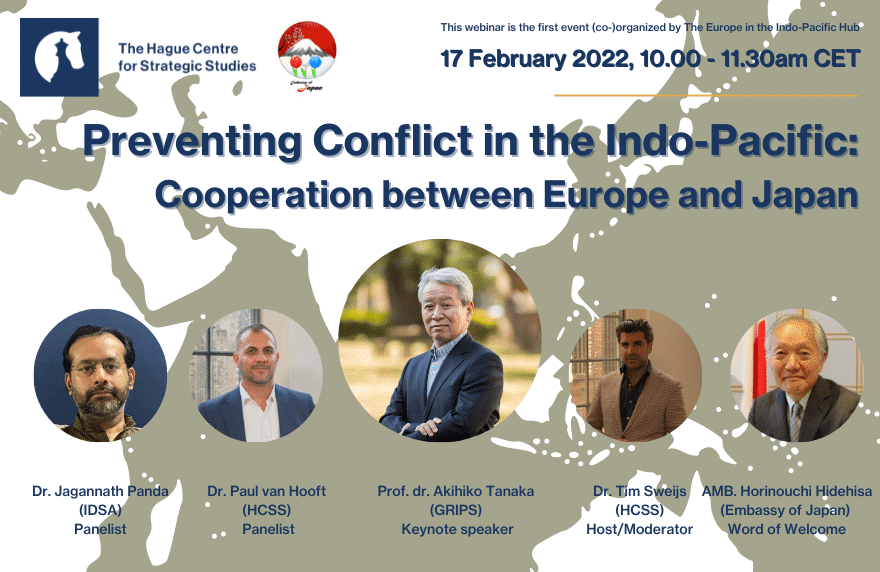 In collaboration with the Embassy of Japan in the Netherlands, the Hague Centre for Strategic Studies (HCSS) cordially invites you to a webinar on preventing conflict in the Indo-Pacific. In the upcoming decades, the Indo-Pacific region will gain importance as the economic, demographic and perhaps also the military center of gravity in the world. Great power competition, including the risk of an armed conflict, between a rising China and an established America will first and foremost play out here.

Beijing and Washington have made their first moves. China is rapidly modernizing and expanding its navy in order to better protect the waterways on which it depends for trade and resources like oil. Meanwhile the United States has initiated new coalitions such as the QUAD with Japan, an economic powerhouse by itself, India, and Australia and more recently AUKUS with Australia and the United Kingdom. The Netherlands also has skin in the game. In 2021 the Dutch navy contributed an air defense frigate, the Ms. Evertsen, to a British carrier strike group that sailed through the South China Sea and then engaged in military drills with two American carrier strike groups and the Japanese navy around Okinawa.

The following speakers will answer these questions:

Keynote speech: “The Rise of the Indo-Pacific; Opportunities for cooperation between Europe and Japan”

This webinar is the first in a series of public dialogues organized by the HCSS “Europe in the Indo-Pacific: Guarding the Maritime Commons Hub”