The Ukraine War: What It Means to Indo-Pacific Security 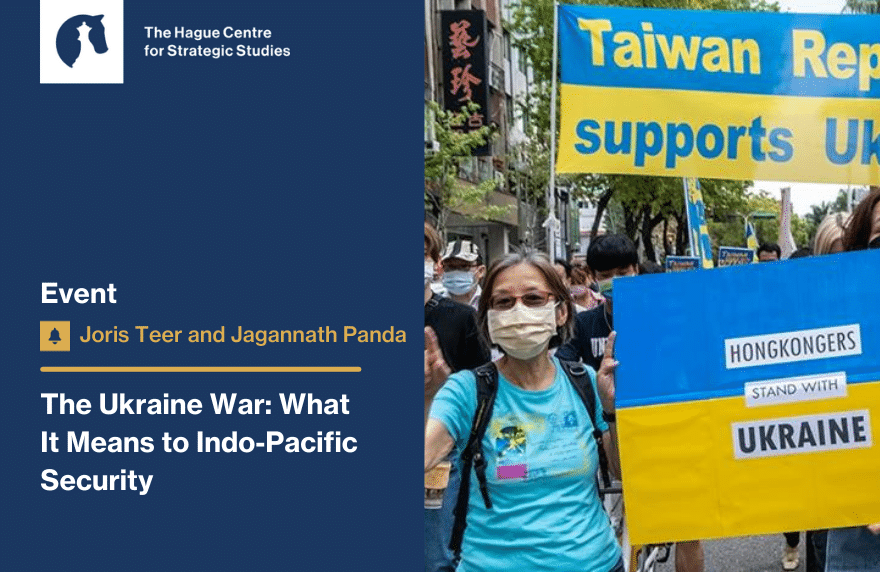 With this objective in mind, YCAPS has invited Dr. I-Chung Lai, HCSS Strategic Analyst Mr. Joris Teer, Dr Swasti Rao and Dr. Stephen Nagy to participate in a panel discussion moderated by HCSS Senior Fellow,  Dr. Jagannath Panda. The guests will introduce themselves and present their views in 8 minutes, then engage in dialogue and Q&A moderated by the hosts. The event (1 hour & 30 mnts.) will end after 90 minutes has passed. The exact time will be determined by the moderator based on audience engagement.

Dr. I-Chung Lai is the President of the Prospect Foundation. Dr. Lai served as Director General for Department of International Affairs (2007-2008) and Director General for Department of China Affairs (2006-2008) in the Democratic Progressive Party (DPP). Prior to that, he was Special Assistant for Policy to Taiwan Representative to Japan (2000-2003), Executive Director for DPP Mission in the United States (1999-2000), and Vice President of the Taiwan Thinktank (2013-2016). He received his Ph.D. degree from Virginia Polytechnic Institute and State University (Virginia Tech) and was Visiting Researcher at Cornell University.

Mr. Joris Teer is a Strategic Analyst at The Hague Centre for Strategic Studies. He is particularly interested in (maritime) defense issues, the geopolitics of the energy transition and 21st century critical infrastructure. His research of Chinese foreign policy focuses on Europe-China relations, China’s relations with the Middle East, China’s military rise and the future of the Indo-Pacific region. Teer has contributed to debate in the Dutch House of Representatives on the risks of knowledge and technology transfer to China in the defence realm. He speaks regularly on international issues on national radio and has published in both national Dutch newspapers (e.g., NRC, Volkskrant) and in English-language publications (e.g., The Diplomat). He is also a member of the Peace and Security Committee (CVV) of the Advisory Council on International Affairs (AIV). The AIV is an independent body which advises the Dutch government and parliament on foreign policy. The Peace and Security Committee focuses on current international security issues, the armed forces, transatlantic relations and European security policy. Teer holds a Dual M.Sc. Degree in International Affairs focusing on China’s politics and foreign policy at Peking University and on the international relations of the Middle East, crisis-decision making and political Islam at the London School of Economics.

Dr. Swasti Rao is Associate Fellow at the Europe and Eurasia Center, Manohar Parrikar Institute for Defence Studies and Analyses, New Delhi. She has a Masters in Politics (spl’n. IR) and an M.Phil in East Asian Studies from Jawaharlal Nehru University, New Delhi. She has completed her PhD in Advanced International Politics from Tsukuba University, Japan. She is a recipient of Japanese Education Ministry Fellowship (MEXT) in 2011 and also a recipient of the ‘Okita Memorial Scholarship’ in 2010 from ICCR. She holds an adjunct position at the Tokai University, Japan in the capacity of a foreign collaborator for the Japan Society for Promotion of Science (JSPS) funded research project on “Civil Society and Urban Governance in Asia, 2020-2025”. She has also been Research Associate at the Graduate School of Humanities and Politics at the University of Tsukuba, Japan from 2011-2016. She has been a Principal Investigator in Japan Society for Promotion of Science (JSPS) funded project,” A Comparative and Empirical Study of the Structural Changes in Politics” from 2011-2014. Before joining MP-IDSA, she was Assistant Professor in the Department of Strategic and Security Studies, AMU where she taught courses on European Security, Rise of China and implications for World Order, Research Methodology and UN Peacekeeping.

Dr. Stephen Nagy is a senior associate professor at the International Christian University in Tokyo, a fellow at the Canadian Global Affairs Institute (CGAI) and a visiting fellow with the Japan Institute for International Affairs (JIIA). His recent funded research projects are “Sino-Japanese Relations in the Wake of the 2012 Territorial Disputes: Investigating changes in Japanese Business’ trade and investment strategy in China”, and “Perceptions and drivers of Chinese view on Japanese and US Foreign Policy in the Region”. He is currently working on middle power approaches to great power competition in the Indo-Pacific. His latest publications include: 2021 Nagy, S.R. 2021. “Indo-Pacific Resilience, Prosperity and Stability: Canada’s Capabilities-led Approach to Strategic Free and Open Indo-Pacific Engagement,” in Canadian and Japanese FOIP Visions. Policy Perspectives, Canadian Global Affairs Institute. March 3rd, 2021. ISBN: 978-3-030-67770-1; Nagy, S. R. 2021. “Sino-Japanese Reactive Diplomacy as seen through the Interplay of the Belt and Road Initiative (BRI) and the Free and Open Indo-Pacific Vision (FOIP).” China Report: 1–15.; Nagy, S. R. 2020. “Quad-Plus? Carving out Canada’s Middle Power Role.” Journal of Indo-Pacific Affairs. Special Issue. Quad Plus: Form versus Substance, vol. 3, no. 5: 179–195.

Dr. Jagannath Panda is the Head of Stockholm Centre for South Asian and Indo-Pacific Affairs at the Institute for Security and Development Policy (ISDP), Sweden. He is also the Director for Europe-Asia Research Cooperation for the YCAPS. Additionally, Dr. Panda is a Senior Fellow at The Hague Centre for Strategic Studies (HCSS), The Netherlands; an International Research Fellow at the Cannon Institute for Global Studies and a Senior Fellow at the East Asian Security at the Bond University, Australia. Dr. Panda is the Series Editor for Routledge Studies on Think Asia, and most recently, he has published a study on AUKUS and Quad Plus which has been widely appreciated. Dr. Panda is a recipient of the V. K. Krishna Menon Memorial Gold Medal (2000) from the Indian Society of International Law & Diplomacy in New Delhi. Dr. Panda is the author of the book India-China Relations: Politics of Resources, Identity and Authority in a Multipolar World Order (Routledge: 2017). He is also the author of the book China’s Path to Power: Party, Military and the Politics of State Transition (Pentagon Press: 2010). Dr. Panda has also edited a number of books to his credit. Most recently, he has published an edited volume Quad Plus and Indo-Pacific: The Changing Profile of International Relations (Routledge: 2021); Scaling India-Japan Cooperation in Indo-Pacific and Beyond 2025: Connectivity, Corridors and Contours (KW Publishing Ltd. 2019), and The Korean Peninsula and Indo-Pacific Power Politics: Status Security at Stake (Routledge, 2020).