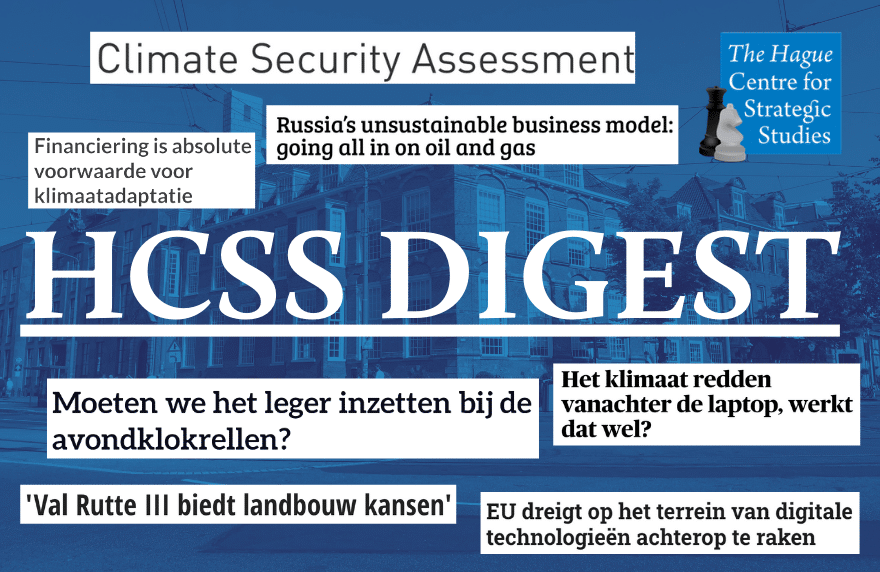 What is the security impact of climate change? Can we save the climate from behind a laptop? What does Russia’s dependence on revenues from oil and gas mean for its economic prospects? And will tanks be rolling down Dutch streets? Find out in the new HCSS Digest!

Riots broke out in several Dutch cities this week after the Netherlands introduced a night-time curfew. Some Dutch politicians called for the army to step in. Should tanks be rolling down the Sales Gutter (that’s the Rotterdam Koopgoot shopping street according to Google Translate…) in an effort to control the rioters? HCSS defense specialist Peter Wijninga thinks that’s a bad idea, he commented on RTL Nieuws program EditieNL: bringing in the army will only escalate the situation, while now is the time to de-escalate.

Wijninga was subsequently interviewed for EenVandaag, where he once again stressed bringing in the army to do a police task was unwise, despite what some mayors alluded to. “We have to use our common sense right now,” he added. Listen to the entire interview here.

What does effective deterrence look like in the 21st Century? In their new book, Deterrence in the 21st Century: Insights from Theory and Practice, authors Frans Osinga and Tim Sweijs bring together insights from renowned experts from three continents – not just Europe and the US, but also from countries such as China, Iran, Israel and Russia. Minister of Defense Ank Bijleveld received the first copy this week.

A failing vaccination strategy, high number of infections and social unrest. The Netherlands as a guiding country? Abroad they are looking at us with increasing amazement – and amusement, Rob de Wijk notes in his column for Trouw. Because the Dutch “poldering” only works on calm seas. In times of crisis a central, guiding role is required.

The Netherlands organized the first online climate event this week, the Climate Adaptation Summit. The symbolism of this large-scale online meeting is cause for hope, says HCSS expert Laura Birkman to ANP. But financing is an absolute precondition for climate adaptation, she added – which was also reported by newspaper Trouw.

“The lack of investment in innovation is threatening Europe”, ANP quoted Deputy Director Michel Rademaker, reporting on the TNO/HCSS Whitepaper“Strategische Autonomie op Cybersecurity”: the EU is at risk of falling behind in the field of digital technologies. His warning was also picked up by security news site Beveiligingswereld.

Climate, water, peace & security are interlinked issues. At a side event of the Climate Adaptation Summit this week, Water, Peace, Security and Adaptation, the Water, Peace & Security (WPS) partnership presented its latest Conflict Forecast and how to best adapt to climate change while fostering sustainable water management.

The Netherlands has no eye for the strategic opportunities of the agri-food sector, Rob de Wijk muses in his first column for Nieuwe Oogst. It seems as if we are only interested in the amount of nitrogen emissions and the quantity of animals.

Former President Trump (yes, he’s still getting the occasional headline or two) caused the norms and standards of international politics to blur and fade, Han ten Broeke commented in podcast Europa Draait Door. Biden will partially restore these old relationships, but the world will not go back to the way it was.

Russia’s dependence on revenues from oil and gas production is now higher than that of the Soviet Union in the 1980’s, but prospects for fossil fuels have deteriorated in recent years. In a new article for Raam op Rusland, Jilles van den Beukel and Lucia van Geuns assess the prospects of Russia’s economic model.

HCSS is proud to welcome a new Subject Matter Expert to our impressive roster of specialists:  Jaap van den Herik will be joining us as Strategic Advisor. His expertise is in Data Science, Artificial Intelligence and Law.

Deterrence in the 21st Century: Insights from Theory and Practice
Scroll to top