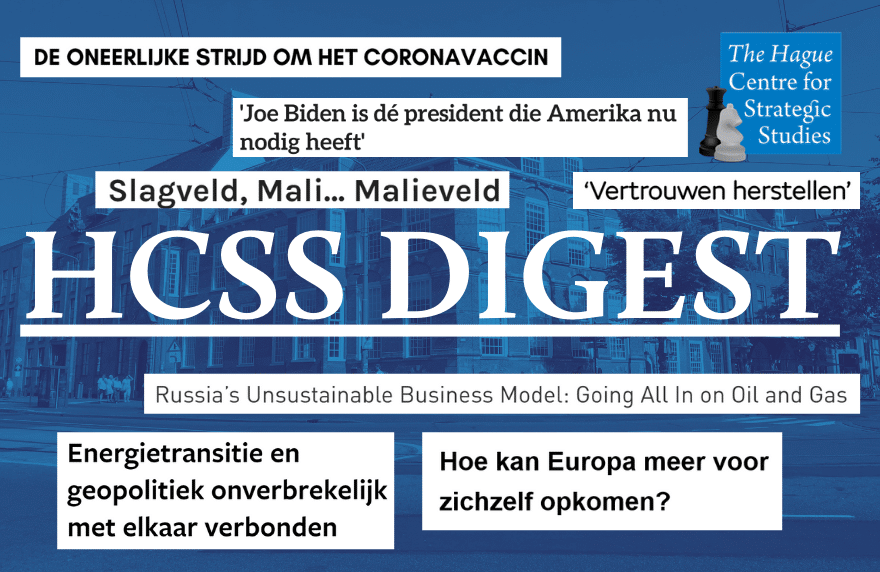 Meet the new boss. Same as the old boss? Will international relations improve under President Biden? Can Europe really stand up for itself? Make sure you won’t get fooled again and catch up with the latest HCSS Digest.

Russia’s dependence on revenues from oil and gas production is now higher than that of the Soviet Union in the 1980’s; however, the prospects for fossil fuels have deteriorated. How will the Russian oil & gas industry – and the Putin regime in general – deal with the (future) challenges of going “all in” on oil and gas? Find out in this new HCSS paper by Jilles van den Beukel and Lucia van Geuns.

For the past few years, China has further expanded its global power due to Trump’s failing foreign policy, Rob de Wijk stressed on NPO Radio 1. “It will be difficult for Biden to regain that power.”

What are the geopolitical consequences of the corona vaccins? For us, light shines at the end of the covid-tunnel, with life going back to normal in 2021 if enough people are vaccinated. But for many other countries, buying millions of vaccines to protect their population isn’t as easy. Should we as Europeans care more about that? And if so, what should we do about it? Listen to the new episode of our BNR podcast De Strateeg, with David Criekemans, associate professor of Geopolitics at the University of Antwerp, and Susan van den Hof, head of the Center for Epidemiology and Surveillance of Infectious Diseases at the RIVM.

The battlefield has always been an information environment, Han ten Broeke wrote in his column for Militaire Courant. But the rise of internet and social media are a gamechanger, causing our free West to become vulnerable to rapidly emerging public opinion… something our opponents will exploit.

Are we exchanging one dependency for another? Because even in a green world, energy and geopolitics remain inextricably linked, Rob de Wijk wonders in his column for EnergiePodium about the energy transition.

Biden has his work cut out for him to restore relations with Europe, Han ten Broeke commented on WNL Vandaag, now that Europe has become more self-aware of its own geopolitical position since the Trump era.

Like his predecessor, Biden is well aware that foreign policy must serve the middle class, which is not looking forward to useless military interventions and a power struggle with China. Unfortunately, that is not a choice, Rob de Wijk writes in his column in Trouw. Geopolitics and defense are enforced by international circumstances.

Will international relations improve under President Biden? Although Biden’s policy is more in line with Dutch interests on topics such as climate change, the genie is out of the bottle, HCSS Data Analyst Paul Verhagen commented on Spraakmakers op 1: it has become quite clear under Trump that Europe has to be able to defend its own strategic interests.

The European Union has many problems and is far from perfect. It also faces many threats from within and without. How can we deal with this as a Union? Can Europe really stand up for itself? Watch the Volt Nederland discussion with Rob de Wijk, or go to YouTube.

In the new episode of podcast Europa Draait Door, Arend Jan Boekestein and Han ten Broeke discuss the transatlantic relations under the new President. Can Biden close the gap with Europe again?

“Biden is the president America needs now. I wonder if anyone else has the authority to get things back together.” In VPRO’s Nooit Meer Slapen podcast this week, Rob de Wijk discussed the current events in the US, as well as his new book “The battle for Europe. How China and Russia are dividing our continent“.

Wondering how water relates to peace? Read this terrific interview with Assoc .Prof. Susanne Schmeier, whose work focuses on water-related conflict and instability risks, including for Water, Peace & Security (WPS), in which HCSS is a partner. According to Schmeier, space technology is crucial, as this allows us to identify hotspots of potential water-related conflicts early on and to raise political awareness with policy-makers.

This week, we’d like to wish departing Management Assistant Angelica Francisco a happy birthday, and we congratulate Daria Goriacheva from HCSS Team Ukraine, who’s celebrating her birthday this Sunday.

Free tip for the weekend: as the Netherlands is entering a curfew starting tomorrow, it’s a good thing you can also listen to all episodes of De Strateeg on Spotify and Apple Podcasts…