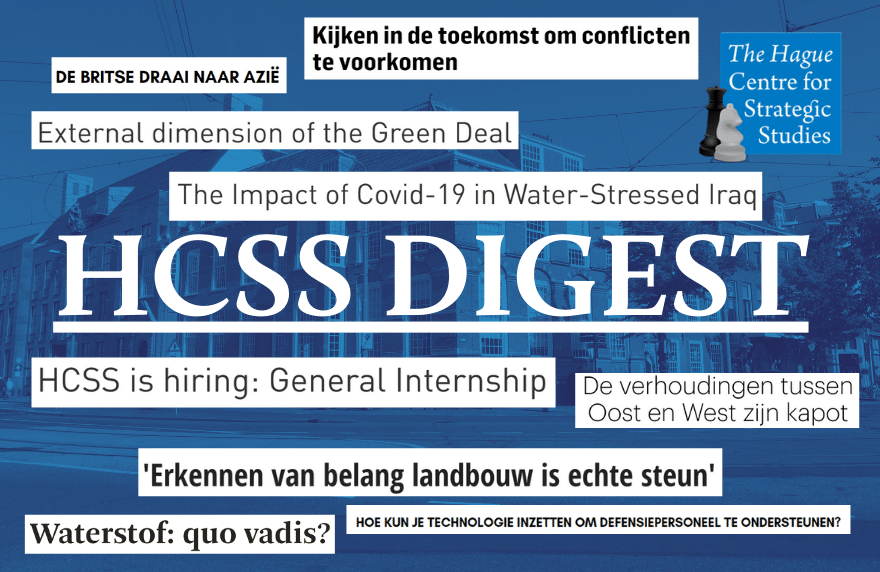 There’s no exposed confidential notes about coalition negotiations in the weekly HCSS Digest, but we do tell you all about China’s sanctions, the geopolitical consequences of the EU’s Green Deal, the pros and cons of hydrogen and more!

The HCSS Internship Program is accepting applications again! Are you interested in geopolitics, global trends, security, and geo-economics? Do you have a research aptitude and a thirst to learn new things? Then check out the General Internship and the Data Internship and come join our team!

One of the main risks for the Dutch Defense organization is a structural shortage of personnel. In this week’s episode of our podcast De Strateeg, Sanne Maas of PwC and Frank Bekkers of HCSS  identify the promising areas where technological solutions can help – based on their recent report.

What role does the UK want to play in the world, post Brexit? Listen to the new episode of Boekestijn en De Wijk on BNR, with HCSS Senior Strategic Analyst Paul van Hooft discussing China, nuclear weapons and an aircraft carrier lacking aircraft.

China imposed sanctions on 10 EU citizens, including a Dutch politician. According to Han ten Broeke, China isn’t worried about losing face internationally, he commented on WNL’s Goedemorgen Nederland. “That China no longer exists. This is a China that is assertive, almost aggressive, a China that stresses its position in the world and will not tolerate anything anymore.”

At the same time, China is increasingly in need of cooperation with Europe, Rob de Wijk commented in NOS Nieuws. “China isn’t Russia, which has received similar sanctions from the EU. Putin shrugs, even raises his middle finger. The Chinese cannot do that. EU cooperation is crucial for them, for instance in terms of access to the European market and technology.”

The European Green Deal will have fundamental geopolitical consequences. To quantify these, HCSS Deputy Director Michel Rademaker presented the “Climate Security Risk Index” at a webinar organized by the European Greens. Watch his presentation here.

In a background article about hydrogen at Energeia Nieuws, HCSS Energy Specialist Jilles van den Beukel raises three central questions: What are we going to do with hydrogen, and what not? How much blue hydrogen, and how much green? And how much local production, how much import?

This week’s Israeli elections are about one thing only, Han ten Broeke analyzed on RTL Nieuws. “It’s about Netanyahu’s future. Can he get a majority of 61 seats in parliament? If so, he will remain prime minister and probably won’t be prosecuted.”

The PVV and FvD are fiercely opposed to nitrogen reduction measures and climate goals, and profile themselves as great friends of the farmers. However, the rising costs of Brexit show that their anti-EU position is going to do more damage to the agricultural sector than any nitrogen measure, Rob de Wijk writes in his new column for Nieuwe Oogst.

On World Water Day this week, newspapers Algemeen Dagblad and BN De Stem wrote about the unique early warning tool of the Water Peace & Security (WPS) partnership, which can predict an increased risk of conflicts over water one year ahead, by using satellite data and machine learning, in order to generate timely action.

Jilles van den Beukel was also a guest in the Studio Energie podcast where he spoke about hydrogen, IEA oil report, Nordstream 2 and commodity trading.

“Welcome to the new battleground of eastern state capitalist autocracies against western liberal democracies,” Rob de Wijk writes in his weekly column for Trouw about the new harsh geopolitical reality facing Europeans. We need the Union for the raw power politics to maintain our prosperity and way of life.

Former HCSS Strategic Analyst Esther Chavannes was a guest on the Grootspraak Podcast, where she spoke to host Jort Kelder about the ethics of robotics and autonomous systems.

HCSS Research Fellow Bianca Torossian will join NATO Night 2021 on April 8th as one of the experts discussing the greatest challenges to the Alliance now and in the coming decades – register here for this Jonge Atlantici event.

And finally, with a constantly changing vaccination strategy, for all you Dutchies here’s a handy tool to find out when you’ll receive your covid vaccine in the Netherlands.