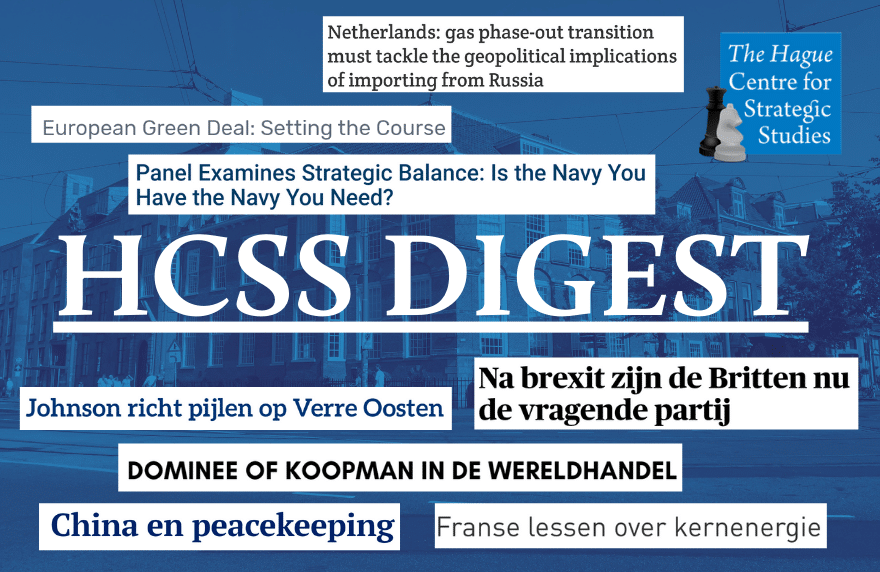 March 2021 is starting to look a lot like March 2020. But at least we got toilet paper this time…

What’s the right mix of ships to ensure both deterrence and striking capability? What motivates China to participate in peacekeeping missions in Africa? And what are the three dilemmas the Netherlands is facing as a result of the domestic gas phase-out? Find out in this week’s HCSS Digest roundup of webinars, podcasts and reports.

Missed this week’s Center for Strategic and Budgetary Assessments (CSBA) webinar on Maritime Competition and the Maritime Strategy? You can now watch the recording featuring 9 of the best scholars in the world opining on the topic – including HCSS Senior Strategic Analyst Paul van Hooft.

Would other countries join the US to defend Taiwan in the event of a Chinese invasion? What is the right mix of ships to ensure both deterrence and striking capability? For a rundown of the webinar featuring Paul van Hooft be sure to check out Sea Power Magazine: is the navy you have the navy you need?

In podcast “De Atlantische Blik”, HCSS Strategic Analyst Dorith Kool discusses what motivates China to participate in peacekeeping missions in Mali and Congo, among others. And what are the consequences for Africa and NATO? Listen to  this Atlantische Commissie podcast on Spotify or SoundCloud.

Eroding geopolitical influence at the expense of Russian gas imports, fragmentation in the EU at the expense of a common approach to energy policy, and higher greenhouse gas emissions at the expense of domestic production – the three dilemmas that the Netherlands is facing as a result of the domestic gas phase-out. Read the short summary on Energy Post by Assistant Analyst Irina Patrahau and HCSS Energy Expert Lucia van Geuns of their latest paper, “Gas Supply Security in the Netherlands: Geopolitical and Environmental Dilemmas”.

During the BNR Nieuwsradio election debate “Dominee of Koopman in de Wereldhandel”, candidate MPs from 6 Dutch political parties discussed international trade, the EU and China, on the basis of pitches from HCSS Strategic Analyst Joris Teer.

Political parties VVD and CDA say the Netherlands cannot do without nuclear energy, and Rob De Wijk agrees, he writes in his latest column for EnergiePodium. But the next government must also take a very close look at the lessons from the French when it comes to nuclear energy: public support and long-term planning are indispensable.

The European Green Deal will – if it is resolutely implemented – have fundamental geopolitical consequences. In a workshop organized by the European Greens, HCSS Deputy Director Michel Rademaker approached the topic from a higher-level perspective, and presented our newly developed “Climate Security Risk Index“.

PM Johnson wants to restore the UK to its former glory and position itself as the fourth world power. Asia should play an important role in this, but how do those countries look at the British plans? “The British could have done better as part of the European Union,” Rob de Wijk commented at VPRO’s Bureau Buitenland.

A structural shortage of personnel is one of the main risks for the Dutch Defense organization. In this week’s episode of our podcast De Strateeg, online this Sunday morning on BNR Nieuwsradio, Sanne Maas of PwC and Frank Bekkers of HCSS  identify the promising areas where technological solutions can help – based on their recent report.

“The only thing they couldn’t do by themselves as an EU member, was to negotiate trade agreements.” That the British are now trying to negotiate all kinds of treaties is definitely needed, but after Brexit they are now the requesting party, according to Rob de Wijk in his latest column in Trouw.