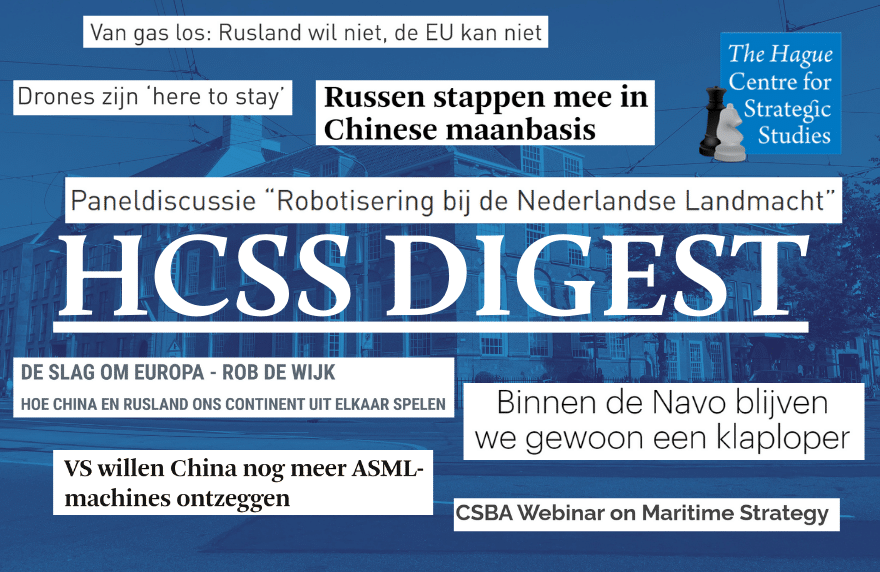 From RAS to gas: this week’s HCSS Digest takes you from robots and the battle for Europe, to maritime strategy and the race for the moon.

What do Dutch parliamentary representatives think of the use of Robotics & Autonomous Systems (RAS) by the armed forces? This week, HCSS hosted a panel discussion between MP’s Sven Koopmans (VVD) and Bram van Ojik (GroenLinks), moderated by journalist Paul van Liempt. The debate, including a screening of the new HCSS documentary “Robotisering bij de Nederlandse Landmacht” was broadcast live on our YouTube channel.

C-CLAS LGen. Martin Wijnen gave an introductory presentation before the (Covid-proof) panel, and was handed the first copy of our Capstone report “Robotic and Autonomous Systems in a Military Context” by HCSS Deputy Director Michel Rademaker.

There are many myths about drones; from the idea of “killer robots” to the idea that armies will soon be completely replaced by unmanned systems. For a more nuanced explanation of the future of drones, read Patrick Bolder’s column “Drones are here to stay”.

Europe is under attack from all sides: from the outside by Russia and China, but also by threats from within, by Brexit and the undermining of the rule of law in Poland and Hungary. Nevertheless, Rob de Wijk reaches a positive conclusion in his new book “De Slag om Europa“, which will be presented on April 7th during a special edition of Haagsch College– book your ticket now!

The energy transition causes Europe to remain dependent on Russian gas for years to come. That is why it is necessary for the Netherlands to maintain an adequate mix of long-term contracts, LNG import capacity and sufficient gas storage, say HCSS energy experts Jilles van den Beukel and Lucia van Geuns in an article for EnergiePodium.

Direct use of military force can have unintended consequences that may undermine mission objectives. By contrast, a behavior-oriented approach allows the military to influence and shape desirable behavior of actors. In a new HCSS report, Klaudia Klonowska and Frank Bekkers delineate behavior-oriented methods to improve the capacity of the armed forces to accurately interpret human behavior in a military context and efficiently anticipate conflict situations.

“The ASML machines are so advanced that they are an important asset with which Europe can put pressure on China. Europe can thus force them to adhere to other geopolitical trade agreements. The Netherlands is really too small a country on its own,” Rob de Wijk commented in het Financieele Dagblad, stating that “The Hague ultimately has no choice but to hand over control of such exports to Brussels.”

States are increasingly attacking and testing each other’s threshold for war in cyberspace, implying never-ending cyberconflict until a threshold is crossed by accident. An often drawn historic parallel is the situation in 1914, when the unknown consequences of interdependence, technologies and intent led Europe to “sleepwalk” into war, cybersecurity expert Alexander Klimburg explains in an interview in Die Presse.

How do corona and the energy transition affect the outlook for Shell and other oil and gas companies? In Technology & Science in perspective, HCSS energy experts Lucia van Geuns and Jilles van den Beukel share their vision on the future of the multinational.

Rob de Wijk is happy with the new political programs of the mainstream parties, he wrote in his weekly column for Trouw. There’s more realism, more Europe. But within NATO, the Netherlands simply remain a freeloader.

Next Tuesday, HCSS Senior Strategic Analyst Paul van Hooft will participate in the Webinar on Maritime Competition and the Maritime Strategy organized by the Center for Strategic and Budgetary Assessments.

On Friday, HCSS Deputy Director Michel Rademaker will be a key speaker at the public webinar “External dimension of the Green Deal” organized by the German Greens in the European Parliament, where he will also discuss the Climate Security Risk Index.

The current exploitation of the ISS (by the US, Russia, Europe, Japan and Canada) was thought to provide a solid basis for further international cooperation in space. However, Russia will not be joining the Artemis lunar program, and is instead hooking up with the Chinese. According to rocket man Patrick Bolder in newspaper De Standaard, Russia is reluctant to commit to the Artemis terms that stipulate what you can and cannot do on the moon. “This includes opening up and sharing scientific data and transparency about your activities,” Bolder explained. “Russia will be able to claim a larger and freer role in the Chinese lunar plans. Within Artemis it would have been smaller.”

Botched handling of the pandemic has damaged Dutch self-esteem, news site Politico quoted Rob de Wijk today. “Now it’s over with [the idea] of the Netherlands as gidsland,” De Wijk said. “Our vaccination strategy is a disaster, we are at the top of the number of infections and have social unrest … Other countries are looking at us with increasing amazement.”