Cooperation with China: No mandatory disclosure for universities 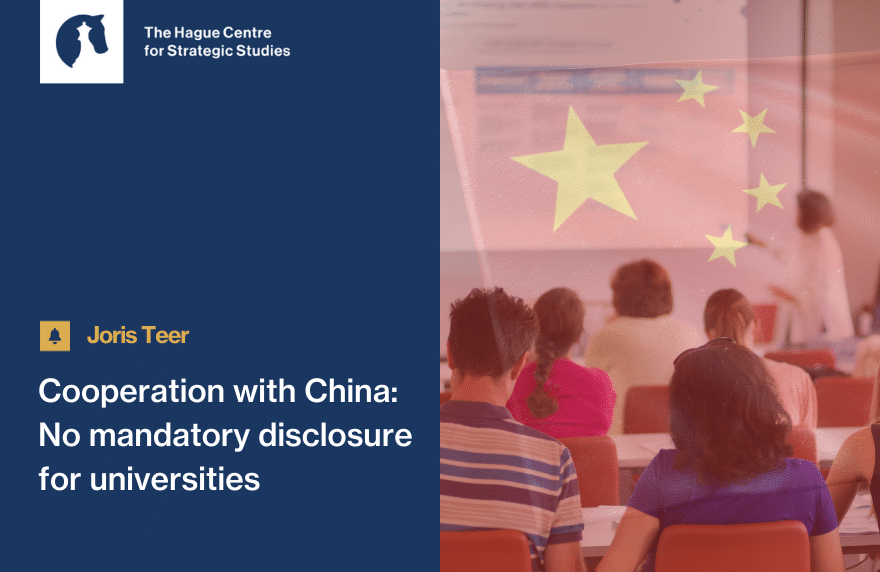 The Dutch Cabinet does not want to institute mandatory disclosure for universities and companies working with Chinese entities in risk areas. This emerged from answers to Parliamentary Questions (in Dutch) posed by House of Representatives members Sjoerd Sjoerdsma and Alexander Hammelburg (both of the D66 party) after an article appeared in the NRC newspaper.

In the article, HCSS defence expert Joris Teer (in Dutch) calls on the Dutch government to be more watchful for the undesirable transfer of knowledge. ‘China wants to become the number one military power in the world. This must not happen with the help of European knowledge and technology’ stated the defence expert. Teer believes that mandatory disclosure would help the Goverment determine if incidents are the tip of the iceberg or the whole iceberg.

In March, the Dutch Government, in collaboration with the Universities of The Netherlands umbrella organisation, introduced the Nationale Leidraad Kennisveiligheid (national guide for knowledge security). According to Teer, this does not go far enough, but the Cabinet does not agree. ‘Universities and companies have the freedom to enter into partnerships with partners inside and outside the country. For universities, this is part of their academic freedom protected under Dutch law. It is primarily up to the knowledge institution or the company themselves to weigh up the opportunities and risks of each partnership’, write Ministers Ollongren (Ministry of Defence), Hoekstra (Foreign Affairs), and Schreinemacher (Foreign Trade and Development Cooperation) in answer to the Parliamentary questions.

At the end of this year, Minister Robbert Dijkgraaf of Education, Culture and Science will meet with the Supervisory Boards of knowledge institutions to assess if the Cabinet’s current knowledge security measures suffice. (AdB)

The original Dutch version of the article can be found here.