Charting NATO’s Future in an Age of Disruption 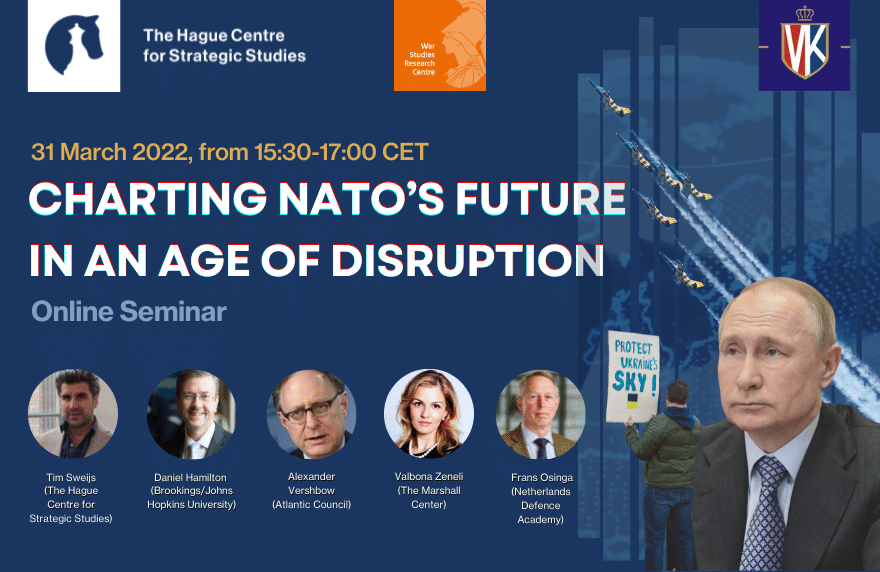 The Hague Centre for Strategic Studies (HCSS), the War Studies Research Centre (WSRC) of the Netherlands Defense Academy and the Royal Netherlands Society for War Studies (KVBK) have the pleasure to invite you to the online seminar: “Charting NATO’s Future in an Age of Disruption”, on March 31st 2022 from 15:30-17:00.

On 17 February 2022, a panel of independent experts of the NATO Task Force, including former senior U.S. and European officials and security analysts, issued a report to advance the Alliance’s strategy for the next decade, including through a new Strategic Concept, which Allied leaders intend to unveil at the June 2022 NATO Summit in Madrid.

The report argues that the NATO Alliance must urgently adjust to a more volatile “Age of Disruption” that threatens allies’ security in serious and often unpredictable ways. The report warns that this age of disruption will take a dramatic turn for the worse if NATO fails to deter Russia from further invasion of Ukraine.

During the online seminar, key members of the Task Force will discuss the war and its consequences and reflect on how NATO should adjust based on the approach of “One Plus Four”: The One is allied cohesion and more effective decision-making, in support of adaptation of NATO’s three core tasks — collective defense, crisis management, and cooperative security — and complemented by a fourth core task: building comprehensive resilience to disruptive threats to allied societies.

Registration is required through Eventbrite. The online seminar will take place on Zoom. The Zoom link will be send to the registrants 24 hours prior to the event.