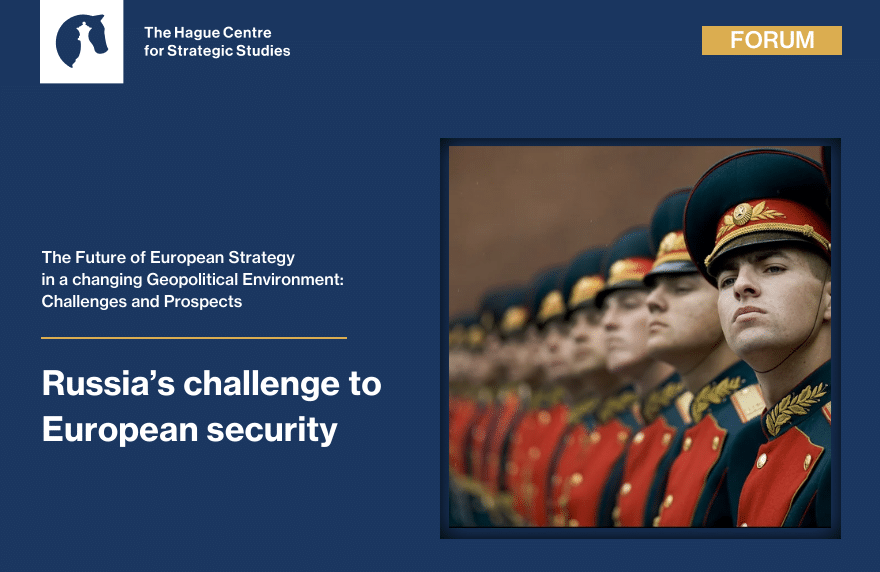 Russia remains the primary security concern for Europe and NATO, posing challenges to European security in the conventional, nuclear, and hybrid realms. The security relationship between Russia and the West deteriorated sharply in recent years following a series of disruptive events, notably Russia’s war against Georgia in 2008, its annexation of Crimea in 2014, and its subsequent support for insurgents in eastern Ukraine. In the spring of 2021, Russia raised alarms with a major force deployment along Ukraine’s eastern border. This situation raises concerns about the preservation of European security, especially in particular contingencies. An accurate understanding of Russia’s challenge to European security is a precondition for European efforts to craft an appropriate strategic response.

For the past few years, as relations with Russia grew steadily worse, Western countries pursued a dual-track approach. On the one hand, the West sought to maintain dialogue with Russia and to pursue a political solution in Ukraine through the Minsk process. On the other hand, NATO took steps to bolster its deterrent capacity, especially along its eastern flank. Through its Enhanced Forward Presence (EFP) initiative, it deployed additional, rotating forces to Poland and the Baltic countries, which from NATO’s standpoint are still in compliance with the NATO-Russia Founding Act. However, because EFP forces only establish a tripwire, concerns remain about NATO’s ability to defend the Baltic states against a potential Russian fait accompli. Some recent studies suggest that NATO would have difficulty prevailing in such a scenario.[1]

Russia’s challenge and the U.S.’ role in Europe’s defense

Russia remains a formidable military power, though its conventional forces are inferior to those of NATO. The program of military modernization that Russia initiated around 2000 continues and has produced important results. Russia has improved its conventional military capabilities and conducted large-scale military exercises in its western regions, in some cases carrying out snap exercises with little advance notice. In conducting these maneuvers, Russia often ignored its commitments under the Vienna Document to implement confidence and security-building measures. The Conventional Forces in Europe (CFE) Treaty, which was negotiated at the conclusion of the Cold War, is no longer in place to regulate conventional force deployments. Russia suspended its participation in the treaty in 2007 and withdrew altogether in March 2015, one year after the annexation of Crimea. Russia also frequently conducts provocations such as bomber and fighter patrols that make incursions into the airspace of European countries. In 2020, the United States withdrew from the Open Skies Treaty, alleging Russian violations.

The nuclear dimension of security relations between Russia and the West remains crucial. Nuclear weapons play an important role in Russian strategic thinking. They compensate for Russia’s inferiority in conventional military power in comparison to NATO. Russia’s most recent nuclear guidelines, published in 2020, state that the Russian government views nuclear weapons as exclusively a means of deterrence. The document lists several conditions under which Russia would use nuclear weapons, including confirmation of an incoming ballistic missile attack against Russia or its allies, the use of nuclear weapons or other weapons of mass destruction against Russia or its allies, an attack on sites that would threaten Russia’s ability to respond with nuclear weapons, or an attack on Russia with conventional weapons that would put the state’s existence in jeopardy.[2]

Many outside analysts perceive a lack of clarity in Russia’s nuclear doctrine, however. The most recent U.S. Nuclear Posture Review, which was released in February 2018, argued that Russia subscribes to the belief that it could use the threat of nuclear escalation or the actual first use of nuclear weapons in order to “de-escalate” a conflict on terms that it considers to be favorable.[3] In addition to this concept of “escalate to de-escalate,” other analyses posited that Russia adheres to a “theory of victory”[4] or that its actual policy is “escalate to win.”[5] According to another view, the goal of Russia’s nuclear doctrine is to maintain escalation control and dominance through all stages of a crisis.[6] Such an approach would be consistent with what has been described as Russia’s “cross-domain strategy of coercion.”[7]

Russia’s recent nuclear force modernization and deployments reflect the apparent pursuit of such capabilities. In addition to modernizing all three legs of its nuclear triad, it has developed new intercontinental-range systems such as a hypersonic glide vehicle, a nuclear-armed, nuclear-powered cruise missile, and a nuclear-armed, nuclear-powered, undersea autonomous torpedo. Russia has also established superiority in non-strategic, dual-capable systems that can be armed with either nuclear or conventional weapons. This includes the SSC-8/9M729, a ground-launched cruise missile that the United States alleged was in violation of the Intermediate-Range Nuclear Forces (INF) Treaty. The SSC-8/9M729 gives Russia the ability to place under nuclear threat important NATO choke points, such as ports and airports which are crucial for the alliance in terms of force deployments across the Atlantic.[8]

President Donald J. Trump’s administration sought to address the issues raised by these deployments in nuclear arms control negotiations with Russia. The Trump administration insisted that the two sides, before renewing the New Strategic Arms Reduction Treaty (New START), should first reach a political framework agreement calling for a new treaty that would verifiably cover all nuclear warheads, establish updated verification measures, and include China. Russia made its own demands, insisting that a new treaty should address missile defense and other issues such as conventional prompt global strike systems. The fate of New START carried over into the early days of Joe Biden’s presidency, when the United States and Russia agreed to a five-year extension of the treaty just days before it was set to expire.

The United States withdrew from the INF Treaty in August 2019 on the grounds that Russia’s deployment of the SSC-8/9M729 was in violation of its terms. The treaty’s demise raises the possibility that the United States could now deploy missiles of the previously forbidden range in Europe. These would most likely be conventional missiles, as NATO’s June 2021 communique stated that the alliance has no intention of deploying nuclear missiles in Europe.[9] Russia continues to insist that the deployment of the SSC-8/9M729 complied with the treaty’s terms, but it also withdrew from the treaty. In response to the U.S. withdrawal, Russian President Vladimir Putin proposed a moratorium on the deployment of missiles formerly banned by the INF Treaty. His proposal included mutual verification measures focusing on the Aegis Ashore ballistic missile defense systems deployed at NATO bases in Poland and Romania and on Russian military facilities in Kaliningrad. Putin claimed that these measures would confirm the absence of the SSC-8/9M729, and he promised not to deploy these missiles in Europe as long as NATO refrained from deploying similar missiles in Europe. However, the United States concluded that Russia had already deployed four battalions of the SSC-8/9M729, for a total of about 100 missiles, in regions of Russia from which they could strike NATO countries. The United States rejected Putin’s offer of a moratorium.[10] Following the renewal of New START and the demise of the INF, therefore, many questions remain about the future of nuclear arms control and its implications for European security.

Russia also poses challenges to European security through its use of hybrid methods.[11] Such methods cover a wide spectrum of activities, ranging from action just below the level of open warfare to far more subtle efforts to interfere in the domestic politics of European countries. Russia’s actions in Ukraine in 2014 exemplified the first concern. Russia employed “little green men” during its seizure and annexation of Crimea, and its support for the insurgency in eastern Ukraine remained unofficial. Future instances of such deniable interventions are a source of concern for European security. Russian cyber threats are a growing problem, as shown by the 2020 SolarWinds attack and other cases. Russia also seeks to sow division in Western societies and to undermine EU and NATO cohesion through interference in domestic politics.

Russia also threatens European security through attacks on enemies of the Russian government carried out on the territory of European countries, including chemical weapons attacks that violate the Chemical Weapons Convention. Alexander Litvinenko, a former Russian spy turned critic of the Putin regime, died in a 2006 polonium attack in London. Sergei Skripal, a former Russian military intelligence officer who served as a double agent for British intelligence during the 1990s, was the target of an attack in Salisbury, England, in 2018. Skripal was attacked with Novichok, a nerve agent originally developed by the Soviet Union and prohibited under the Chemical Weapons Convention. Skripal and his daughter survived the poisoning, but a bystander was killed. In 2020, Russian opposition leader Alexei Navalny also survived a Novichok attack. This attack occurred on a domestic Russian flight, but it generated considerable outrage in the West. Russia conducted disinformation campaigns in connection with these attacks, suggesting that Western governments were the perpetrators. Germany also accused the Russian government of ordering the killing of a Georgian national and former Chechen rebel commander who was assassinated in Berlin in 2019.

Where to go from here?

Absent a significant improvement in relations with Russia, which appears unlikely in the near term, Europe will continue to face pressing security challenges from Russia. The United States, which continues to act as the guarantor of European security, maintains levels of defense spending that are significantly higher than those of Russia. In certain regional military contingencies, however, geography and recent force improvements could give Russia the upper hand. Such concerns are likely to become especially acute as the United States increasingly turns its attention to the Asia-Pacific to address the rise of China. The 2018 U.S. National Defense Strategy declares that the United States should maintain the capability to defeat one great-power adversary in one theater while simultaneously deterring, but not necessarily defeating, another great-power adversary in another theater. This would place the United States in a difficult position if it were called upon to fulfill alliance commitments in Europe and Asia simultaneously.[12] Such circumstances will place growing pressure on European countries to bear an increased share of the burden for their own security in the coming years. This imperative is likely to engender difficult conversations about the future division of labor in the transatlantic alliance, as well as discussions of whether and how Europe should pursue strategic autonomy.

European defence and the demands of strategic autonomy