European defence and the demands of strategic autonomy 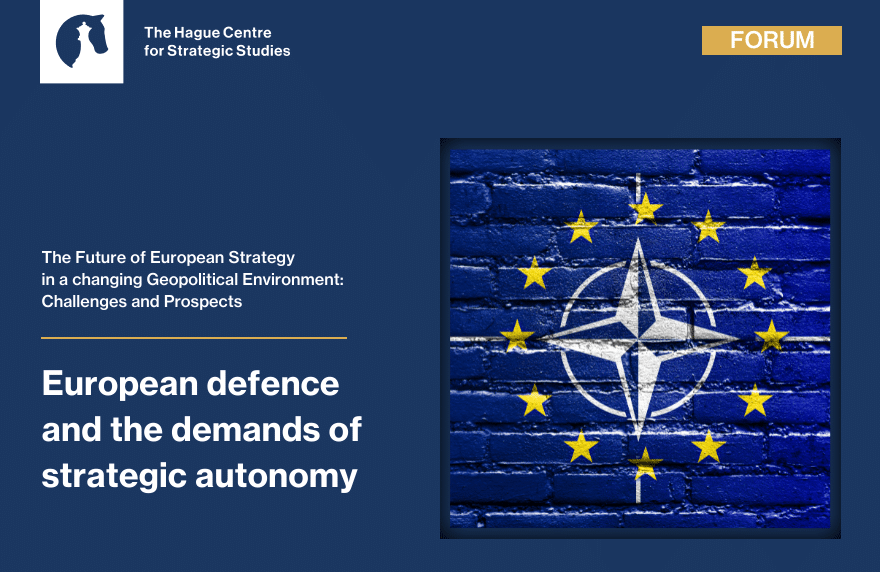 Fundamental changes in the international system are calling into question the EU’s understanding of itself as a security and defence actor. Challenges such as the rise of China, Russia’s hybrid tactics, questions about the long-term durability of the transatlantic relationship, the risk that terrorist groups may seek to fill strategic vacuums, threats to the global commons and maritime routes, the COVID-19 pandemic, and climate change are driving debates on European Union (EU) security and defence. What is more, these threats and challenges are gradually becoming the yardstick against which EU strategic autonomy is being measured. The EU no longer inhabits the prosperous, secure or free world that it referred to in the 2003 Security Strategy. The 2016 EU Global Strategy made clear that the Union needs to invest greater energy into protecting Europe and its citizens. More recently, in November 2020, the EU conducted its first-ever classified intelligence-led threat analysis for security and defence. It painted a bleak picture for the Union over the next 5-10 years. The forthcoming ‘Strategic Compass’ is to serve as a pathfinder for a response to these challenges and threats by rejuvenating the EU’s approach to crisis management, resilience, capabilities and partnerships.

Yet there is a disconnect between the threats facing the EU, the will that exists for political action, and the required capacities. Consequently, critics of the concept of strategic autonomy point to the mismatch between rhetorical ambition and the reality of (in)action. This contribution to the forum briefly probes this problem and argues that it will not be any easier for the EU to provide for its security and defence after the Strategic Compass is delivered for two reasons: first, the original interpretation of crisis management is over; and second, the Union will over time have to assume more of a role for its own territorial security. Strategic autonomy will be forged in the Union’s response to these dual concerns.

Managing the crises of the future

For more than twenty years, the EU has defined success in security and defence as an ability to autonomously undertake crisis management and capacity-building missions and operations. In a basic sense, it has achieved this goal as it has deployed over 30 civilian and military missions and operations to regions such as the Sahel, the Horn of Africa and the Western Balkans. However, for all of this success, there are questions about the EU’s ability to comprehensively undertake and lead on military operations. The Union was absent from Libya and Syria, even though these conflicts were the type of operations the EU should have been able to conduct. What is more, even when European states did conduct air operations in Libya in 2011 they struggled: Europeans were responsible for 90% of all air-strike sorties, but the Americans contributed 85% of the fuel and intelligence, surveillance, and reconnaissance (ISR) capabilities required.[1] Beyond military operations, the EU will increasingly face risks when engaged with military capacity-building as adversaries could be better equipped and third states such as Russia or China could offer more attractive equipment packages to partner states.

It is worth asking whether the EU would be better prepared for a Libya-style campaign today than it was a decade ago. Most contemporary crisis management concepts are emerging in response to the geopolitical realities of the day. Consider how Russia is embedded in Syria and Libya. Observe how Turkey’s hostile actions in the Eastern Mediterranean are increasingly bound up with its interests in Libya. See how China, with its naval foothold in Djibouti, has also conducted live exercises in the Mediterranean. If the EU has struggled to militarily assert itself in the permissive environments that characterised the turn of the millennium, then there are legitimate questions about whether it can realistically cope in less permissive operational theatres characterized by the presence of great powers, continued asymmetric pressures (such as terrorism), sophisticated technology, hybrid threats (including cyber-attacks and disinformation campaigns) and structural risks (most notably climate change).

The EU has stated that it should be prepared to protect Europe. EU Treaties establish the political foundation for territorial defence, as the Mutual Assistance and Solidarity Clauses stress that the Union and its member states should come to the assistance of other member states that are subject to terrorist attacks or man-made and natural disasters on their territories. For reasons related to nuclear and conventional defence, most EU member states that are part of NATO stress Article 5 of the Washington Treaty as the bedrock of their collective defence. However, the EU’s own provisions are particularly important for those EU member states that are not in NATO. In reality, even NATO-EU members can see merit in activating both the Alliance and the Union in times of crisis. Yet, what the protection of the EU means in practice remains unclear, especially when it comes to potential military support.

For the foreseeable future, the Union will not focus on nuclear deterrence or confront Russia militarily. In any case, there is a wider debate about whether European allies of NATO can deter Moscow without American support. Some scholars argue that Europe has ‘sufficient force structure in terms of brigades and squadrons to do so.[2] Others believe that self-sufficiency in defence is a mirage that would require rapid investments amounting up to US$357 billion[3] and the development of integrated command structures and relevant C4ISR capacities.[4] However far apart EU members and European NATO allies are when it comes to this debate, it is perhaps noteworthy that the defence projects being developed under the European Defence Fund and Permanent Structured Cooperation (including unmanned ground systems, electronic attack capabilities and stealth technologies) seek to boost Europe’s deterrence and military edge.

In search of credibility

The EU’s ability to manage crises and to protect Europe will face significant challenges – in a more geopolitically hostile world, this much is clear. The question is how to remedy the situation. Some of the answers are staring EU governments directly in the face, and have been for years: 1) there is a need for more defence spending to sustain an expansion and modernisation of armed forces; 2) the EU needs to get better at mobilizing the political will to utilise the military before adversaries do so in zones of interest for the Union; and 3) there is a need to dedicate more armed forces for EU missions and operations, as well as to put in place an effective and robust command and control structure. We do not need the Strategic Compass to instinctively understand these challenges, but what if EU member states do not respond to them?

Short of these three factors, the EU can still re-conceptualise how it conducts crisis management and capacity building, and it can provide clearer guidance for what the protection of Europe means in practice from the perspective of security and defence. Here, geographical proximity and intensity should be the watchwords of EU engagement – the Union should be able to respond alone to crises that stand a chance of spreading into the EU and that close partners have no interest in conducting themselves. This means re-ordering how the EU rapidly deploys technologically advanced forces and capabilities to zones of interest. Additionally, the EU needs to prepare for how land conflicts will interact with the space, maritime, air and cyber domains. In this regard, force packages need to be better integrated through mechanisms such as PESCO to provide the EU with the military capacities required to protect logistics and supply lines, deter action by third powers, and penetrate anti-access-area denial bubbles.

When it comes to protecting Europe, the first task will be fulfilling existing projects such as military mobility. In addition, there needs to be an expanded vision for critical infrastructure protection, critical supply security and border management. A direct military response will not always be required, but there is a need to have integrated planning between European Commission services, the EU Military Staff and the European External Action Service. What is more, the EU can focus its operational response on territorial security in the short term by rapidly investing in cyber defence and hybrid capacities and response teams. There is a need to strategise about how the EU can proactively respond to hybrid threats; for example, this could involve significantly boosting the resources and size of the EU’s Hybrid Fusion Cell while better linking it to NATO structures.

The EU’s response to the disconnect highlighted at the start of this essay should be ambitious but gradual. Past failures and modest successes will cast a shadow over the Strategic Compass process. By March 2022, when the Compass is delivered, the EU should have a clearer understanding of the military and in what ways it could consider employing it in a more dangerous world. Once the Compass is delivered, there should not be any need for further reflection for the next few years – political action, investments and operational credibility will be the only measures of success.