The transatlantic relationship: Radical reform is in the U.S. national interest 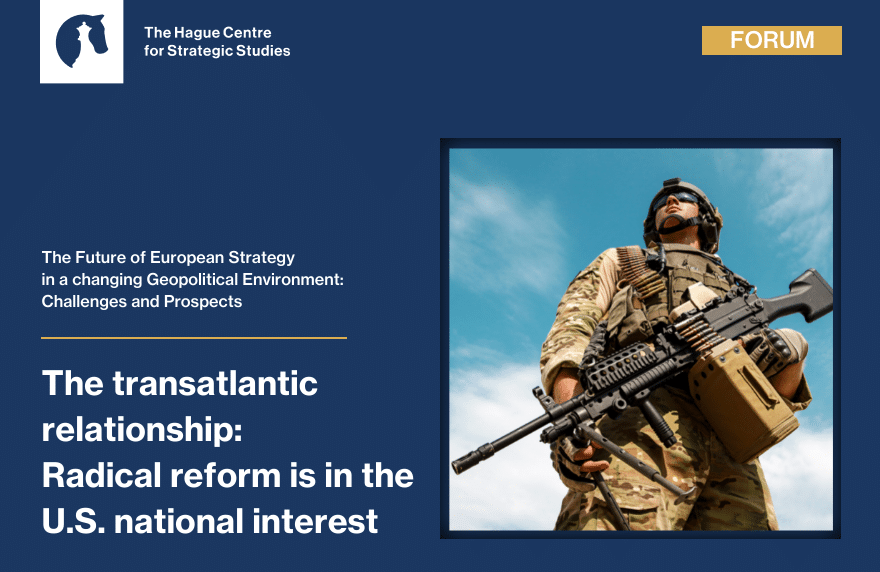 “The U.S. has allies because it has interests.  It does not have interests because it has allies.”[1] The North Atlantic Alliance is now over 70 years old and much has changed since its birth.  Indeed much has changed since the Soviet Union collapsed, thirty years ago.  The United States role in the alliance, its interests and how best to pursue them, are due for a serious reconsideration, but the “Interim National Security Guidance” of the Biden administration instead simply valorizes all of the U.S. alliances, without saying much about their specific purposes.  The U.S. has major reasons for a reappraisal.  China is a tough strategic competitor, arguably tougher than the USSR.  A militarily renascent Russia, though a shadow of the Soviet Union, is still troublesome.   U.S. domestic political and social divisions, fiscal commitments, and economic imbalances combine to diminish the energy that the U.S. can bring to national security policy.  And we do not know what the enduring impact of the Covid pandemic will be on the U.S.

The U.S. joined the Transatlantic Alliance for one strategic reason:      the USSR emerged from the war stronger than any possible European military coalition at the time.  U.S. strategists feared the specter of a Soviet Empire in Western Europe.  Such an empire could have made life difficult on this side of the Atlantic.  Only the U.S. could create a balance of power.  Overtime, it created an imbalance of power in favor of the West, even as the USSR mismanaged its internal affairs, and ultimately imploded.  One can excuse the U.S. for not then simply having a victory parade and coming home; prudence suggested a slow disengagement.  Instead, the U.S. led the expansion of NATO eastward.  Though strategic reasons were advanced for this policy, they were thin gruel.  The U.S. caught the victory disease: an expanded NATO would be the vehicle for a liberal revolution across Europe, which would not cost much because Russia was prostrate and destined for a cooperative liberal future itself.  Some of us even then expected failure for this strategy, and it has failed.

The Biden Administration should look carefully at U.S. interests in Europe and the threats to those interests.  The U.S. still has an interest in NO hostile empire in control of Europe.  The odds of such an outcome are now very low, for two reasons.  The first is that Russia is much weaker than the Soviet Union.  The second is that the four principal European powers are much stronger than they were in 1949.  Two of them are nuclear weapons states.  Three are members of the European Union, and all are members of NATO.  The Europeans collectively outspend Russia on military power and have more people in uniform.  Whether the U.S. is or is not in Europe, the odds of Russia establishing an empire there are low.  The U.S. might wish to do something to lower these odds further, but this is a far cry from the exigencies of 1949.  And we must remember, in 1949 the U.S. was free to focus vast resources on Europe.  Not so today.  Given Europe’s strengths, Russian weakness, and the China challenge, the U.S. at minimum needs a different kind of strategic relationship with Europe, in which Europe carries most of the burden of its own defense.[2]  This alone would free U.S. resources for other priorities, adding to U.S. power.  Many have discussed a more specific way that the Transatlantic Alliance could add to U.S. military power, and that is the competition with China.  We should be clear, however.  Europeans are inefficient military partners in Asia simply because their assets must travel vast distances to get there.  NATO, a military alliance, is simply not useful in Asia.  It is highly useful defending Europe to free U.S. forces for Asia.

The competition with China is multifaceted—economic, technological, political, and diplomatic.  Here Europeans can add much, even though the U.S. and Europe will often disagree.  Neither has an interest in China leveraging access to its giant markets to buy others’ technologies at bargain prices, or steal them with impunity, and then lock-in any leads this might create.  But the punch line here is that this is European Union business.  Efforts to drag NATO into this struggle are mainly rhetoric.  But recognizing the capacities of the European Union is not the same as mobilizing them in the service of U.S. purposes.  This Transatlantic Alliance needs to be rather different than the past.  Put bluntly, the U.S. cannot lead; it must partner.  The U.S. will not always get everything it wants.  More importantly, if the U.S. accepts that it needs the Europeans to look after themselves militarily, in order to free U.S. resources for the Pacific, U.S. diplomats will also need to give up a crutch they have long employed with the Allies, the implicit message that the U.S. security commitment depends on faithful followership in other domains.  That tactic is fraying in any case, even given the U.S. commitment to NATO.  A more balanced military relationship within the alliance would mean an even more balanced military relationship in other domains.

It is easy enough to suggest these changes in policy, but what might they look like in practice.  Academics often understand little about the mechanics of security cooperation and diplomacy.  So these are “Blue Sky” suggestions: First, the military missions on both sides of the Atlantic must be rearranged.  A suggestive passage from the Biden Administration’s new strategy points the way: “We will work with allies to share responsibilities equitably, while encouraging them to invest in their own comparative advantages against shared current and future threats.”  The comparative advantages that the U.S. brings to the alliance are Intelligence (where it spends 80 billion dollars a year), offensive nuclear forces (the tools of the much vaunted nuclear umbrella,) and naval power (especially the most costly and complicated assets– nuclear attack submarines and nuclear powered aircraft carriers, though these would be in great demand in any Asia conflict).  The comparative advantage that the Europeans could bring to the alliance are ground force units and tactical aircraft.  Yet, the Europeans have been rather lackadaisical- not in buying such units—they have plenty, but in bringing them up to standard and ensuring they can quickly get to eastern Europe where any trouble would likely start.  This should be the new division of labor.  To institutionalize it the Supreme Allied Commander Europe (SACEUR) should be a European.  The senior naval command that once existed, Supreme Allied Commander Atlantic (SACLANT), should be restored and should be held by an American.  In 2018, NATO announced a goal of being able to bring 30 combat ready maneuver battalions, 30 fighter squadrons, and thirty warships to any challenge on Europe’s periphery within 30 days.  We should decide that the battalions and squadrons should be entirely European.   And in the average peripheral contingency, most of the ships too should be European.  The U.S. would guard the open oceans, assist Norway and Iceland, and deploy small contingents to Eastern Europe to remind the Russians that a war with Europe is a war with the U.S.

What can the U.S. can do to institutionalize a stronger relationship with the European Union?  The major European states themselves have a fondness for relating to the U.S. bilaterally when it suits them, so the under-exploitation of this institution is not only the fault of the U.S.  In some sense, the U.S. must discipline itself and discipline the Europeans.  For too long the U.S. ambassador to the European Union has taken a distant back seat to the U.S. ambassador to NATO.  This has to stop, but it won’t without effort.  One constraint that might help is that the U.S ambassador to NATO and to the EU should be the same person.  NATO headquarters is not far from the EU’s headquarters in Brussels.  The deputy chiefs of mission could handle day-to-day relations with each institution, though these positions demand the most experienced veterans of the Foreign Service.   A single ambassador would handle strategic relations with Europe, both security relations narrowly defined, and the geo-economic relations that are growing in importance.

The Biden Administration is staffed with security policy experts who spent the early part of their careers in the Uni-polar moment.  Their lodestar is the “U.S. led liberal world order.”  The distribution of raw power in the world is no longer uni-polar.  The “liberal world order” is at best a “liberal coalition” within a much more competitive and familiar balance of power system.  These experts need to change their frame, and return to a more traditional view of alliances as tools of power, rather than building blocks for a permanently transformed world.

[1] I attribute this to Richard M. Nixon, though I cannot find a source.

[2] Here I argue from the standpoint of reform; in other work I have advocated more revolutionary changes in the Transatlantic Alliance.

Do we need a new vocabulary for talking about European strategy?