Do we need a new vocabulary for talking about European strategy? 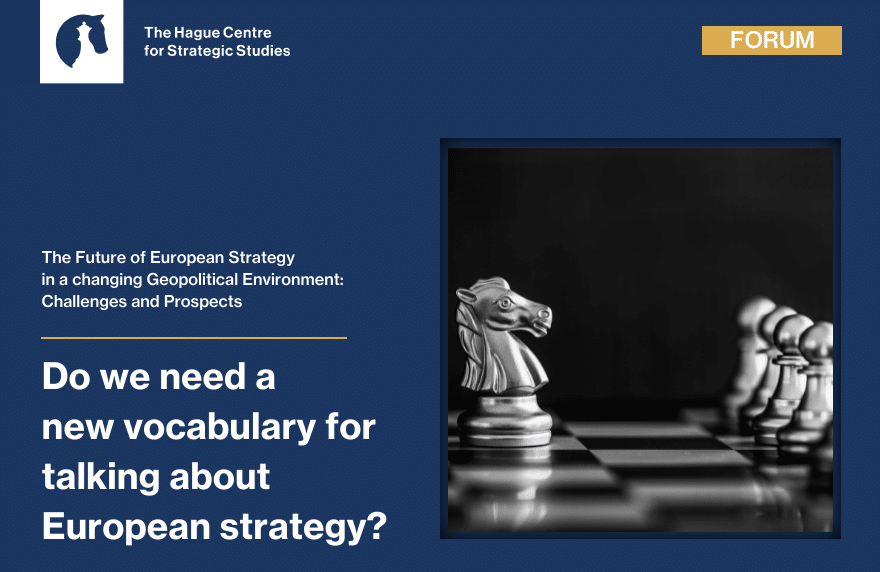 It is not surprising that the rise of China has resulted in a renewed focus on the potential for the future to look like the past. The tone of the language that is used by both those who criticise Chinese policy, on the one side, and those Chinese voices that respond to such criticisms, on the other, does indeed revive memories of back and forths across a previous Cold War divide. And the increasingly sharp divisions between competing value systems and conceptions of how the world should be governed and ordered do indeed look quite bipolarish. For example, the European Commission calls China “an economic competitor in the pursuit of technological leadership, and a systemic rival promoting alternative models of governance.”[1] The UK similarly refers to the “systemic challenge” that China “poses to our security, prosperity and values – and those of our allies and partners.”[2] But identifying (some) similarities is not the same thing as finding an identical carbon copy, and it is important to try and work out what is different as well as what looks familiar. China might be a competitor in some areas, but it is also a significant (at least) economic partner for most states. In a new geopolitical environment, Europeans need to develop a new vocabulary to guide action that reflects the messy complexity of this newness, and not assume that what worked with the cleaner and clearer dichotomisation of the bipolar past will work in the future too.

There has been a hardening of positions on China in a number of western liberal democracies in recent years. And yet the future global order is unlikely to be one of clearly defined and shared single positions that split the world into two mutually exclusive blocs or camps. Individuals, countries and organizations have a variety of different views of China in different issue areas, and a variety of different relationships too; or at least, this is the aspiration. The basis of a systemic China challenge has been identified in a number of areas. In the way that basic conceptions of how human rights should be defined, understood, and operationalised in key agencies of global governance for example. And through the promotion and validation of types of governments and governance that do not share European liberal preferences. And for some, through a challenge to the essential nature of a rules based international order per se. And yet, there is the recognition that finding effective solutions to most if not all of the major international global challenges will be at best less effective without China’s participation; and perhaps even impossible. The environment is a very good example, but not the only one. And this is why the argument that China was a systemic rival to the EU that was quoted above was immediately preceded by the assertion that it was “simultaneously, in different policy areas, a cooperation partner with whom the EU has closely aligned objectives, [and] a negotiating partner with whom the EU needs to find a balance of interests.”

And then we come to economics. During the bipolarity of the Cold War, it would be highly unlikely (to say the least) for a country to be allied with the US on security issues or when it came to fundamental values and principles, but simultaneously to be strongly allied to the Soviet Union when it came to economic relations. That is not the case today. Even countries that have become the biggest critics of Chinese domestic policies or have territorial disputes with China that could spill over into something else typically have extensive economic relations with China at the same time. To say that this is the modern-day equivalent of standing firm with the US and opposing the Soviet Union over a heavily militarised border, while at the same time having deep and extensive economic links across that very same border, is clearly an exaggeration. But it is an exaggeration that contains a germ of truth within it.

In fact, treating economics as a single issue area is problematic in itself, as China simultaneously presents different opportunities and threats to different countries in different economic areas. As China will, in the words of the UK integrated review, “contribute more to global growth than any other country in the next decades,” for a number of companies in a number of sectors, China represents the best chance for future sales growth and profits. As was the case in the aftermath of the global financial crisis , attracting Chinese investment might fill a gap as governments and companies deal with the commercial and financial consequences of the pandemic. But at the very same time, for a number of governments (and some companies) there is worry that Chinese investment might result in shifting economic (and subsequently) political geographies, disruption to the distribution and price of key resources, and vulnerabilities from being too dependent on interactions with the Chinese economy. And potentially the loss of technological advantages and leadership. This helps explain why half a year after the EU Competition Commission urged member governments do whatever it took to prevent European companies from being bought by foreign government-backed enterprises (with a particular eye on Chinese ones), the European Union sought to ease access to the Chinese market for European firms by reaching an investment agreement with China.

All this means that we are unlikely to see the emergence of a bipolar international system; or at least one that mirrors the bloc-type rivalry of the Cold War era. To be sure, one goal of decoupling from China is to reduce economic linkages. But a second reason for questioning the bipolarity argument is because it is companies, not governments, that make investment and trade decisions. And while governments can do a lot to influence company behavior by providing incentives or impediments, much will have to be done to replace China as a key source of a whole range of goods and resources. The same is true when it comes to making China so unattractive (or alternatives so attractive) that investing and producing in China declines to the point that it makes a real difference. It is notable that, despite the language of decoupling and the economic impact of the pandemic, foreign investment into China actually increased in 2020 over 2019, with China overtaking the US as the biggest recipient of FDI that year.

A third reason is found in the nature of alliances. For the future world to be truly bipolar, we would need to see a coalescence of groups of states around each of the poles. There are signs of this, with China on the opposite side of dichotomised divides to western states on a number of issue areas. The coordinated imposition of sanctions on some Chinese officials, in response to Chinese policy in Xinjiang, by the EU, the US, Canada and the UK is a good example. But policy coordination cannot be assumed on all issue areas. The above-mentioned EU-China Investment Agreement was not met with wholehearted and total support. That was partly because of questions about its efficacy; would it really result in the political and economic changes in China that it was explained as seeking to attain? But it was also partly because it was seen as Europe doing things on its own rather than seeking a coordinated China position with the incoming Biden administration. When it comes to seeking economic gains, the idea of being in a race to gain an advantage in unlocking potential benefits still seems to influence policy making in a number of places.

Conversely, even those who share China’s dissatisfaction with the current global order do so with different degrees of enthusiasm. That India and China share a desire to shift the distribution of power in global governance institutions and have worked together (and with others) to establish the New Development Bank doesn’t stop them from being on the opposite side of debates on other issue areas. For others, a shared position with China on the failings of the existing global order does not always result in a shared position on how to reform it (or what to replace it with).

The challenge posed by a rising China is even starker for those states with closer ties to China than European ones. For many in China’s region, it is an even more important economic partner and also a much more likely source of political instability and insecurity. Can countries like Vietnam and the Philippines, for example, maintain their territorial claims and guarantee their security whilst simultaneously building a strong trade and investment relationship with China that will last? For Australia, the prospect of direct military conflict with China might be remote. But when China takes over a third of your exports,[3] and specific sectors are even more dependent on a single market, how confident can you be that access to that market is guaranteed when even simply talking about the concerns you have about China can generate robust Chinese responses.

In the long term, it might not be possible to treat China as a key economic partner in some areas, whilst rejecting Chinese investment in other sectors. Or more fundamentally, to engage China economically, to seek common ground in dealing with common (non-traditional) security issues, and simultaneously confront and sanction it on other issue areas. But as long as the conception of China as an economic opportunity remains – and of even greater potential opportunities in the future – then a world of fixed configurations of alliances and antagonisms does not seem the most likely outcome in the medium term. To be sure, some partnerships will be more comprehensive, deep seated and long lasting than others. But for a really bipolar order, all relationships on either side of the divide need to have bloc-type characteristics. Perhaps it is time to move away from trying to reuse concepts and terms designed to explain a previous era and come up with new ones instead. Ones that can capture the complexities of a world with some dichotomising characteristics, but which lack the bloc or camp-type relationships of the previous bipolar era. The search for parsimony and clarity is entirely understandable. But if the real world is messy and complex, then trying to impose clarity using concepts defined to describe previous eras isn’t always wholly helpful.

[1] European Commission, “EU-China – a A strategic outlook” (The European Council and the Council, 12 March 2019) High Representative of The Union For Foreign Affairs and Security Policy, Joint Communication to The European Parliament, https://ec.europa.eu/commission/sites/beta-political/files/communication-eu-china-a-strategic-outlook.pdf.

How do we start thinking about European strategy?

The transatlantic relationship: Radical reform is in the U.S. national inte...
Scroll to top