Request for Consultation: Definition of “Stability of Cyberspace” 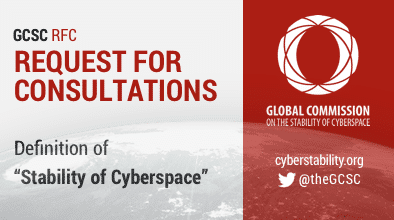 Purpose: This public consultation procedure seeks to solicit comments and obtain feedback on the definition of “Stability of Cyberspace”, as developed by the Global Commission on the Stability of Cyberspace (GCSC). The definition constitutes an important element of the GCSC Report that the Commission aims to launch in November 2019. For the same purposes, the Commission previously issued a Request for Consultations (RFC) on its Singapore Norm Package, which contains a set of newly proposed global norms to guide responsible state and non-state behavior in cyberspace.

Methodology: Submit your feedback using the Template Guidelines to the GCSC Secretariat (cyber@hcss.nl) by COB 6 September 2019.

Current status: The proposed definition of Stability of Cyberspace is the result of contributions and consultations by GCSC Commissioners and the expert advisors, as well as consultations and joint meetings with external stakeholders. The intent of this RFC is to facilitate and encourage broader feedback from external stakeholders on the current deliberations of the Commission on its final report – in particular on the definition of Stability of Cyberspace as formulated below.

Next steps: Once public comments have been received, the GCSC Consultation team (consisting of the GCSC Secretariat and Chairs of the Research Advisory Group) will collect the received comments and present them to the Commissioners at the next GCSC meeting. The GCSC may consider to implement the suggestions and/or feedback in the GCSC Report to be published by Q4 2019. All submissions will be handled confidentially and will only be read and used internally by the GCSC.