New Snapshot | Capability and Ambition Mismatch in the Indo-Pacific: A Middle Power Strategy for the EU 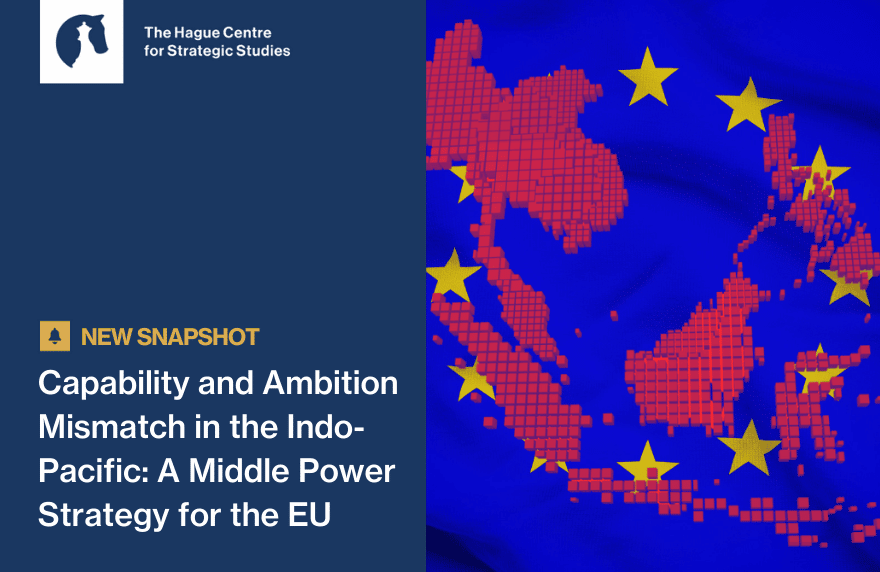 How can a middle power strategy in the Indo-Pacific enable the EU to pursue greater strategic autonomy?

The latest HCSS Europe in the Indo-Pacific snapshot is out now, by assistant analyst Stella Kim and senior strategic analyst Paul van Hooft, and argues that by analysing the strategies of prevailing middle powers in the region, the EU can improve its own approach in the Indo-Pacific and settle on one better suited for its capabilities. The EU interest in the Indo-Pacific stems from the importance of region not only as a centre of geopolitics but as the home of four in ten of its largest trading partners. So, Indo-pacific waterways are essential for EU trade. Since 2021, the EU has had its own Indo-Pacific Strategy along with a High Representative.

A middle power strategy for the EU matches the EU’s experience, behaviour and capabilities. European middle powers lack a robust military presence in the region and are less willing to commit more military might, as Russia is regarded more of a threat than China to European interests. So, an alternative approach is needed. Middle powers, which frequently utilize multilateral solutions to international problems, provides a viable alternative. The EU is itself not a middle power, but an organisation of middle powers but it could de facto function as a middle power while seeking to expand its influence in the region.

The Indo-Pacific provides many opportunities for middle power diplomacy. For example, by focusing on infrastructure, connectivity, economic development and non-traditional security issues (human assistance and disaster relief, illegal fishing, anti-piracy, climate change), a grouping of middle powers could bring less of a security-centric focus on the region. This paper will take a closer look at prevailing middle power strategies in the Indo-Pacific, including of South Korea, Australia and Indonesia, and how the EU can best model its own strategy.