Lecture on Big Data and US Politics

Just days after the Iowa caucuses, the first contests of the 2020 presidential race, HCSS data scientist Paul Verhagen will examine the increasingly important role that big data plays in the political arena during a lecture in Groningen.

Efforts to influence voters are as old as politics itself, but technological developments have led to the explosion of data-driven campaigns. Though it is not a uniquely American phenomenon, one can look at recent elections in the United States to see how the exploitation of big data is transforming politics. Both the Trump and Clinton campaigns, for example, attempted to harness big data to deliver electoral success during the 2016 presidential election.

At The Hague Centre for Strategic Studies, Verhagen focuses primarily on translating data analysis into concrete recommendations for clients. He has extensive expertise in quantitative research methods such as text mining, social network analysis and geo-political risk models. On the content side he primarily works on China related topics such as 5G and AI, as well as on trade related issues including the China-US trade war and Iranian sanctions.

Verhagen is also actively involved in US politics, he is co-author on a forthcoming book on the American presidency and a member of the executive committee of Democrats Abroad, the Netherlands.

The lecture will take place in the HeerenHuis, Groningen, on February 6th, at 20:00. 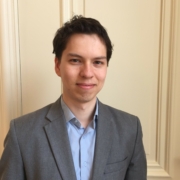