JASON ‘35 under 35’ | Joris Teer: Great power rivalry is heating up 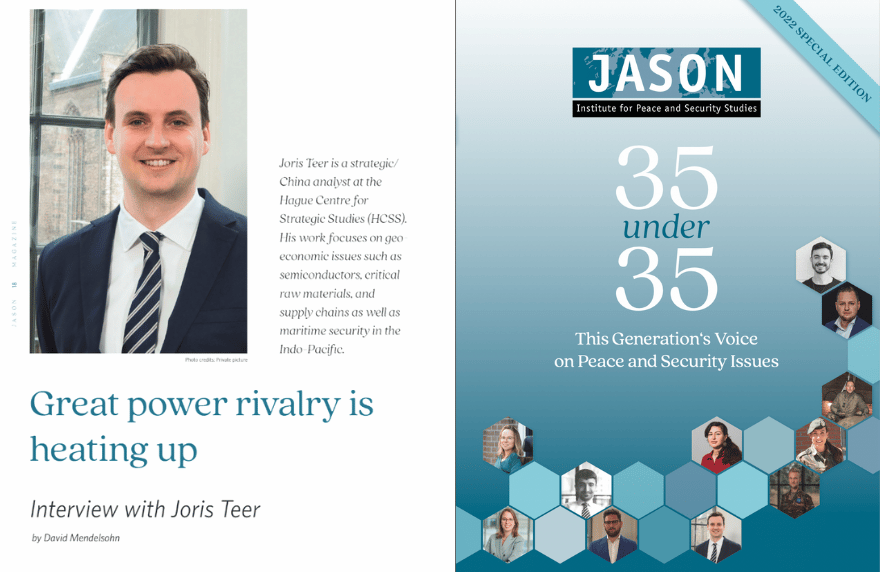 Joris Teer is a strategic/ China analyst at the Hague Centre for Strategic Studies (HCSS). His work focuses on geoeconomic issues such as semiconductors, critical raw materials, and supply chains as well as maritime security in the Indo-Pacific.

Interview with Joris Teer by David Mendelsohn, for the JASON ’35 under 35′ magazine.

Welcome Joris. How did you get into this line of work and where did your interest in strategic analysis and China come from?

From a young age, I have been interested in how domestic Dutch politics affected Dutch society. That is what led me to pursue a degree in political science and international relations at Amsterdam University College (AUC). Since my first year at AUC, I have been doing research on the effects of hard clashes between states on the economic security of the Netherlands, and more broadly the European Union. While attending the Netherlands-Asia Honours Summer School, I realised that the rise of China was an extremely important international development and I wanted to focus on it.

My shifting area of focus from the domestic to the international is logical if you take the events of the last ten years into account. These events are elements of a fractured post-Cold War order and the relative certainty that it provided. As a great power rivalry is heating up, the effects of Russia’s energy politics, China’s zero-covid policy, uncertainty around the future of Taiwan, the US tech offensive against Beijing and OPEC+’s unwillingness to pump up more oil, increasingly defines the lives of Dutch and European people. This is especially true for those who are less well-off. There are fewer and fewer certainties in the world. In this new era, Dutch and European politicians and policy-makers are tasked with making our societies and economies more resilient to the shock effects of geopolitical earthquakes. A strategic analyst like myself helps politicians to anticipate what these shocks may be, when they are likely to occur and how to prepare for them. For instance, my colleague Mattia Bertolini and I recently published a report on the Critical Raw Materials for the Semiconductor Industry.

On evidence-based policy-making, George Perkovic of the Carnegie Endowment recently said that “the problem is not lack of knowledge amongst political leaders but rather the political incentives that drive them to ignore knowledge”. How do you reflect on his assessment and do you recognise this in your own line of work?

That probably has some truth to it. Take the visit of Nancy Pelosi to Taiwan. It was popular in the United States, but did it contribute to the goal of deterring aggression by China against Taiwan, and maintaining peace and stability across the Taiwan Strait? I am not sure. In his new book Avoidable War, Kevin Rudd, the former Prime Minister of Australia, makes a case against taking provocative actions which do not contribute specifically to a strategic goal. The jury is still out on whether the Pelosi visit did this.

When we examine the conflict in Ukraine, newer forms of conflict such as cyberwarfare have certainly been a characteristic, yet the war is playing out quite ‘conventionally’ means. Have we perhaps overstated the role of this technology in war?

In the interdependent and globalised world we live in, great powers can badly hurt each other with mostly economic means. Think of the weaponisation of energy by Russia against Europe and the use of US technology against China and Russia. US National Security adviser Jake Sullivan was explicit about the ambitious goal of economic weapons: “If implemented in a way that is robust, durable, and comprehensive, export controls can be a new strategic asset in the US and allied toolkit to impose costs on adversaries, and even over time degrade their battlefield capabilities.”

There are many security threats in the foreseeable future. Which one do you think has the highest likelihood of impacting society?

At HCSS we try to assess likelihood and impact separately. In terms of high likelihood, we are looking at hard economic competition. This will also affect rich countries like the Netherlands. Beijing will respond to the US attempts to choke-off the development of China’s chip sector at some point, perhaps through weaponising the critical raw material value chains they control. These materials are necessary to manufacture anything, from wind turbines, to solar panels and computer chips.

In terms of high impact but lower probability events, any clash between the US and China over Taiwan, the South-China Sea or the East-China Sea concerns me. Contrary to Ukraine, the US has given security guarantees to Japan, South Korea, and Taiwan. This means that two superpowers are looking each other directly in the eye.

Do you have any tips for young professionals and the next generation of international security experts?

Since jobs are scarce in the field, find some way to distinguish yourself. My focus on China and my experience with living in Beijing and Shanghai helped me stand out. In these very challenging times, it is important to develop skills to help policy-makers grapple with tough decisions. We are living through an incredible geopolitical transition that will affect the lives of many. There is an opportunity to make a small contribution to ensuring the Netherlands and the European Union are more resilient to these geopolitical shocks.