Jagannath Panda in The Diplomat | India and the Kindleberger Trap: Multipolarity Amid the Taiwan Crisis 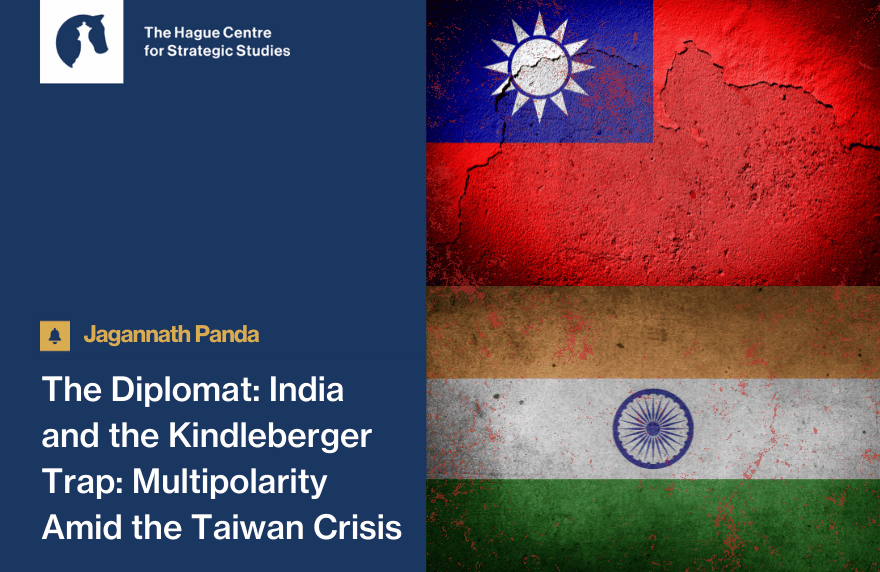 Amid the China-U.S. competition, how can India (and other middle powers) ensure the provision of global public goods?

In September 2019, India’s External Affairs Minister S. Jaishankar in his statement at an Alliance for Multilateralism meeting unambiguously stated that “the Kindleberger Trap on the shortage of global goods is far more serious than the Thucydides Trap.” Moreover, he warned against nationalism, mercantilism, violation of international law, and mechanisms or institutions that are too outdated to fight fast-evolving global challenges.

These warnings were surely a veiled indictment of China’s mercantilism, authoritarian practices, and disregard for laws like the United Nations Convention on the Law of the Sea (UNCLOS), as well as of moribund multilateral regimes like the United Nations that fail to reflect contemporary realities and have proved ineffective in preventing modern crises.

Three years later, with defining ongoing global military crises in Europe (the Russia-Ukraine War) and the Indo-Pacific (Fourth Taiwan Crisis) starting in the same year, it is time to re-evaluate the importance of the Kindleberger Trap, and also examine India’s role in sharing the global burden.

Looking back, the debates on the Kindleberger Trap have gained ground since 2017, when renowned American political scientist Joseph S. Nye authored a piece on the subject just before Donald Trump’s inauguration as the president of the United States. Nye warned of the consequences of an isolationist, weak China becoming a “disruptive free rider” and failing to provide global public goods while simultaneously continuing to rise and sliding the world into the Thucydides Trap. Though Nye did not discount the Thucydides Trap, he did deny its inevitability, stating that the effects are “often exaggerated.” At the same time, even as he worried about the world receding into the Kindleberger Trap, he did give China the benefit of doubt, calling its record a “mixed” bag. The post-COVID pandemic era is arguably tilting against China as a global goods provider, certainly not a responsible one.

What role does India play in the Kindleberger dynamic? After all, India is directly impacted by China’s military maneuvers in the Indo-Pacific, both within and beyond India’s own borders, and faces a Thucydidian Trap of its own with China, What role could India-Taiwan cooperation play in strengthening economic security and helping overcome the limitations of China as a responsible stakeholder in global governance?

The Growing Pains of Global Governance

As a burgeoning middle power economy and an emerging global power with limited clout in its extended neighborhood, India not only will be directly impacted by China’s lack of showing as a credible provider, but also can through various regional and global cooperation measures impact the running of the global mechanism itself. For example, India’s credibility received a boost as a global generic (low-cost) pharmaceutical manufacturing hub during the COVID-19 pandemic, with immense pressure to provide for not just its own population of over a billion but also the developing world. According to the Indian government, under the Vaccine Maitri initiative, India has supplied over 250 million COVID-19 vaccines to about 100 countries, as of August. However, India needs more concerted efforts to overcome its overdependence on China for essential raw materials for drugs as well as medical equipment.

The pandemic certainly exposed the self-centered vagaries of national interest and split the chasm between rich and poor countries wide open. The West came off the worst as a hypocritical entity with its hoarding of medical supplies, as well as destruction or “piecemeal and ad-hoc” donation of near-expired scarce vaccines, while the underdeveloped world coped with short supplies. China’s mask and vaccine diplomacy, which raised concerns over quality and efficacy, as well as conditional provisions, produced “mixed” results, too. Above all, international cooperation was sorely lacking; the forceful exclusion of Taiwan, which was relatively successful in fighting the pandemic, from international multilateral institutions at China’s behest underscored Chinese leader Xi Jinping’s lack of political will to put greater good above personalistic ambitions.

Soon after, the Russia-China “no limits” strategy was finalized just prior to Russia’s military invasion of Ukraine. China’s role in the Russia-Ukraine war assumed new urgency amid multiple wide-ranging, long-term ramifications for global food, energy, finance, and humanitarian crises. China’s close partnership with Russia has again put into question China’s claim to be a responsible provider of global goods.

This is not a question of capabilities (incumbent in a changing balance of power, and which China can indeed fulfill) but of intent. Xi’s fervor to avenge “100 years of humiliation” by upending the U.S.-led world order overpowers China’s proclamation to promote multipolar global governance. For example, China’s unapologetic, intensified bid for territorial unification has led to the still-emerging Fourth Taiwan Strait Crisis. By complicating crisis management and diplomacy, China’s adventurism could potentially trigger an avoidable chain reaction in the region and über-heightened tensions along contested borders in the neighborhood (including South and East China Seas as well as the Himalayas). China’s recklessness at a time when war is raging in Eastern Europe is not just deeply unsettling but also a self-defeating (responsible) power projection strategy, as potential supply chain blockades in the maritime zone would cripple the already dire global situation.

The cancellation or suspension of cooperation dialogues with the United States on issues such as climate action as a countermeasure to U.S. House Speaker Nancy Pelosi’s debatable Taiwan stopover is further widening the global trust and governance gap. Amid warnings of slower economic growth and a worsening energy shortage within China, an already struggling global economy might get another setback.

In such a situation, the role of middle powers to enlarge their proactive contribution and to co-create a united action plan becomes more significant. To avoid the Kindleberger Trap, middle powers must increase their outreach activities and reduce their reliance on the major powers to coordinate responses. In the absence of adequate multilateral intervention, it falls upon like-minded partners to prevent escalation of provocations, too. India needs a serious thought-out engagement strategy toward a range of partners in the region – including Taiwan, which is a credible economy in the Indo-Pacific.

Finding the Elusive Balance: A Renaissance via Multipolarity?

Despite its limitations, India recognizes the need to fill the governance gap, largely created by the China-U.S. hegemonic conflict, and to work toward maintaining a more equal, stable, and sustainable global economy in collaboration with diverse partners. India’s outreach to the United States, European Union, Japan, South Korea, Southeast Asian economies, Russia, Taiwan, and others is an effort to diversify its economic overdependence on China, and also to build a global profile. Its greater association with both China-centered “plurilateral” Quadrilateral Security Dialogue (Quad) and the China-led Asian Infrastructure Investment Bank (AIIB) or BRICS (Brazil-India-China-Russia) are careful attempts to maintain the balance of power and extract maximum leverage.

Moreover, as complete decoupling from China is not a likely goal (or a possible scenario) in the near future at least, India’s co-founding of the Supply Chain Resilience Initiative (SCRI) is a bold move that will provide dividends. Similarly, Taiwan’s critical role in global supply chains and its dominance in semiconductor manufacturing makes it an ideal partner for building alternative, resilient supply chains. India’s renewed vigor to hasten a free trade agreement (FTA) with Taiwan, focusing on establishing a semiconductor manufacturing hub, will go a long way to reduce dependence on China, even as Taiwan itself depends on China for raw materials.

India has so far taken a cautious approach, but the recent cross-strait crisis will only hasten this resolve. In addition, the United States’ new push to enhance cooperation with Taiwan on a range of issues could pave the way for the long-sought-after Taiwan-U.S. FTA and similar initiatives by other countries. Taiwan’s participation in the SCRI and the newly minted Indo-Pacific Economic Initiative (IPEF) becomes a viable possibility, too.

In short, India’s best bet for avoiding the Kindleberger Trap is to coalesce forces with regional economies. For example, its close partners and powerhouse Asian economies Japan and South Korea are also looking to reduce dependence on China (although decoupling is a far-off notion). Thus, the regional middle powers’ combined influence can take along emerging and interested South Asian or Southeast Asian countries like Vietnam and Indonesia. Added to that, growing extra-regional outreach (in Europe and Africa, for example) would be a step toward creating an effective, collaborative, sustainable multipolar governance architecture.