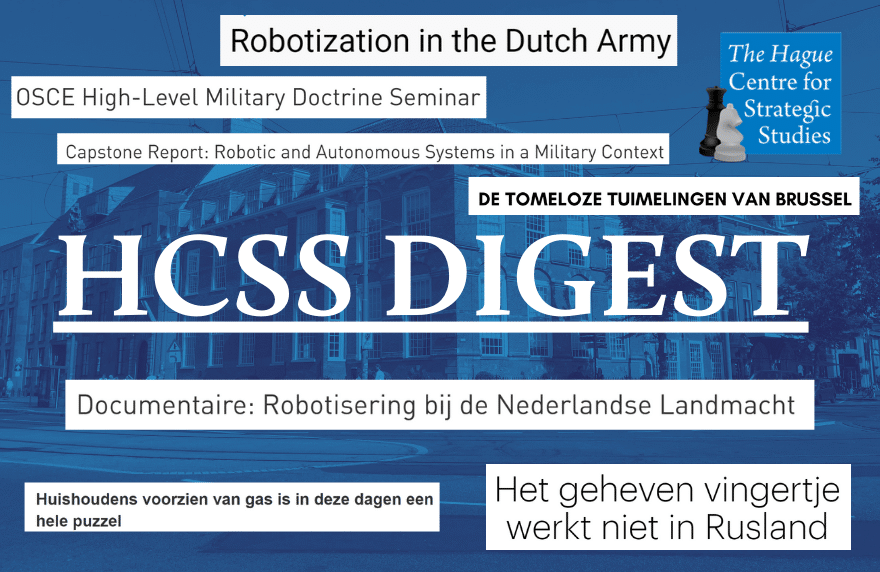 It’s all about that RAS! This week’s HCSS Digest brings you everything you need to know about Robotics & Autonomous Systems, from the very first HCSS documentary to our impressive Capstone report.

President Trump stunned his allies this week, when he… sorry, old habit.

Want to know more about how and why the Dutch Army is experimenting with Robotics & Autonomous Systems? HCSS proudly presents our very first documentary, Robotisering bij de Nederlandse Landmacht, a must-see film! Also available with English subtitles on our YouTube channel.

Militaries around the world are developing, integrating and using robotic and autonomous systems (RAS). Over a two-year period, the HCSS project “RAS in a Military Context” sought to contribute to the discussion. Our research papers cover military applicability, ethical considerations, legal discourse, requirements for cooperation and the implementation of RAS in a military context. All papers are now combined in this impressive Capstone document:

The trip of EU representative Borrell to Russia was an excellent illustration that the diplomacy European parliamentarians love so much, will have zero effect in a country that doesn’t care what we think over here, Rob de Wijk commented in his column for Trouw. Power politics should be met with power politics.

For the European Commission, 2021 has so far been a disaster year: the European vaccination strategy is faltering, and the visit to Russia by Josep Borrell, High Representative of the European Union for Foreign Affairs, turned into a complete humiliation. Bernard Hammelburg and Han ten Broeke, HCSS director of political affairs therefore had plenty to talk about in BNR De Wereld.

According to Han ten Broeke, Borell went to Moscow “unarmed” to meet the most experienced and cynical diplomat, Russian Foreign Minister Lavrov. “Europe is always looking for a ‘compromise figure’ for these functions”, ten Broeke continued on BNR Nieuwsradio, “but it should instead be someone with authority and charisma.”

Modern warfighting will see an increased use of Robotic and Autonomous Systems (RAS) and the accompanying AI. How can we implement this technology and address the risks and challenges? This new paper by Patrick Bolder, Michel Rademaker and Bianca Torossian assesses some relevant elements for the implementation of RAS into the armed forces and especially the Army.

We have to think about importing energy, such as green hydrogen. It’s unavoidable, Rob de Wijk analyzed in the New Energy for Europe bulletin. That would make us more dependent on Saudi Arabia, while Russia could become the biggest loser.

To meet the current demand for gas, the Groningen field and the small gas fields are no longer sufficient. Gas must therefore also come from abroad, but the Netherlands has to compete there with other countries that do not have their own gas reserves – countries that already have long-term contracts with gas suppliers, HCSS energy specialist Jilles van den Beukel explained to NOS.

Busy Van den Beukel was also asked for comments this week in Trouw, RTL Nieuws and the Financieele Dagblad.

Medical experts say buying the Sputnik vaccine is an option, if the EMA approves it. But there are political reasons not to do so, Rob de Wijk explains in Dit Is De Dag on NPO Radio 1: Putin is trying to achieve a political victory by selling the vaccine to the West.

This Sunday you can listen to the new episode of our BNR podcast De Strateeg, where host Paul van Liempt will discuss the future plans of the Dutch Army on Robotics and Autonomous Systems with Michel Rademaker and Lkol. Sjoerd Mevissen.

(online on Sunday morning; and did you know you can also listen to De Strateeg on Spotify and Apple Podcasts?)