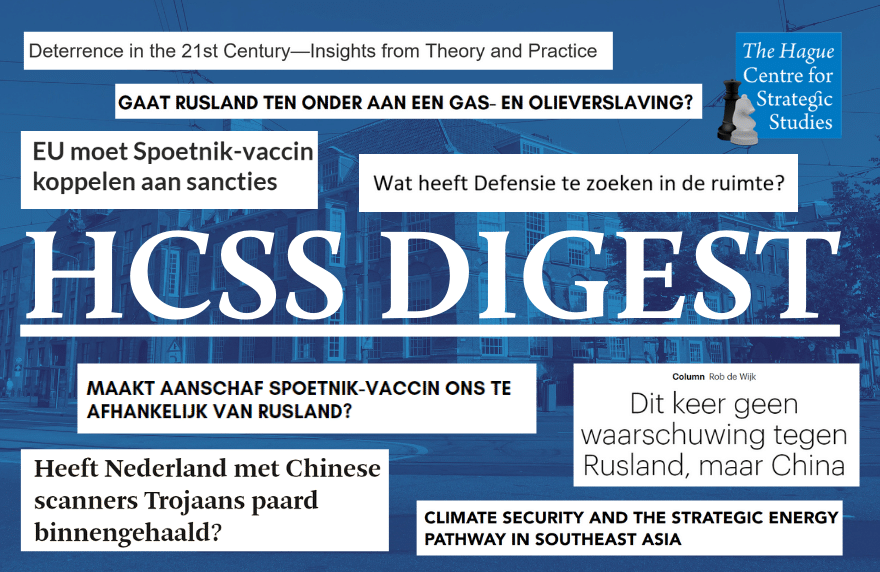 From the geopolitics of the Sputnik vaccine to Putin’s risky dependency on oil and gas, from Dutch space ambitions to China’s power politics – just in time for the weekend, here’s the new HCSS Digest!

What does Russia’s dependency on gas and oil mean for the Netherlands and the EU? Is the Dutch interest in this area the same as that of other European countries? And how should we position ourselves towards Russia? Listen to the new episode of De Strateeg, with HCSS energy experts Lucia van Geuns and Jilles van den Beukel, authors of the recent HCSS paper “Russia’s Unsustainable Business Model”.

The Russian Sputnik vaccine is not currently part of the vaccination strategy in the European Union, but it appears to be safe and effective. Should the EU negotiate for the vaccine with Putin? In podcast Dit Is De Dag, Tijs van den Brink discusses the pros and cons with Rob de Wijk.

Does buying the Sputnik vaccine make us too dependent on Moscow? “It’s not so much that we shouldn’t do it, but we should be aware of what Russia can demand from us,” HCSS analyst Patrick Bolder commented on BNR’s Spitsuur this morning. “There’s always an ulterior motive. But on the other hand, as the paying party, we can also come up with our own conditions.”

What those conditions could be? You could think of real cooperation in the MH17 investigation, or the release of Navalny, Bolder told ANP News.

Concerns are rising about the security risks of using scanners of Chinese company Nuctech, which are located at ports and airports worldwide – including in Rotterdam. “Isn’t it strange to partner with a Chinese state-owned company for your vital infrastructure, when those essential services can also be performed by European competitors?”, Rob de Wijk wonders in het Financieele Dagblad. “China is engaged in power politics. But our security awareness is poorly developed and our geopolitical thinking even less so.”

Space: the final frontier? In March, the first Dutch military satellite will be launched. The Defensiekrant asked HCSS Strategic Analyst Patrick Bolder five questions about the space ambitions of the Dutch armed forces.

Deterrence is an essential building block of NATO’s Strategic Concept and one of the vital strategic functions of the Dutch defense organization. But what does effective deterrence look like, both now and in the future? In ‘Deterrence in the 21st Century: Insights from Theory and Practice’, Frans Osinga and Tim Sweijs bring together valuable insights from renowned experts not just from Europe and the US, but also from China, Iran, Israel, Japan and Russia.

To counter the growing power of China, relations with America will have to be normalized, Rob de Wijk wrote in his weekly column for Trouw. But many European countries have already joined forces with Chinese companies and are particularly keen on the short-term gains that cooperation with China can bring.

Turkey struggles with repeated droughts and pressure on water resources grows, while measures to keep up with increasing challenges are lagging behind. Find out more in the latest Water, Peace and Security (WPS) blog.

We are hiring! Are you a master of statistics, mathematics, or computer science? Then the PhD/Analyst vacancy might just be what you’re looking for.

HCSS is honored to be featured in the Global Go To Think Tank Index Report for the sixth consecutive time. The Index is derived from a database of over  8,000 think tanks worldwide, and HCSS is ranked in 5 categories: Top Defense and National Security Think Tanks, Top Energy and Resource Policy Think Tanks, Top Foreign Policy and International Affairs Think Tanks, Best Independent Think Tanks and Top Think tanks with annual operating budgets of less than $5 Million USD.

And more congratulations are in order: Senior Strategic Analyst Jack Thompson, we wish you a fantastic birthday this Sunday!

Unfortunately, it’s a sad week of goodbyes as well: not only did we have to say farewell to Paul Verhagen’s wisdom tooth, but our brilliant PR intern Jelle van der Weerd is also leaving us. Thanks for everything Jelle, you’re an amazing colleague, and a terrific person as well. You will be missed!