CoFoE: Hard vs Soft Power: Is it time for an EU Army? 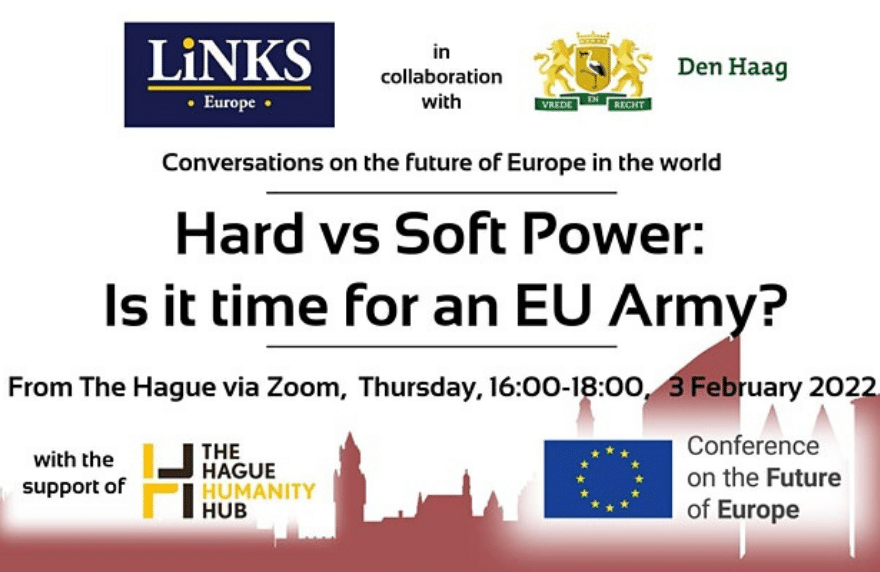 This policy dialogue will shine a light on the concept of an EU army, exploring the idea with the participation of experts and the public.

Since its establishment, the EU has relied on soft power and economic instruments as its foreign policy tools, leaving hard power to its member states, and the main Western military alliance, NATO. The concept of a European army is hardly a new one but has by and large remained, up to now, abstract; however, in light of the EU’s growing geostrategic ambitions, what was once inconceivable is now starting to gain ground.

In her 2021 ‘State of the Union’ address, the president of the European Commission, Ursula von der Leyen, noted that an EU defence force could be ‘part of the solution’ to the problem of a strategically autonomous EU. Following the heavily critiqued, US-led withdrawal from Afghanistan last year, this idea has once again started to gain traction.

However, what would such a development mean for the bloc? Has the EU truly exhausted its soft power instruments? What risks do such a development carry? Would it even be possible? And fundamentally, how do EU citizens feel about such a significant change to the nature of the bloc?

Participants to the policy dialogue will hear short presentations from several guest speakers, after which everyone present will be asked to contribute their views on the topic in short 1–2-minute presentations, followed by a general discussion. The opinions and ideas expressed in the meeting will be reflected in a short summary of proceedings, which will be submitted for consideration within the larger Conference on the Future of Europe.

This event will take place 16:00-18:00 on Thursday, 3 February 2022, virtually via Zoom. Registration is obligatory and can be done on Eventbrite.

If you have any questions, please direct them to office@links-europe.eu.

Preventing conflict in the Indo-Pacific: Opportunities for cooperation between...
Scroll to top