Time for Openness: a comparison of public reporting by security services 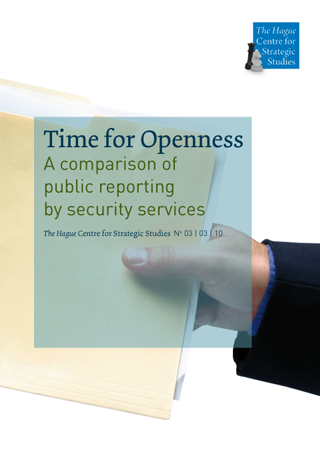 • The Swedish, Czech, Danish and Austrian services shield their information about security threats but are more open about their own activities.
• The German and Swiss services take the opposite approach: they are quite open about security threats, but less open about their own activities.
• The Dutch AIVD takes the broadest approach, as it is relatively open about both security threats and its own activities. Regarding the security threats, the following observations can be made:
• The threat universe appears to be similar for all services. They identify largely the same threat categories, except organised crime and animal rights extremism, which are not discussed by all services.
• The left-wing extremist movement is generally considered weak and fragmented.
• Although few services see right-wing extremist movement as more than a threat to public order, the movement is generally considered to be on the rise.
• All services emphasise the fragmentation of islamist extremism. Some (Sweden, Switzerland, Norway, the Czech Republic) see their countries as potential targets for attacks by islamist extremists, whereas others (Germany, Denmark and, until recently, the Netherlands) claim that their countries are logistical bases rather than targets.
• The two countries (Switzerland and the Czech Republic) that address organised crime report worrying tendencies of criminal organisations to infiltrate the legal and public sphere.
• China and Russia are considered the main espionage threats. Both countries take a broad approach and are engaged in different kinds of espionage (economic, technological, political, military).

Resource Scarcity in the 21st century: Conflict or Cooperation

Strategy and Change: A Narrative For The Age of Multipolarity
Scroll to top