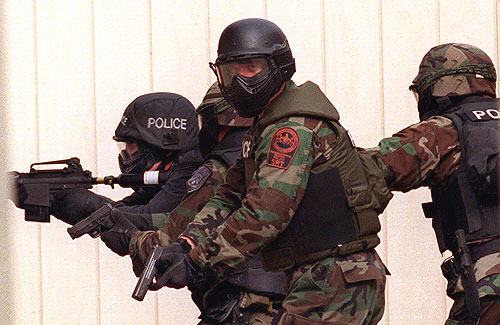 Outsourcing laundry services is fine, but what happens when private contractors need to use deadly force to protect their clients? Would you let a temp agency take decisions in your company that may have a long-term impact? The recent announcement by the Iraqi government to revoke the license of Blackwater USA in the wake of an incident that cost the lives of eight Iraqi civilians demonstrates the strategic impact civilian contractors are having on contemporary military operations.

With the rise of Blackwater to become officially part of the ‘total force’ concept, the US government has effectively outsourced part of its core-business. In total an estimated 100,000 contractors are active across the entire spectrum of the military deployment in Iraq. What remains unclear is where to stop using contractors between the “tail” and the “tooth” of the military deployment.

Last Sunday’s shootings in Baghdad are a terrible tragedy but also illustrate a more general perception among many: the downside of contractors on the frontline. Since the 1990’s the rise of private military companies has been closely related to the ‘transformation’ of the US military. The Clinton administration significantly downsized the number of military personnel, many of whom then found their way into the private sector. During Rumsfeld’s tenure a shift towards a lighter, leaner, more mobile force implied a further specialization towards high-intensity operations. The underlying business logic is simple: outsourcing to improve the flexibility of the defense organization.

From laundry services and catering to logistical support in the form of fuel transports or strategic airlift civilian contractors have long kept Western militaries up and running when deployed in the field. Prior to 9/11 this was coupled to the strategic argument that the US military should focus on major regional conflict. Then Afghanistan and Iraq happened. The US military became involved in the largest nation-building exercise in its history although it had neither the sufficient manpower nor the appropriate skill-sets in its ranks. With only 150,000 forces in a country the size of France the Pentagon outsourced many of the military tasks not directly related to ‘getting the bad guys’. Civilian contractors were necessary to construct schools, hospitals, bridges, roads, pipelines, factories. And to protect them as well.
The problem has become salient by a failed understanding of what it takes to achieve success in a counterinsurgency or stabilization campaign. ‘Winning the peace’ sometimes requires compromising on force protection. By contrast, the image of paid mercenaries protecting Americans at the expense of Iraqi lives does not win hearts and minds. Especially when contracts are based on the principle of ‘ends justifying the means’. Deadly force becomes an option, and civilian deaths among the Iraqi population now have made their government turn against the US mercenary regime.
Still, civilian contractors are here to stay, unless the US significantly increases its military. That is not all bad. They serve much-needed purposes, and last Sunday’s killings should be seen as exceptions rather than the rule. However policymakers need to understand the strategic impact private contractors can have. Incidents involving contractors are easily magnified and can compromise the success of the entire mission. We have in fact entered an era of the strategic contractor.

Current circumstances in Iraq make it painstakingly clear that civilian contractors at times operate without clear oversight and jurisdiction. Blackwater and others have in the past been involved in combat operations that go beyond the classic mandate of civilian contracting. The question must be answered to what extent this still serves the logic of outsourcing, and at what point the activities of such companies become a danger instead of an asset. Oversight is key to this. Western governments need to develop a system based on unity of command and jurisdiction when deploying contractors in conflict zones. Not only the strategic imperative is at stake, but also the innocent loss of life.