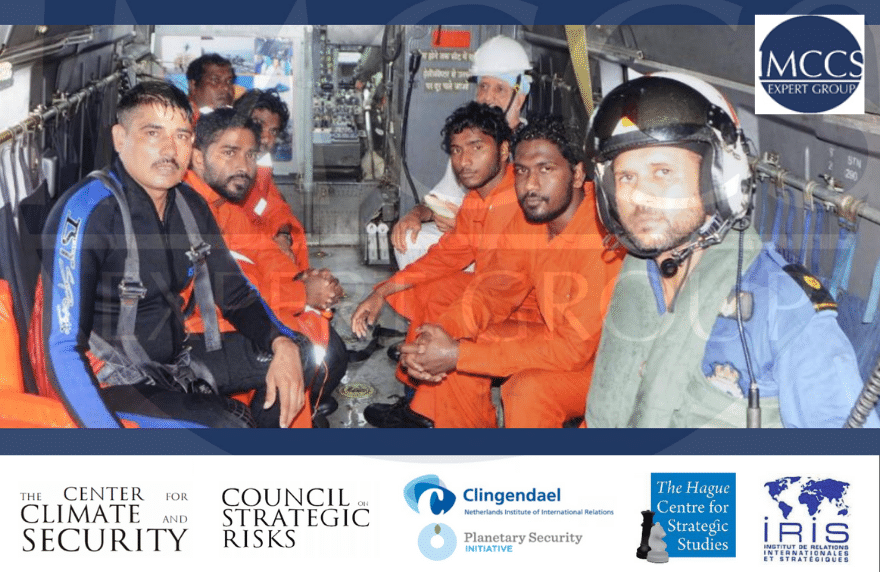 Today, the Expert Group of the International Military Council on Climate and Security (IMCCS) released two new reports, one on South Asia and the other on Southeast Asia, warning that climate change is threatening stability and security in the region, and calling for urgent action to both drastically reduce carbon emissions and prevent climate security risks.

The IMCCS is a group of senior military leaders, security experts, and security institutions across the globe – currently hailing from 38 countries in every hemisphere – dedicated to anticipating, analyzing, and addressing the security risks of a changing climate. The IMCCS is administered by the Center for Climate and Security, an institute of the Council on Strategic Risks, with the participation of a consortium of international partners. The two new reports complement two previously released documents, The World Climate and Security Report 2020 and Climate and Security in the Indo-Asia Pacific, with an added emphasis on the energy-climate-security nexus.

“We have entered an age in which multiple, converging risks define our security environment. In the Indo-Pacific region, climate change is the biggest long-term security threat.  I testified to this effect to the U.S. House of Representatives in 2013, and it’s even more true now. Climate impacts are getting more potent, dialing up the threats from existing conflict patterns and resource scarcities. At the same time climate projections are getting more precise. This combination of potency and precision translates into an obligation for militaries to anticipate, train, equip and prepare for increasingly dangerous climate security scenarios.”

“The future security and stability of the Indo-Pacific depends on how multiple, converging threats are handled in the context of climate and energy decisions. The more the region spends on coal, the more they will have to spend on disaster preparedness, disaster response and increased regional instability.”

Shiloh Fetzek, Senior Fellow for International Affairs at the Center for Climate and Security, and lead author of the Southeast Asia report, said:

“The security environment and physical environment around Southeast Asia are getting increasingly strained, and climate change will make these challenges more complex as it picks up pace over the coming decades. To preserve stability and prosperity, regional governments must recognize that climate change impacts will reverberate across the security spectrum, from geostrategic competition and domestic insurgencies to food security and urban challenges. Preventing the worst outcomes will require dealing with the problem at its source, and taking national security into account when considering energy policies, pathways and investments.”

Rachel Fleishman, Senior Fellow for Asia-Pacific at the Center for Climate and Security, and co-author of both reports, commented:

“South and Southeast Asian militaries are increasingly adept at responding to climate-induced disasters. But reactive strategies are not sufficient.  Climate change threatens the very systems that support modern life, from food, water and energy to governance and security. And the devastation it brings can empower those who seek societal disruption. Much more can and should be done to map and mitigate climate security threats before they escalate. The benefits of doing so will be measurable in terms of health, economic growth, and peace and stability.”

Sarang Shidore, Senior Fellow at the Council on Strategic Risks and lead author of the South Asia report, said:

“The Indo-Pacific region is among the most vital to American and global security. It is a region roiled by conflict and tension. But the biggest risk to its stability may be climate change. Joint action to meet this common emergency is essential to save lives and livelihoods, but can also serve as a pathway for regional cooperation between nations. There is not a moment to lose.”

While COVID-19 has understandably commandeered the globe’s attention for the past year, global greenhouse gas emissions have continued their rise unabated. This poses particular threats to Asia, one of the regions most vulnerable to natural disasters. With 2020 tied for warmest year on record, it’s clear that climate change risks are here now, and are accelerating. The situation could not be more urgent.

The new reports find that climate change is a threat multiplier for security in South and Southeast Asia. Climate impacts can induce or exacerbate physical and socio-economic stressors, leading to resource competition, health impacts, societal tensions and migration and displacement — which in turn can amplify existing security challenges or create new ones. Climate-related migration can stress densely-packed urban areas and increase intercommunal conflict and grievances with governments. It can also compromise scarce or shared resources such as river waters and fish, amplifying tensions between states or domestic provinces and ethnic groups.

Such scenarios are already playing out domestically in the Philippines, in the South China Sea, and in the context of the India-Pakistan and China-India security rivalries,  among other locations. In the India-Pakistan and China-India cases, contestations over transboundary rivers subject to climate-induced floods and droughts are worsening the already intense adversarial relationships between nuclear weapons states.

For militaries, climate change both impedes operational preparedness and expands military missions.  Military installations, like cities, are vulnerable to extreme weather which damages buildings, infrastructure and assets. Yet militaries must contend with such impacts even as they are called upon to perform additional humanitarian assistance and disaster response missions.  ASEAN has taken up coordinated disaster management and emergency response in its new Disaster Management Framework 2021-2025, and South Asia has the institutional framework to do the same in the broader regional organization, the South Asian Association of Regional Cooperation. Yet in both South and Southeast Asia, there is much more to be done.

The negative feedback loop between climate change and energy consumption patterns is particularly alarming. Temperatures above levels tolerable by humans and greater prosperity are driving demand for air conditioning, which in turn has contributed to a surge in energy demand.  The International Energy Agency reports that life-saving air conditioning is available in only 20% of Southeast Asian households and at even lower levels in South Asia. Yet with coal continuing to be a dominant power source, the region is trapped in a dangerous cycle of growing carbon emissions contributing to the global stock of carbon dioxide,  thereby fuelling ever-more-harmful climate security  impacts. Thus, addressing fossil fuel use will positively impact climate security, while neglecting to address it will exacerbate the climate security challenges in the region for years to come.

Read the online version of this press release here.

Deterrence in the 21st Century: Insights from Theory and Practice